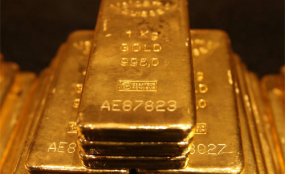 Chinhoyi — Government is working on a plan to establish a gold reserve set to anchor the introduction of a local currency when the right time comes for the return to the Zimdollar, it has been learnt.

This comes at a time when the country is grappling with cash shortages and economists believe the issuance of a gold backed local currency would help stimulate economic activity.

Modelled around the $200 million Afreximbank facility, which is backing the current bond notes in circulation, economists believe the local currency will ease liquidity challenges and stimulate aggregate demand.

Sabi Gold Mine resumed operations recently with targets to produce about 25kg of gold per month after a five-year hiatus caused by working capital constraints.

Mines and Mining Development Minister Walter Chidhakwa said the gold reserve would complement the Sovereign Wealth Fund, where a set of minerals would be reserved for future generations.

The legal processes that will give effect to the fund are still before Parliament.

“Naturally, in order to support the future introduction of our own currency, you want to have mineral resources that you hold in reserve,” said Cde Chidhakwa.

“We have discussed this matter with the Reserve Bank of Zimbabwe and what we are doing now, because most of the gold that is currently held is in private hands, we need to get our own companies operating.”

Government has full or part control of Sabi, Jena and Elvington gold mines, which have not been operating in recent years due to lack of capital.

Effort has been expended to resuscitate the companies, which are at varying levels of fruition.

Once all the companies owned by Government start operating, Minister Chidhakwa said they would be required to set aside part of their gold output to be kept as reserve by the RBZ.

He said Jena Gold Mine would soon take delivery of mining equipment to bolster its resuscitation, while other options were being looked at to bring on stream Elvington Mine in Chegutu.

This follows delivery of $7 million worth of equipment to the Zvishavane based Sabi Gold Mine.

“If it is along the lines of the Afreximbank facility, then it will give a lot of credibility to the currency because there is depressed demand for goods and products as people have no cash,” said Mr Moyo.

Demand, he said, should be at its highest owing to activities at the tobacco auction floors, but shortage of cash had dampened economic activity.

There are reports that some foreigners are taking advantage of liquidity constraints to bring in money and buy gold.

Some gold miners, including informal ones have in recent days been reported to be channelling their gold to the parallel market.

Minister Chidhakwa said contingent measures were being put in place to ensure that miners got their money as soon as they delivered to Fidelity Printers and Refiners.