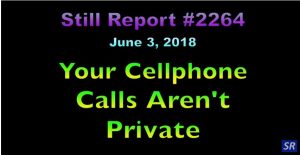 Good morning, I’m still reporting on: Your Cellphone Calls Aren’t Private, 2264 Synopsis: Just when we though that cell phone calls were private – no! According to the Cyber Guy, Kurt Knudson, an FCC working group has concluded that the software that allows telecoms to route your cell phone traffic from one cell tower to another is still using something called Signallng System 7 that dates from 1975 – and it’s full of holes. The FCC studied reports that German hackers were able to successfully penetrate SS7 to reroute the two-factor codes that banks use as their last line of defense to protect customers’ accounts. The result was they were able to drain bank accounts remotely. But that’s not the only problem with SS7.