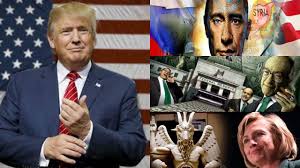 History is Being Made, the evil cabal is about to have a rude awakening when president trump brings their dark crimes into the light. Thank God for Donald Trump and his fight against Evil!
God Bless Donald Trump.

I know some of you don’t Agree with Trump or this video. Let’s just give him a chance, we need to see what happens. Some people think he is part of the NWO or this is all fake to trick people into following a false prophet, which may or may not be true.

At this point its too early to judge, lets watch this thing play out and see what happens!

If he turns out to be another Illuminati/ NWO puppet, i’ll be the first to jump ship and expose him!