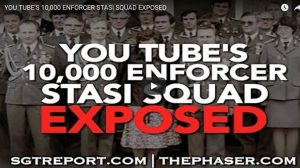 The You Tube PURGE of conservative channels has drawn mainstream media attention, and You Tube is calling the purge “a mistake”. Here’s the TRUTH about what is really going on. You Tube has formed its own 10,000 strong secret thought police that includes the enemy of Christianity, free specch and the second amendment, The Southern Poverty Law Center. Even though the Richie From Boston channel has been restored, dozens of other channels are still either terminated or under fire. Please Subscribe to my BACKUP channel: https://www.youtube.com/user/SGTreport Today You Tube PURGED the Richie From Boston channel. He HAD 150,000 subscribers. You Tube also terminated the Jordan Sather channel. The fascist “Winston Smiths” at You Tube are now targeting investigative journalist Jerome Corsi too. Is this discrimination of political speech legal? I guess it doesn’t matter if you’re an entity under the Google umbrella. Just ask former Google engineer and truth teller James Damore. Questioning the Florida shooting seems to be the common theme that brought these channels down. So in the spirit of stupidity and what ought to be a FREE PRESS, I’m going there too.