Working with nature to reduce pesticide use: Farmers around the world are rediscovering the increased yields offered by biodiversity

Working with nature to reduce pesticide use: Farmers around the world are rediscovering the increased yields offered by biodiversity

by Tracey Watson,published on Natural News, on March 25, 2018 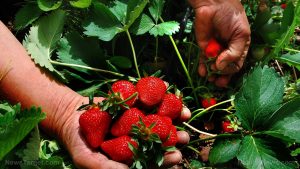 (Natural News) The face of agriculture has changed dramatically over the past century. Instead of working with what nature has provided, encouraging biodiversity and companion planting to ward off pests, farmers have been encouraged to use chemical fertilizers and pesticides, with disastrous results. Despite being promised greater crop protection and increased yields, the results have been low-yielding soil, an increase in soil pathogens, poor water utilization and devastating harm to insects, including the honeybee.

A study published in the journal Nature in 2013, found that pesticides cause “broad biodiversity loss,” damaging the habitats of invertebrates like mayflies and dragonflies in soil and streams, even when farmers stick to “safe levels.”

The tide is slowly starting to turn, however. Science Daily recently reported that farmers around the world have returned to working with nature instead of against it. (Related: Global food security at risk as crop biodiversity is lost.)

A study by researchers from Michigan State University (MSU) has determined that farmers who have taken proactive steps to increase the number of birds and other vertebrates on their land have been able to increase their crop yields, decrease their use of chemical pesticides, and provide a safe haven for endangered species. The study was published in the journal Agriculture, Ecosystems and Environment.

“Our review of research shows that vertebrates consume numerous crop pests and reduce crop damage, which is a key ecosystem service,” noted Catherine Lindell, an MSU integrative biologist and the study’s lead author. “These pest-consuming vertebrates can be attracted to agricultural areas through several landscape enhancements.”

The same research team earlier conducted a study in which they successfully lured American kestrels to some of Michigan’s cherry orchards and blueberry fields by installing nest boxes in strategic places. Kestrels hunt many of the species that cause the most harm on these types of farms, including European starlings, rodents and grasshoppers. They also chase away other smaller birds that damage fruit in cherry orchards.

In Indonesia, for example, farmers have been able to document increased cacao yields of 290 pounds – worth $300 – per acre. They have done this by encouraging more birds and bats to make their homes on their farms.

Jamaican farmers actively encourage birds in their fields, which in turn eat pests that destroys coffee crops. This has enabled them to save between $18 and $126 per acre, each year.

Farmers in New Zealand have taken this a step further, not only reducing the need for pesticides and increasing crop yields, but in so doing, protecting their only falcon species, which is endangered. Farmers have collaborated with the Marlborough Falcon Trust to reestablish these birds in grape-growing regions of the country, protecting their vineyards and the birds at the same time – a mutually beneficial arrangement for the farmers and the environment. (Related: If you are passionate about the environment be sure to bookmark Environ.news.)

“These scientists have demonstrated a win-win situation for farmers and birds,” said Betsy Von Holle, a director with the program that funded the MSU research. “Increasing native predatory birds in agricultural areas can help control insect pests that damage crops, potentially reducing costly pesticide use. For declining bird species, these efforts can increase the birds’ reproductive success while producing fruit crops attractive to consumers.”

The MSU team hopes that there will be “broad interest” shown by both farmers and environmentalists in refining and implementing these types of programs more comprehensively throughout the country.