Woman calls Nestle to inquire about fluoride in bottled water, recieves death threats for a month 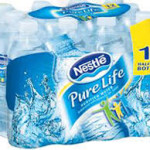 Woman calls Nestle to inquire about fluoride in bottled water, recieves death threats for a month

(NaturalNews) A woman who bought a bottle of Nestle’s Pure Life Water says she was threatened repeatedly by a company customer service representative who allegedly told her she would “slice her throat” and “watch the blood drain from you” after the woman called with questions about the product.

As a result of the alleged threats, Shimrit Ellis, the customer, filed suit against Pamela Vaughan, the customer service rep, and the company, Nestle USA, as well as Answernet Inc., in Philadelphia.

According to court documents, Ellis claims she bought the water on Aug. 5, 2012, then called Nestle’s customer service department to inquire about health issues related to fluoride.

“By way of example, inter alia, some of the treats [sic] that were made to plaintiff by phone were, ‘I’m going to slice your throat;’ ‘I finally found where you live and watched you go to work. You’re going to die;’ and ‘People are going to watch the blood drain from you when I stab you with a knife.'”

‘So outrageous in character’

In addition, the complaint said, Vaughan allegedly described the knife she planned to use to commit the murder.

“These are among many horrible threats to plaintiff,” said the complaint.

“Pamela Vaughan was so outrageous in character and so extreme in degree as to go beyond the pale of decency as is regarded as intolerable in a civilized society,” Ellis’ attorney, Warren Siegel, wrote in the suit.

Ellis said she was receiving calls like that at least three times per week for nearly a month. Finally, she decided to report them to the Philadelphia Police Department.

At that point, says the complaint, “Plaintiff’s phone records were subpoenaed by the police and the calls were traced to Nestle Tollhouse Call Center, which revealed they were being made by a female employee, later identified as Pamela Vaughan, to whom plaintiff lodged the original complaint about the ingredient/additive, fluoride, being in the bottled water.”

The Philadelphia Inquirer reported that, according to online records anyway, it did not appear as though Vaughan has been charged yet with any crime related to Ellis’ call.

The complaint said Ellis was seeking north of $50,000 for intentional infliction of emotional distress.

According to this ingredients list, Pure Life does contain at least some fluoride.