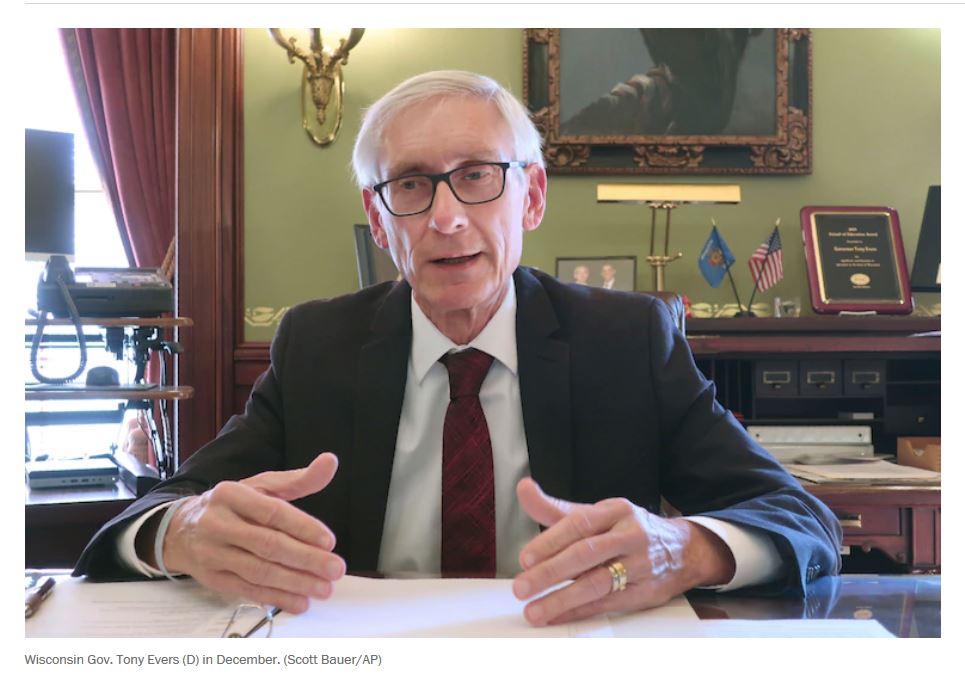 The Wisconsin Supreme Court’s conservative majority sided with Republican legislators and struck down on Wednesday the decision by Democratic Gov. Tony Evers’s administration to extend a stay-at-home order intended to quell the spread of the novel coronavirus.

The 4-3 decision limits Evers’s ability to make statewide rules during emergencies such as a global pandemic, instead requiring him to work with the state legislature on how the state should handle the outbreak.

The justices wrote that the court was not challenging the governor’s power to declare emergencies, “but in the case of a pandemic, which lasts month after month, the Governor cannot rely on emergency powers indefinitely.”

Evers condemned the court’s decision, saying in a statement that Wisconsin “was in a pretty good place” but now “Republican legislators have convinced four justices to throw our state into chaos.”

Like most other state governors across the country, Evers issued a stay-at-home order in March to slow the spread of the coronavirus. But as the April 24 end date approached, Evers’s administration decided to extend the order until May 26.

Shortly after, Republican state lawmakers sued Evers and Andrea Palm, the state health secretary, arguing that such long-term impact on citizens’ lives should be decided in concert with the legislature.

There was some initial confusion over whether the court had granted a stay until May 20, but it appears the decision takes effect immediately. The Tavern League of Wisconsin, which represents bar owners, told its members they can open now.

Justice Rebecca Dallet wrote in her dissent, “This decision will undoubtedly go down as one of the most blatant examples of judicial activism in this court’s history. And it will be Wisconsinites who pay the price.”

Coronavirus cases and deaths in Wisconsin continue to rise, with nearly 11,000 confirmed infections and 421 deaths related to the virus. Local officials in the city of Madison, as well as Dane and Milwaukee counties, announced they would be issuing their own stay-at-home orders through the end of the month.

The American Civil Liberties Union was among the advocacy groups that slammed the high court’s decision, noting the disproportionate impact the virus has had in minority communities.

“Public health experts have been clear that prematurely lifting social distancing measures will have serious and deadly consequences, especially for vulnerable communities,” Chris Ott, executive director of the ACLU of Wisconsin, said in a statement. “Today the Wisconsin Supreme Court chose to ignore those warnings, jeopardizing the health of all Wisconsinites and further endangering people of color and members of other vulnerable communities who already faced the greatest risk from this virus.”

The state’s highest court heard virtual oral arguments last week, in which several conservative judges signaled in their questions that they believed the Evers administration’s orders were an overreach of executive power.

“Isn’t it the very definition of tyranny for one person to order people to be imprisoned for going to work, among other ordinarily lawful activities?” asked Justice Rebecca Bradley.

At the hearing, an attorney representing the Evers administration pointed to a state law that gives the state health department the authority “to do whatever is necessary to combat a novel, deadly, communicable disease like the one we’re facing today.”

Meryl Chertoff, executive director of the Georgetown Project on State and Local Government Policy and Law, said in an email that the Wisconsin judges used a “technical and narrow distinction, poorly suited to the emergency Governor Evers confronted when the covid-19 epidemic emerged” to justify its decision.

“That is why governors have sweeping powers in public health emergencies and natural disasters,” she said. “This is the first time I have seen quibbling on this sort of technicality, even in the wake of floods, hurricanes and terrorist attacks.”

Republicans from the White House on down have urged the nation to end its widespread shutdown due to the coronavirus, turning the debate over when to reopen into a partisan one.

Wisconsin politics are especially bitterly divided, with a Democratic governor and Republicans in control of both houses in the state legislature.

GOP state lawmakers have challenged Evers’s authority since he was elected in 2018, stripping the executive of powers in the weeks before he was sworn in the following year. They challenged him again in the courts, and won, over a last-minute effort to postpone the state’s April 7 primary election in light of the coronavirus threat.

Other states with similarly divided governments are also trying to limit the governor’s power during this public health crisis. In neighboring Michigan, Republican legislators sued Democratic Gov. Gretchen Whitmer last week after she extended the state of emergency declaration through the end of May.

The nation’s highest court declined to get involved.