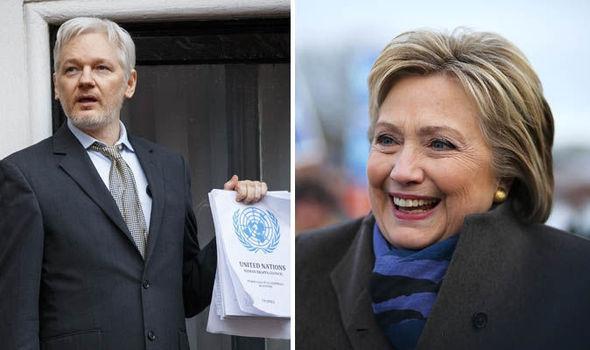 There’s an extremely serious dump of emails that came from Wikileaks exposing Hillary Clinton for ordering top US Diplomats to steal the DNA and passwords from United Nations leadership.

The stunning email comes from the account of Hillary Clinton that used the address “hdr22@clintonemail.com”.

Below is the Freedom of Information Act (FOIA) which released the email from Hillary Clinton, which references both Wikileaks, Julian Assange, and an article which had called for Hillary Clinton’s resignation over the 2009 spying scandal ordered at the hands of Hillary Rodham Clinton towards the UN while she was Secretary of State.

America truly dodged a bullet by avoiding the election of this wicked witch, and thanks to the newest tweet from Wikileaks dumping this story into the laps of the general public, they can be reminded just how corrupt the entire Obama regime actually was.

A 2009 article from The Guardian was also referenced in the Wikileaks tweet, which discussed the spying orders from Hillary Clinton against the-Secretary General of the United Nations Ban Ki-moon, as well as several members of the UN’s permanent Security Council of the United Kingdom, France, China, and Russia.

The top-secret intelligence campaign was ordered directly from Hillary Clinton and had at the time infuriated members of the UN, only to now be brought to light yet again by Wikileaks with the inclusion of the email from Hillary Clinton’s private server.

”It called for detailed biometric information “on key UN officials, to include undersecretaries, heads of specialised agencies and their chief advisers, top SYG [secretary general] aides, heads of peace operations and political field missions, including force commanders” as well as intelligence on Ban’s “management and decision-making style and his influence on the secretariat”. A parallel intelligence directive sent to diplomats in the Democratic Republic of the Congo, Uganda, Rwanda, and Burundi said biometric data included DNA, fingerprints and iris scans.”

”The secret “national human intelligence collection directive” was sent to US missions at the UN in New York, Vienna and Rome; 33 embassies and consulates, including those in London, Paris, and Moscow.”

”The operation targeted at the UN appears to have involved all of Washington’s main intelligence agencies. The CIA’s clandestine service, the US Secret Service and the FBI were included in the “reporting and collection needs” cable alongside the state department under the heading “collection requirements and tasking”.”

So much for the whole “Russian collusion” and “Russian interference” narratives, when this further implicates the American intelligence community in literally attempting to steal the DNA and biometrics of members of the UN Security Council.

What a time to be alive, as the “Deep State” continues to be exposed.

The audacity of this woman is beyond disturbing and it’s as if with each passing day we find out that yes, she’s even viler than we initially believed, despite doubting that a person could possibly be any more corrupt.