Why ISON Is So Significant to Crop Circle Creators

Many different images of comet Ison or its orbital path were drawn in crops, long before that comet was discovered by astronomers on Earth in September of 2012: why is it so significant to the crop artists?

“Until they see a UFO in their telescopes, they will not believe”—Chinese scientist friend, commenting on the narrow-mindedness of most professional astronomers

The modern crop-circle phenomenon is one of the most enigmatic and misunderstood occurrences in all of human history (for recent reviews, see /time2012a or time2012b). Still it is our underlying ignorance of cosmology which makes “crop pictures” seem mysterious and hard to understand, not the field images themselves.

What exactly defines “our space” and “our time”? Could intelligent species (or even humans) from another space or time send us pictorial messages in the fields, by means of spacetime wormholes? Indeed, might such field images sometimes predict the future?

Images of near-future events are sometimes drawn in crops, consistent with the use of spacetime wormhole technology

The extra-terrestrial crop artists seem to possess spacetime wormhole technology. By means of such technology, they have occasionally revealed certain details of the future to humans on Earth. For example during the summer of 2010, we saw images of “nuclear power” or “radiation in the landscape” drawn in crops. We even saw a “lunar clock with an atomic hour hand”, indicating the month of March 2011. Many such images were drawn in crops, nine months before a nuclear power disaster happened at Fukushima during the suggested month of March 2011 (see japantsunami2011). There was no specific mention in crops, however, of its geographical location in Japan.

Here we will present a series of English and/or European crop pictures which seem to show images of comet C/2012 S1 Ison, as well as its orbital path through our solar system, long before that comet was discovered by astronomers on Earth in September of 2012, Field images of “comet Ison” began to appear in 1996, and were quite numerous by 2008 or 2009. Additional images continued all throughout the summers of 2011, 2012 or 2013.

We cannot be sure that every crop picture to be discussed below was paranormally made. Yet in some cases, they show such distinct images of the future, that no other possibility seems plausible. No other major comets have appeared in Earth’s sky since 2007, and many of the sky images for comet Ison as drawn in crops tell exactly where it will be located in space (or in Earth’s sky), many years later. The scientific case for future-predictive crop pictures is thus very strong.

The earliest crop picture to show “comet Ison” appeared at West Overton seventeen years ago on July 13, 1996. There we could see a small “comet” flying past our Sun and Moon, in the exact sky location which comet Ison will occupy on December 3, 2013: 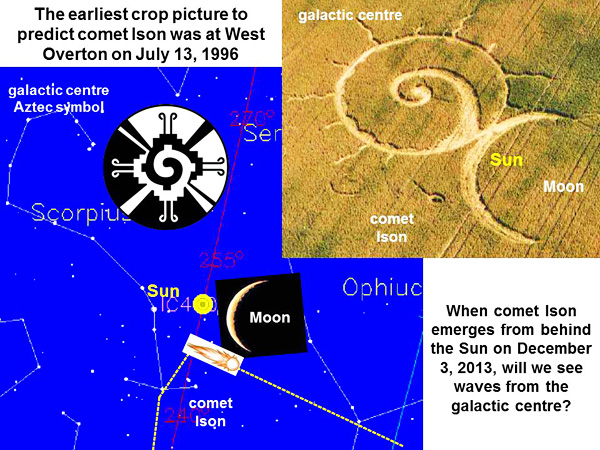 Nearby we can see an Aztec symbol for the galactic centre, from which many “small waves” are emerging. Will we see actual waves from the galactic centre on that day, when comet Ison emerges from behind the Sun? Might this happen because a large cloud of gas called “G2” has just entered a black hole at the galactic centre, as viewed from Earth? (see www.ast.cam.ac.uk/content/dating.our.galaxys.dormant.volcano or discovermagazine.com or waylandsmithy2007a or time2007m).

Images of comet Ison in crops from 2008

The next major crop picture to predict “comet Ison” appeared in the summer of 2008. It showed a bright comet passing Earth and Moon, eleven months after the Mayan Long Count calendar would end on December 23, 2012: 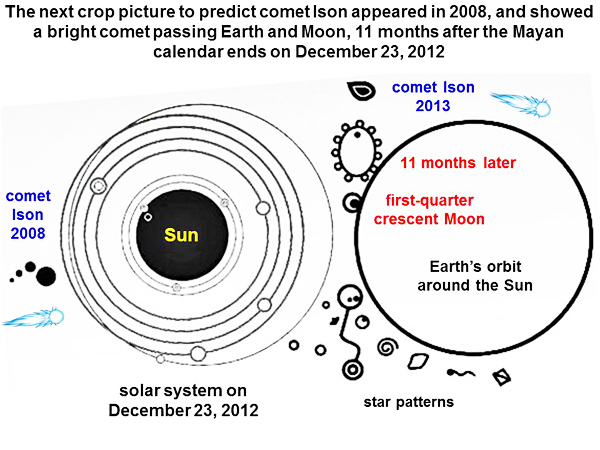 On the left-hand side of that crop picture, we can see a schematic image of our solar system from Mercury to Pluto. for a calendar date of December 23, 2012. On the far left we can see where comet Ison was located in 2008, headed our way. The central “Sun” image from that crop picture became slightly larger when going from Phase I on July 15, 2008, to Phase II on July 22, 2008. Might such an “enlargement of the Sun” represent a prediction of high solar activity in December of 2013? Or was it meant simply to help us interpret the right-hand side, which shows comet Ison passing the orbits of Earth or Venus eleven months later?

On the right-hand side of that crop picture, we can see a bright comet passing Earth’s orbit around the Sun in late November of 2013, eleven months after the Mayan calendar would end on December 23, 2012. It will be a first-quarter crescent Moon. As an alternative interpretation, the right-hand side of this crop picture might show comet Ison, not far from Venus’s orbit around the Sun in late December of 2013, and a crescent shape for planet Venus (see the various images available on ssd.jpl.nasa.gov).

Near the bottom of this crop picture, we can see a series of detailed star or constellation patterns, which will be analysed further below.

Interestingly enough, the left-hand side of Avebury Manor could be “flipped” to reveal the orbital location of comet Ison in 2008, far beyond the orbit of Saturn: 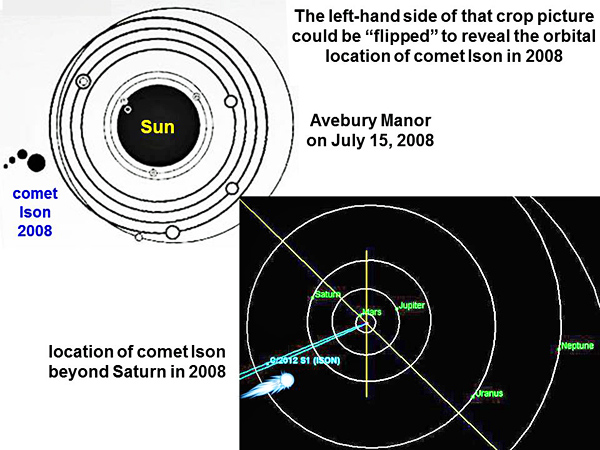 The right-hand side of Avebury Manor (near the bottom) then showed a series of detailed star patterns, which reveal the exact path of comet Ison through Earth’s sky in late November of 2013: 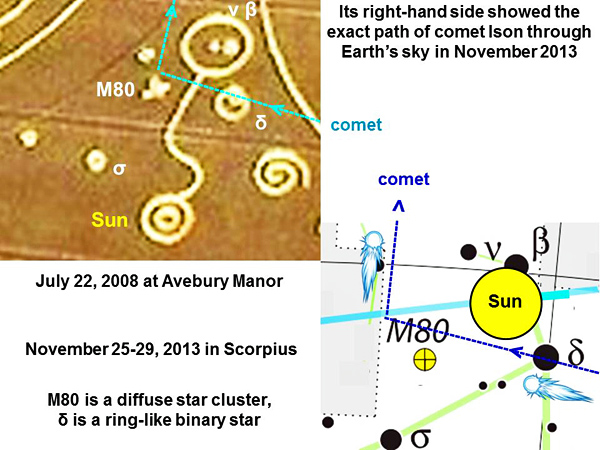 Several other symbols which were drawn there (“serpent”, “snail”, “spiral”, see above) may represent various constellations through which comet Ison will pass, on its long voyage through our solar system. Their “serpent” symbol could represent our modern constellation Serpens, through which comet Ison pass in early December of 2013 (see in-the-sky.org). Another of our modern constellations (Draco) was called “the snail” in ancient Babylon (see www.hwg-astro.de). Comet Ison will pass through the constellation Draco (or “snail”) in late December of 2013 (see www.aerith.net). Finally, comet Ison may trace out a “spiral” in Earth’s sky during 2014 or 2015, depending on how its orbit is affected by passing around the Sun.

Images of comet Ison in crops from 2009

Two crop pictures from the summer of 2009 next showed comet Ison flying “like a swallow” through Earth’s skies, sometime after the Mayan calendar ends on 13.0.0.0.0: 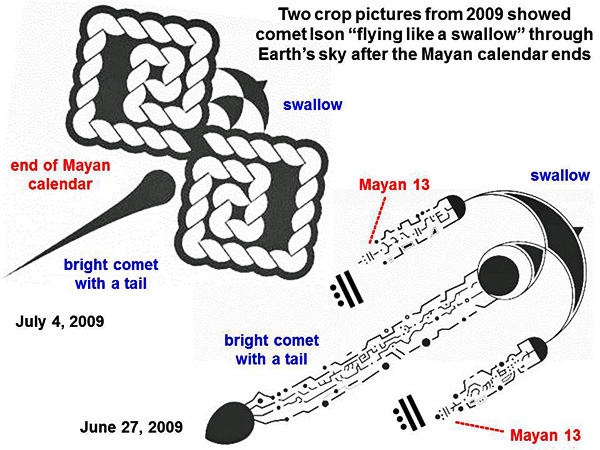 Another comet-related crop picture came down near Milk Hill in two separate parts or phases. Its first part on June 21, 2009 asked us to look up into Earth’s sky using a “sextant”, two years later on June 2, 2011. Then we would see five planets from Mercury to Uranus, plus the Moon, all lined up in a row: 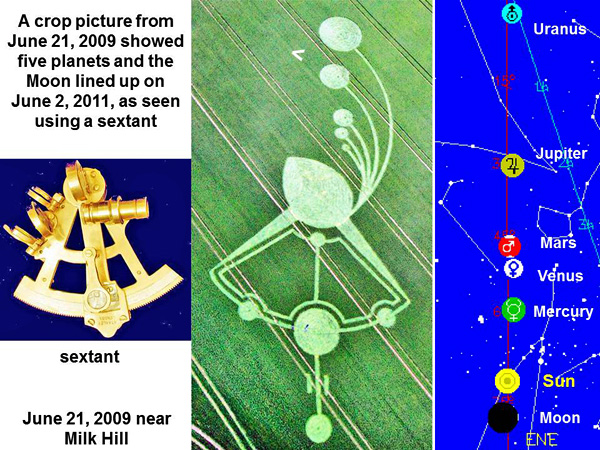 The second part of that crop picture on June 23, 2009 showed a “new comet” near Mars and Jupiter. This unexpected event happened four years later during September of 2013, with the novel appearance of comet Ison: 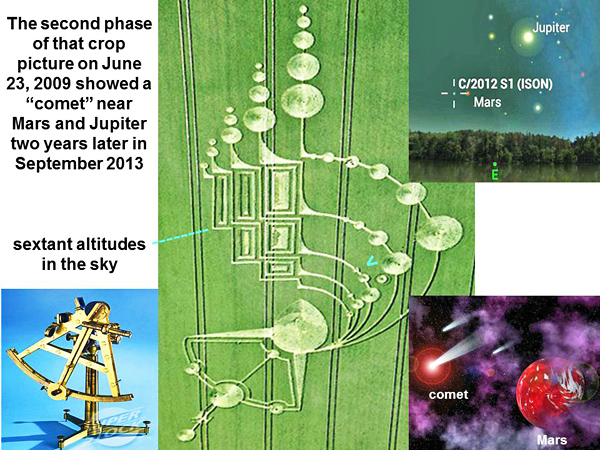 Another small crop picture on June 23, 2009 near Milk Hill (not shown) described the new comet as an “Aztec star in the night”.

Two clever codes for comet Ison within the Quetzalcoatl Headdress of July 5, 2009

One of the most famous crop pictures of all time was the “Quetzalcoatl headdress” of July 5, 2009. This crop picture, when studied carefully, seems to show comet Ison flying past our Sun like a “serpent” on the Mayan date of 0.0.0.17.0, which equals November 28, 2013 in our Western calendar: 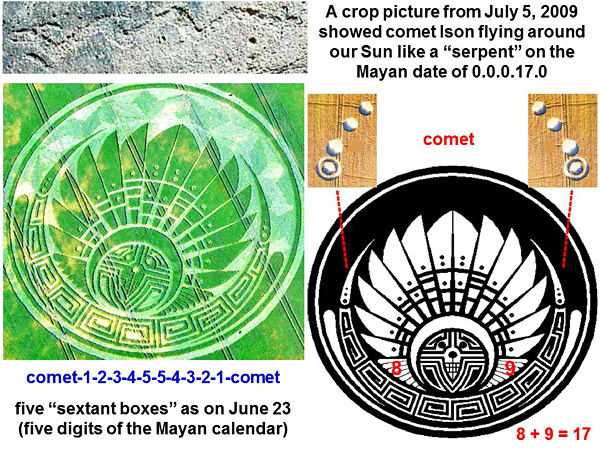 Their July 5, 2009 crop picture showed a large, round “Sun” (the face of Quetzalcoatl) just below its centre, with an equally large “lunar crescent” drawn slightly above. On either side of the “Sun” we can see 8 or 9 small wedges, which add together to give 17 wedges in total, and suggest a Mayan date of 0.0.0.17.0.

Near the top of this crop picture we can see a zig-zag “serpent”, which is called “Awanyu” by north American tribes. The path of that “serpent” suggests a motion of comet Ison through Earth’s sky from right to left.

Close to the outside on both left and right, we can see “pointed three-dot” comet symbols, which have been joined to five “sextant boxes”, just like those which were drawn on June 23, 2009 near Milk Hill. In this case, those five boxes seem to possess a second meaning as five digits 1-2-3-4-5 of the Mayan Long Count calendar.

Finally on the very outside, both left and right, we can see two large “comet” shapes. This seems to leave no doubt: the crop picture concerns itself with the appearance of a “comet”!

The central part of this remarkable crop picture shows a Mayan feathered headdress, with seven quetzal feathers on each side, just like that worn by Aztec emperors such as Moctezuma. It also contains a clever dot-and-dash code in the shape of a Mayan pyramid: 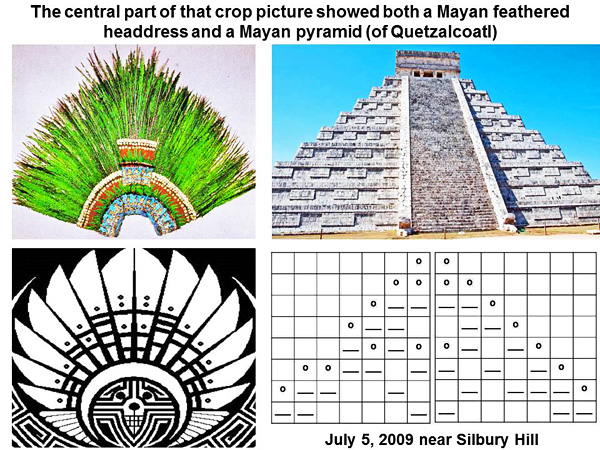 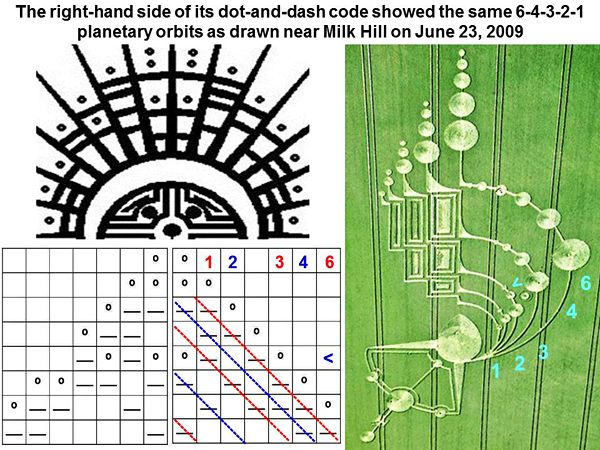 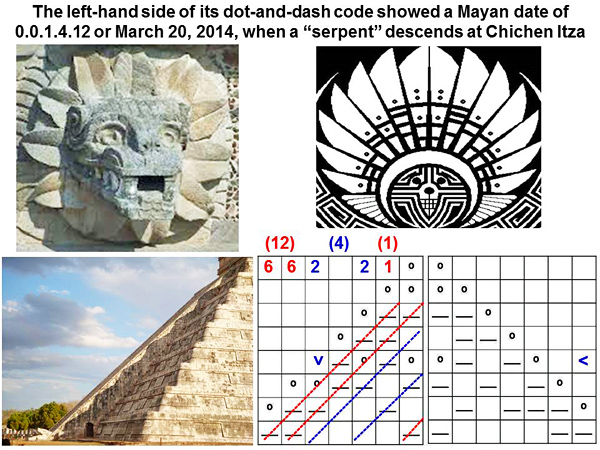 On the spring solstice of March 20, 2014, a metaphorical “serpent” will descend from heaven to earth along one face of the Pyramid of Quetzalcoatl at Chichen Itza. In the crop picture, we can see how one of seven “dots” along the left-hand side has “descended” from its linear alignment with six other dots (see the downward-pointing blue arrow). Might such symbolism suggest a change in the orbit of comet Ison, after it goes behind the Sun on November 28, 2013? Or a near-future descent to Earth of the real Feathered Serpent?

A related crop picture at Chesterton Windmill on July 9, 2009 (four days later) showed three long diagonal lines on each face of a triangular pyramid, which was rotating inside of a sphere (see fringe2013n), Those three diagonal lines appear similar to the thin, red or blue lines which were drawn in several slides above. At Chesterton Windmill, the triangular pyramid was drawn rotating clockwise from right to left, just as for that “serpent” near the top of the “Quetzalcoatl headdress” on July 5. All three crop pictures therefore: near Milk Hill on June 23, near Silbury Hill on July 5, or near Chesterton Windmill on July 9, show different aspects of the same underlying symbolic information.

During mid-October of 2013, there was a triple conjunction (or joining in Earth’s sky) between comet Ison, planet Mars and a bright star Regulus from the constellation Leo. We can see a night-sky photograph of that conjunction in the slide below, along with a schematic diagram at lower right: 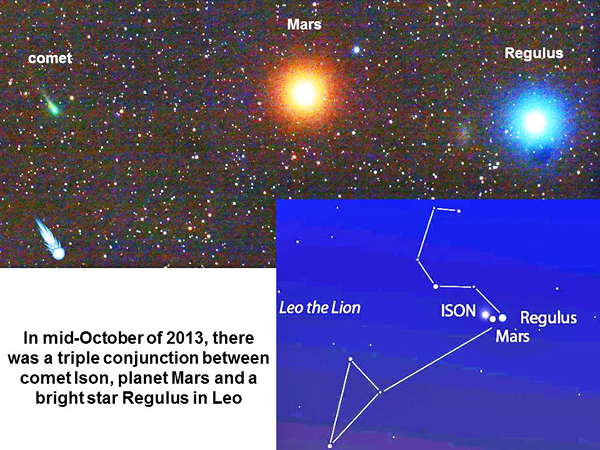