Why is Facebook trying to force you to use its Messenger app?

Why is Facebook trying to force you to use its Messenger app?

Soon Facebook’s smartphone users will have to install its separate app to chat, as social network phases out mobile web version. But what’s in it for Zuckerberg and co?

by Samuel Gibbs, published on The Guardian

Facebook is forcing users of its mobile site to install its separate Messenger app if they want use chat, just as it has already done for users of its Android and iOS app.

The Facebook app for Android and iOS began encouraging people to install Facebook Messenger in August 2014. Some users switched to using the Facebook mobile site on their phone browser instead, which still had Facebook’s built-in chat – but now that mobile site work-around has been marked for death, too. Facebook is prompting users to install its Messenger app, while warning it will be their only option soon. The change should also affect web wrappers such as Metal, which is currently blocking the warning message.

Facebook says the move is to give chat users the “best experience” possible. A spokesperson said: “Since [2014], we’ve worked hard to make Messenger the best way to connect with the people you care about by adding video calling, conversations with businesses, gifs and much more. [Messenger] helps messages load about 20% faster and enables richer interactions.”

The dedicated app has features and functions that are not available in the mobile web version, including the ability to send and receive regular SMS messages on some platforms, video and voice calls, as well as Facebook’s floating notification and chat boxes, called Chat Heads. Whether it provides a better experience remains a point of debate, particularly given that there is no obvious reason why it couldn’t remain baked into the primary Facebook app. Either way, there’s not a lot you can do about it other than install Messenger, Facebook Lite if it is available to you, or stop using the service.

Why push users into another app? 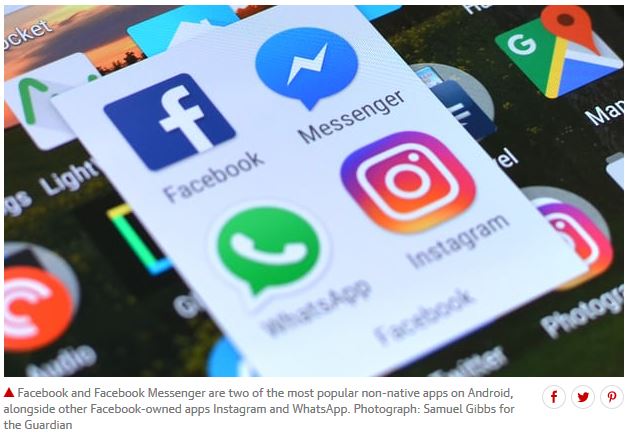 The real reason that Facebook is pushing chat into its Messenger is to create another platform or silo from which Facebook can access you as a user. This might seem an odd decision on the surface, but viewed through the lens of a company that wants to spread its tendrils as far and wide as possible, it makes sense.

It’s the same reason Facebook bought WhatsApp. On the one hand the dedicated chat app competes directly with Facebook Messenger, and potentially the low-level Facebook social network experience. However, it also targets users who are not interested in Facebook. The overlap between WhatsApp users and Facebook users is likely very high in the West, but outside of the developed world WhatsApp has excellent penetration with users who do not use Facebook.

Facebook also has Instagram, which is not as far removed from the core Facebook experience as WhatsApp, but started life as a separate photo-sharing social network and only recently became more tightly integrated with Facebook.

It’s still a standalone app, and you don’t have to have anything to do with the Facebook social network to use Instagram, which means it can attract users who don’t want Facebook but do want to share photos.

Messenger is the hardest sell as a separate service from the main Facebook social network, but in June last year the company made it so that a user could sign up and use Messenger with just a phone number. It means users who don’t want a Facebook account can still chat with their Facebook-using friends. It also gives Facebook another phone number and personal data on another user.

Gather users from far and wide

Chat apps are only as good as the number of people using them. Facebook Messenger has the peer pressure of being the chat system of Facebook and the billion or so users on its site, but can now act as a gateway into the Facebook experience for those who have resisted joining the social network.

Facebook’s end goal is to reach as many people as possible by any route available. The company’s siloed app platform play is smart because it means it has more irons in the fire at any one time. Should people stop using Facebook, they might continue using WhatsApp, Messenger or Instagram. Meanwhile Messenger users are more than likely to be persuaded to hit that button to upgrade to a full Facebook account.

For Facebook to do more with Messenger and make it a service users cannot avoid, it is imperative to get as many people logged into the service and using the dedicated app as possible, which is why it is closing off access to chat via other routes. Since it started doing so, Messenger use has jumped from 200 million to 900 million users in two years.

If Facebook can convince every one of its 1.09 billion daily active users to install Messenger, it suddenly has a third potentially powerful platform along with the social network and WhatsApp, further strengthening its insurmountable global reach.

At that point Facebook can attempt to use Messenger for more than just chat. The company’s foray into artificial intelligence and chatbots is a good example, but delivery of news, payments and voice calling could be just the tip of the iceberg.