Why Do Tibetan Monks Wash Away The Mandalas They Create?

Why Do Tibetan Monks Wash Away The Mandalas They Create? 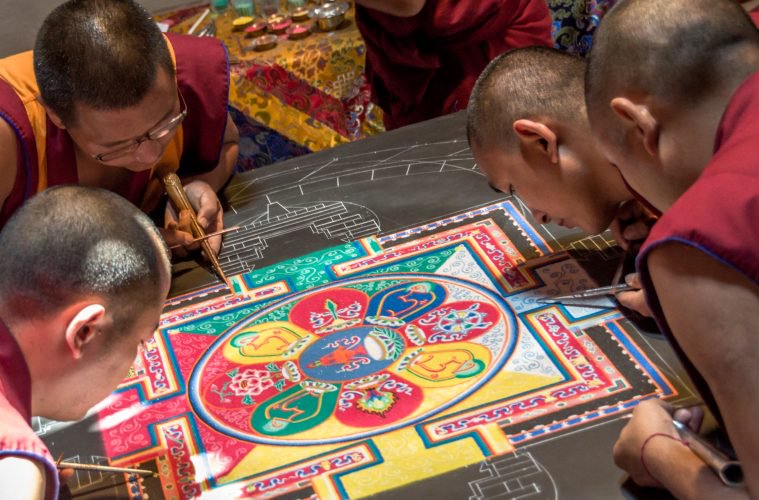 Imagine making something so time consuming, so intricate, so special that you put all your talent, energy, and attention into it for hours or even days. Now imagine admiring the finished project, only to destroy it moments later.

Wouldn’t that feel like a waste of time? An aggressive, distorted attempt to control? According to Tibetan monks, it’s quite the opposite.

In a day and age where time is of the essence, and our patience runs thin, consumerism has allowed us to have whatever we wish at the click of a button. We spend our well-earned money to have things. Crafting is then an outdated and under-appreciated, yet incredibly empowering and respectable route for not just making things for yourself or others, but learning how to make them in the first place. It’s the journey, if you will.

So, why would you ever want to destroy something that took a lot of time just to learn how to do, never mind the actual act of doing it?

Buddhist monks in Tibet create mandalas — incredibly detailed geometric designs made out of coloured sand — by building them out, grain-by-grain, as a form of meditation.

The creation of the mandala is meant to represent the world in divine form, in which everything is perfectly balanced and designed. Literally translated as “circle,” the mandala is a representation of wholeness, as the distance from its center to all points on it remains the same, no matter where it’s measured.

The process of creating a mandala is rigorous, requiring millions of pieces of sand to make a five-by-five foot square mandala. Vivid colours and ancient symbols are incorporated into their work, the monks bending over the piece for hours as they drop one grain at a time into place to create the detailed symbolic patterns. Once the last grain of sand has been placed, the monks pray over their creation, and then the entire mandala is swiftly swept away, with handfuls given to participants of the closing ceremony, and the rest thrown into the nearest stream.

The point is to let go of what once was, because nothing is permanent — not the mandala, not your suffering, not the shoes on your feet, nor the smile on your face at this moment in time. Everything is constantly moving, called to balance and enlightenment. This realization allows you to forget the small things, and focus on the bigger picture. This shift in consciousness opens the doors for more wisdom, and for boundless compassion. It is beyond greed, status, or world dominance, religion or opinion, comfort or discomfort. When the walls of permanence are shattered, the real journey begins.

And that is the lesson this process teaches. Destroying their creation is a small price to pay for hours and days spent breaking down those walls and celebrating the stream they, and we, are in.

2 Comments to “ Why Do Tibetan Monks Wash Away The Mandalas They Create?”