Why Brad Pitt is so mad

Why Brad Pitt is so mad

by Christine Roman, published on CNN Money, on December 11, 2015 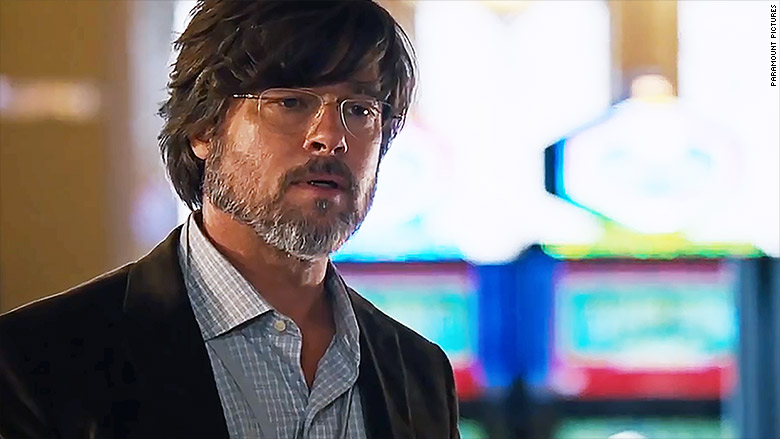 Brad Pitt stars as an investor who made a massive profit on the 2008 financial crisis.

Seven years after Lehman Brothers collapsed, “This ‘greed is good’ mentality is still alive and well,” he says.

Pitt produced and co-stars in the screen adaptation of Michael Lewis’s mortgage crisis book, “The Big Short.” He says he doesn’t love to walk the red carpet, but made a point to for this film. It’s an effort to decode Wall Street’s insider language and show the financial crisis from the perspective of the real life story of a handful of odd-balls and outsiders who saw the housing bubble’s financial engineering and worked hard to profit from it.

“I’ve watched all the documentaries and I’m still trying to understand it all. And it wasn’t until Michael Lewis’ book that really helped me get to the bottom of the rabbit hole to see what was going on,” Pitt says.

He says he was angry about the financial crisis before he read Michael Lewis’s book. He optioned the rights to the film, and was even angrier after he read the screenplay.

“Yeah I’m angry. You see families put out on the street and losing their savings and mortgages and not knowing why. This film attempts to explain it.”

Explain it, in some novel ways. The film stars Ryan Gosling as a Wall Street trader who looks directly into the camera to translate mortgage-backed securities. (Yes, I said Ryan Gosling and mortgage-backed securities in the same sentence.) It’s a gimmick filmmaker Adam McKay also employs actresses Selena Gomez and Margot Robbie and CNN’s own Anthony Bourdain. McKay departs from the action of his rag-tag band of short-sellers to turn to various celebrities to be translators of Wall Street lingo. Bourdain demonstrates the slicing and dicing of mortgages into tradable securities at a hibachi grill with rotten fish.

“I think it is the language of power. It is what drives the world. I think they (Wall Street) love that half of the people find it boring or feel too stupid,” McKay says. “This subject affects (our) lives more than all the reality shows, sports programs, gossip, everything you can combine.”

“It’s a language that was created … to kind of separate the banks and the institutions from the people, so they wouldn’t really understand. It makes people feel stupid. It’s easy to not understand,” he says. “I didn’t know much about the 2008 crash. I knew that it happened. I knew the ramifications,” he says, but after working on this film, “It’s frustrating and terrifying.”

Carrell plays an angry pessimistic hedge fund manager with unrelenting paranoia, convinced he is getting screwed by the big banks. He bets against the housing market and screws them back, but even that doesn’t make him happy, because by winning against the banks he knows the American people are the ultimate losers. Christian Bale plays a one-eyed, barefoot investing savant betting everything on a housing crash. The film blasts the banks and ratings agencies and skewers everyone from mortgage brokers to bond salesmen and Washington policymakers. The material is heavy, the fallout catastrophic, the actors angry. But curiously, the film is often funny. Just this week it was nominated for a Golden Globe award as a comedy.

The film is more strident than Michael Lewis’s book, but the conclusion of each is the same: It took outsiders and pessimists to see the truth, because the insiders were making too much money to care. 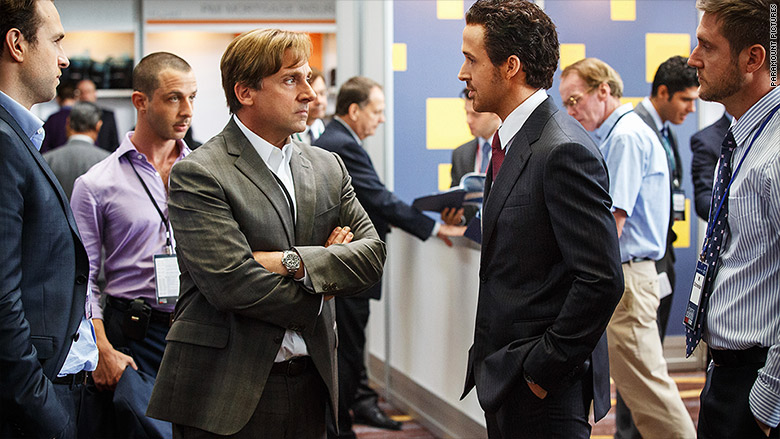 I asked Lewis why this movie matters seven years after the crash. After all, stocks recovered and rose sharply for six years. Twelve million jobs have been created, and home prices are rising.

“I don’t think the culture has entirely processed the event because there wasn’t a reckoning. There wasn’t a punishment,” Lewis says. “The banks are bigger than they were before. There’s been attempts on the margins to kind of rein them in, but it requires internal vigilance of the society when you have these institutions that are this big and this powerful to stop them from doing something bad again,” he says.

So have Wall Street and the public learned a lesson?

“I’m hopeful at some point we’re going to sort out our relationship to finance and money. It will be a healthier system. Do I think it’s going to happen real soon or out of this campaign? No. If it didn’t happen in the heat of the moment, it will probably take another crisis.”