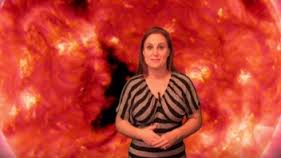 The Earth continues to be slammed this week by a huge solar storm that has raged for several days, Dr. Tamitha Skov of the SpaceWeather.TV reports today.

It started on September 7 and has kept us at moderate storm conditions nearly continuously since. Spectacular aurora has been spotted down to Germany (in Europe) and Pennsylvania (in the USA) and aurora photos keep coming.

See the source of this lengthy storm, get an update on its ongoing effects, and learn how much longer we can expect it to last: