The Standing Rock Sioux are inspiring the world with their resistance against the pipeline. But it’s not just Big Oil and Gas that they’re opposing.

By Jo Miles, Hugh MacMillan, published on Food and Water Watch, on September 6, 2016 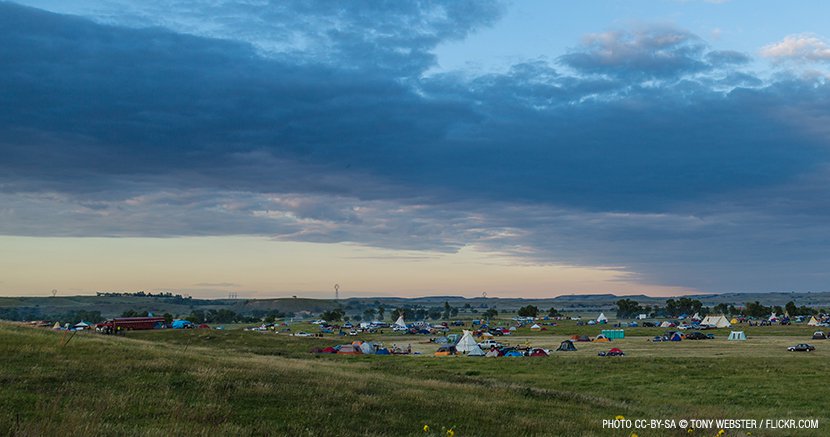 When the Army Corps of Engineers issued a permit for the 1,100-mile Dakota Access Pipeline in July, executives at the corporations behind the plan probably thought their path forward was clear. They’d moved easily through the permit process, seemingly dodging the concerns of people affected by the pipeline, and were ready to go ahead with construction.

But the communities in the pipeline’s path, especially local tribes, had other ideas. Thousands of people, mostly Native Americans, have converged at the Standing Rock Sioux Reservation in North Dakota in an effort to stop the pipeline from being built. The Standing Rock Sioux call the pipeline a black snake, and they know that if it were to rupture and spill — a serious risk, given the well-documented history of pipeline leaks in the U.S. — it could poison their drinking water and pollute their sacred land.

As we will detail, the Standing Rock Sioux are not just up against the oil and gas industry and the federal government, as daunting a challenge that alone would be. They are up against the many of the most powerful financial and corporate interests on Wall Street, the profit-driven institutions that are bankrolling this pipeline plan and so many others like it throughout the country.

The pipeline company disrupted the peaceful demonstration this weekend when its security firm unleashed violence on the activists, attacking them with dogs and pepper spray. The tribes are standing strong in their unity, and won’t give up despite these frightening and horrifying developments.

These courageous activists need your support. Will you join them in calling on President Obama to deny the Bakken Pipeline?

Powerful oil and gas companies are taking appalling steps to override the Sioux’s objections, using their immense financial resources to push for building this pipeline, which will further line their pockets. But behind the companies building the pipeline is a set of even more powerful Wall Street corporations that might give you flashbacks to the 2007 financial crisis.

Here are the financial institutions banking on the Dakota Access pipeline:

Seventeen financial institutions have loaned Dakota Access LLC $2.5 billion to construct the pipeline. Banks have also committed substantial resources to the Energy Transfer Family of companies so it can build out more oil and gas infrastructure:

All told, that’s $10.25 billion in loans and credit facilities from 38 banks directly supporting the companies building the pipeline.

These banks expect to be paid back over the coming decades. By locking in widespread drilling and fracking in the false name of U.S. energy independence and security, the banks are increasing our disastrous dependence on fossil fuels.

How Standing Rock Sioux are Fighting Back

The focal point of the resistance is at a camp outside the Standing Rock Sioux Reservation in North Dakota. Thousands of people, most of them Native Americans, have gathered in nonviolent demonstration to stop the pipeline’s construction and protect their land and water. In August, youth from the tribe finished a 2,000-mile relay run to Washington, D.C., to bring their message to the White House in their own show of opposition. The tribe is doing everything in their power to stop this pipeline.

Even before Dakota Access’s security turned violent, the activists faced harsh responses as Governor Dalrymple has declared a state of emergency, removing water and sanitation resources from the reservation, and the police have set up roadblocks around the reservation. Dozens of protesters have already been arrested, and police have spread false rumors of violence from the peaceful protectors.

But it’s the company, not the activists, that’s guilty of violence. This weekend, security sprayed activists with mace and released guard dogs into the crowd – even a pregnant woman was bitten by a dog. Democracy Now! captured disturbing footage of the attack.

In the aftermath of such violence, we can’t lose sight of how remarkable this gathering is: in a historic show of unity, over 188 Canadian First Nations and American Indian tribes have come together to support the Standing Rock Sioux’s effort to stop the pipeline.

Philip J. Deloria, a professor of American Culture and History at the University of Michigan, sees the fight as historic:

“The whole thing is kind of amazing, really. It’s a conjuncture of local organizing, social media activism, tribal-generated intertribal solidarity, semi-traditional ‘march on Washington’ strategies, and alliances with environmental and other political action groups… I think a lot of Indian people are seeing it as a moment of new possibility.”

Energy Transfer Partners is pushing ahead with their construction — and in North Dakota’s dirty-energy-oriented economy, these corporations have the backing of the political establishment. In contrast, the activists stand against them with only their bodies, protecting their sacred land and water by physically standing in the way of the construction.

We all owe these activists our support. Communities all along the pipeline route have been carrying out their own protests, and Food & Water Watch has been working with the Bakken Pipeline Resistance Coalition to block the proposal since it was first announced in 2014. Now, as the pipeline is being built, we’re asking everyone to call on President Obama to intervene. 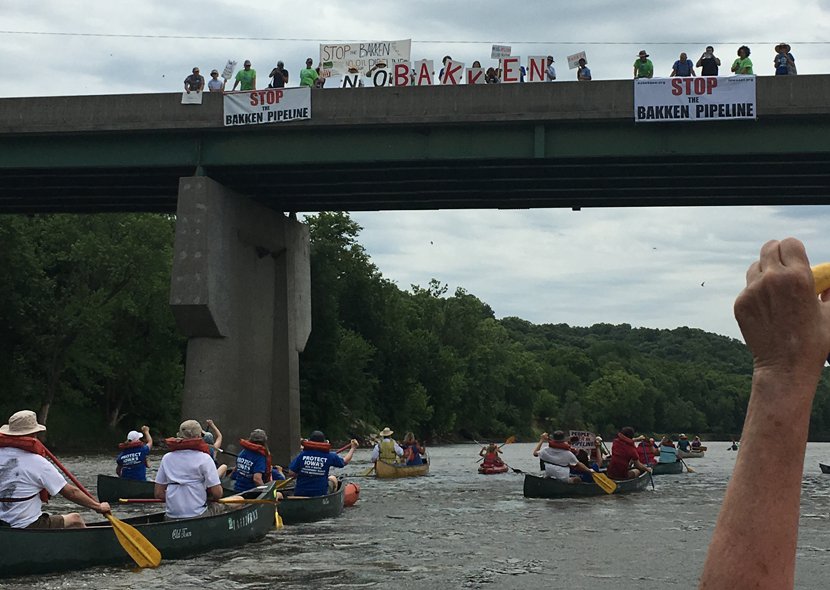 The Problems with Pipelines

Oil pipelines are inherently dangerous, and threaten our communities and environment with spills and explosions. They boost corporate profits and increase our dependence on fossil fuels, while bringing only risks and harms to those who live along the pipelines’ paths.

The Dakota Access pipeline would pump about a half-million barrels of oil each day along 1,100 miles through the Dakotas and Iowa to Southern Illinois. There, the oil would be sent to the East Coast refineries and other markets by train, or down another 750 miles to the Gulf Coast through a second pipeline that Energy Transfer Partners is converting to carry oil. Combined, the two pipelines — together called the Bakken Crude Pipeline and acknowledged here in a presentation ETP made to its stockholders in August — follow a similar path to the Keystone XL pipeline that President Obama rejected: 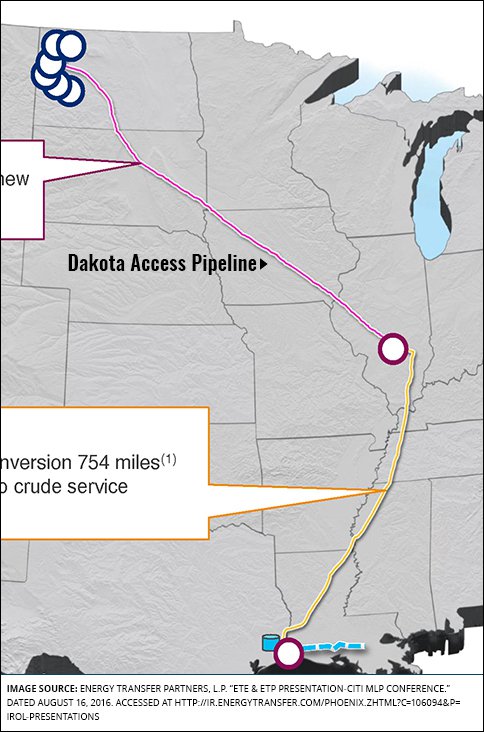 Overall, the Bakken Crude Pipeline will cost about $4.8 billion, and Energy Transfer Partners is touting it as a key element of its future plans to “capitalize on U.S. energy exports.” In building this infrastructure, Energy Transfer and its financial backers are banking on increased fracking in the United States in the coming decades. Over that time, communities will be left to deal with the spills, explosions, water pollution, air pollution, and climate impacts that ensue. 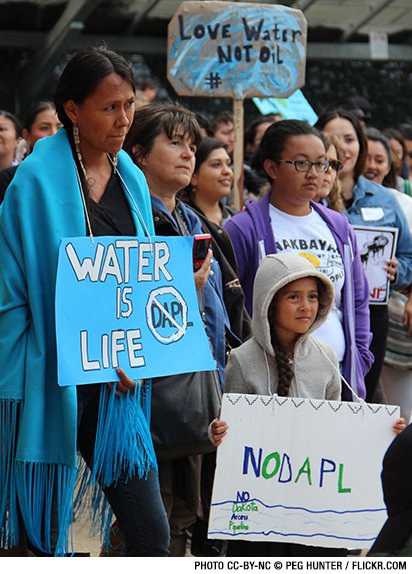 Pipelines are not the answer to our energy needs. We need to keep fossil fuels in the ground, and we need an urgent shift to 100% renewable energy.  The Dakota Access Bakken Pipeline is a direct threat to our air, water, and clean energy future. This is why we need President Obama to support the Standing Rock Sioux and other activists, and use his authority to revoke the federal permits and deny the Bakken pipeline. Urge President Obama to deny the Bakken pipeline.