White House Leakers Identified, Trump Will Fire When He Returns, Headed To Prison

White House Leakers Identified, Trump Will Fire When He Returns, Headed To Prison 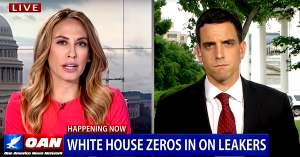 It’s finally catching up with the leakers on the left and once they’re facing prison time, their desire to cover for the corruption and criminal acts of their political masters may not be enough to keep their tongues from wagging and their gums flapping.

OAN has announced that multiple White House staffers will be fired for leaking classified information when President Trump returns from his overseas trip. Not only will they be fired, but they will be criminally prosecuted.

Trey Yingst reported being told by a source at the White House that “three people have been identified as leaking classified information.” Yingst quoted one of his sources as saying, “This is criminal and that people could go to jail.” Of particularly concern, says Yingst, was a leak last week having to do with intelligence information about terrorist organizations in the Middle East, specifically in Raqqa, Syria, developing laptop bombs that could be used on commercial airliners. The leakers not only damaged national security but the information was gleefully used by the dishonest mainstream media as a means of attacking President Trump for comments he allegedly made about James Comey and for “not being trustworthy” with sensitive information because he had shared it with Russia.

He points out that it is something that “could ultimately target the United States and was leaked to the media, it was leaked from a classified format, and that is one of the many leaks that has come out of this White House in the past few weeks that has been a major concern to President Trump.”

Yingst says the particular day for the firing of the leakers is not known, that the Office of Government Ethics has received information from the White House about these three staffers.” There is then “a process that the Government Ethics Office will have to follow, it will then come back to the White House and then the President will be able to make that final decision to fire those staffers.”

Last week we reported on evidence uncovered by the solid investigators at Gotnews that Dina Habib Powell, current Deputy National Security Advisor for Strategy and friend of Valerie Jarrett, Huma Abedin, Ivanka Trump and Hillary Clinton was under suspicion. They stated that current National Security Adviser, HR McMaster had also been implicated in their discovery.

Thank you for reading and sharing my work –  Please look for me, Rick Wells at https://www.facebook.com/RickRWells/, https://gab.ai/RickRWells, https://plus.google.com/u/0/+RickwellsUs and on my website http://RickWells.US  – Please SUBSCRIBE in the right sidebar at RickWells.US – not dot com, and also follow me on Twitter @RickRWells.

1 Comment to “ White House Leakers Identified, Trump Will Fire When He Returns, Headed To Prison”