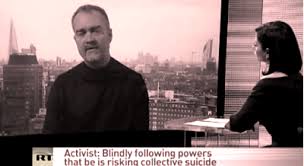 I believe the world is what we make of it and that we have as a human duty the obligation of working to hand this world over to our children in a better state to that which we inherited it.

I do not fear death because life is energy; there is no energy without life nor life without energy. Energy cannot be produced nor extinguished, energy can only transfer; if there is anything to fear in life it is the negative transfer of our energy which is the unavoidable result of living without conscience.

It’s time to arrest all the traitors in the White House and Congress and END THE FED! Ken O’Keefe says that this interview was his best ever. Ken explains the concept of ‘The Greater Israel Project’ and the balkanization of surrounding countries as a means of destabilizing them. Balkanization is a geopolitical term that was originally used to describe the process of the fragmentation or division of a region or state into smaller regions or states that are often hostile or non-cooperative with one another. The head of the snake, the system of power, is headed by the financial system. The bankers rule the Earth through the private control of the issuance of money, debt-based money which we’re all supposed to pay with things like austerity measures, which allows them to provide THEMSELVES an INFINITE supply of money which means that they can buy anything and anyone so we see that the world governments are nothing but puppets of bankers who control their money supply. The bankers at the top of this pyramid are psychopaths.

Do you realize that President Obama was a Constitutional Attorney before becoming president and is psychopathic enough to deliberately execute United States Citizens without trial?! This man is a DICTATOR!