When the Dollar Dies… 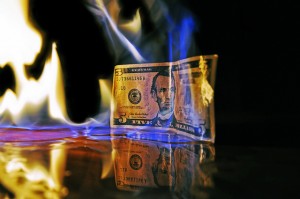 When the Dollar Dies…

How close are we to the collapse of the dollar and complete debt forgiveness?

In the meanwhile, China is buying up the world’s gold reserve as they are vying to become the international currency for trade, replacing the fiat dollar which is backed by nothing and is essentially a worthless piece of paper.

In the following video, Jim Self explains how the collapse of the dollar is inevitable. China is in the process of creating a new currency back by gold as they continue buying the world’s gold reserves.

It is important to understand that the death of the dollar is inevitable and it NEEDS to die in order for an asset backed currency to replace it.  When this happens, there will likely be a complete forgiveness of all debt when the currency resets.

In a recent article on goldseek.com, the following statement was made:

According to Kate of Gaia, the Federal Reserve officially lost their charter on December 23, 2013 and because of that, ALL currency has been deemed completely worthless. Kate stated, “Every fiat currency on this planet is effectively worthless.”

Greed and corruption in the name of profit has led to the poisoning of our water, air and food supplies. In a world that does not rely on economic slavery, it is unlikely that any of these systems would be contaminated in the name of eugenics.

As many of us know, the prices of gold and silver have been artificially manipulated by the Federal Reserve, who continues to pump worthless fiat currency into the stock market to create a false sense of security to various shareholders.

In essence, the dollar is already dead.  It officially died when the United States went off the gold and silver standard.  When a currency has no backing by silver, gold or any other precious asset, it is only worth the perceived value that is printed on it.  For example, it costs about as much to print a $1 bill as it does to print a $100 bill.  Why does one piece of paper have so much more perceived value when it’s not backed by silver or gold?

According to some estimates, only 8% of the world’s currency is actual cash.  The rest is composed of electronic funds.  If you were to take out a housing loan, there is no actual exchange of cash as numbers are simply generated through a computer, including the fictitious interest rate you are charged.  We have been assimilated into a society where we use debit cards for everything from purchasing gas to paying all of our bills.

The “official” announcement of the death of the dollar is fast approaching, yet those who live in the United States will be the last to know as the corporate elite will try to maintain this facade for as long as possible.  We have already seen a number of countries switch from the US Petro Dollar to other gold backed currencies as the US dollar is gasping its last breath.

Those who have been saving physical gold and silver will likely see an extraordinary return on their investments as silver is expected to rise to $700 or more per ounce while gold could eclipse $30,000 per ounce.

While complete debt forgiveness would be beneficial for many people, it would still mean that we will continue living as economic slaves as long as money exists.

Jacque Fresco’s Venus Project shows us how we can all live in abundance without the need for money.

In the video below, Michael Tellinger shows how the Ubuntu community can exist where all community members only need to work 3 hours per week while spending the rest of their time on whatever they would like to persue.

As you can see, there are alternatives to the current economic slavery paradigm that exists, but in order for these to come to fruition, the dollar needs to die.

Those who rely on materialism and economic status will take it the hardest as their paradigm is rocked, but for those who have been living in poverty or barely surviving as middle class citizens, this will be a blessing.

In time, we will transition into a society that no longer needs money or economic subservience.  Think of it this way:  If a UFO were to land in your driveway, there are 2 things the extraterrestrial would not have: A bible and money.  Why?  Because they have moved beyond the need for either as they progressed into Type 1 civilizations and beyond.

For many unawakened people, this will be a “shocker” but for those who have been paying close attention, the New Earth will begin in a relatively short period of time.

In the end, we will look back at these days of economic slavery and will laugh at how ridiculous we were to fall for such a ploy.  Our great grandchildren will ask, “Why did you need money?”

In the meanwhile, the road might get a little bumpy but in the end, everyone wins… except the banksters.

This article is offered under Creative Commons license. It’s okay to republish it anywhere as long as attribution bio is included and all links remain intact.