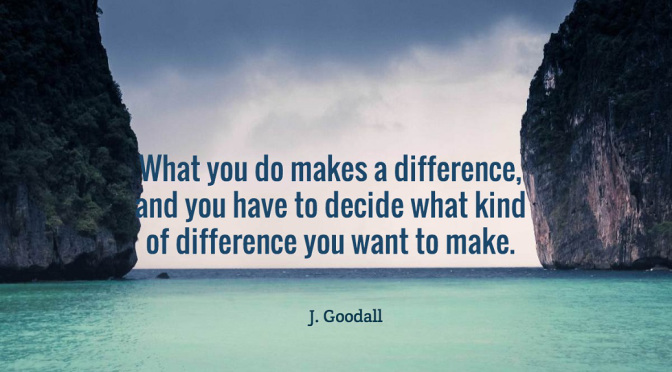 2016 was chaotic, and we now have a new year to look forward to that will, depending on our choices, either build on the madness or offer a path out of it.

We can’t deny that 2016 was a divisive and emotionally charged year. Almost everything, from celebrity deaths to an outrageous election with an unexpected result, has put people on edge indefinitely.

I can’t predict what will happen in the world in the year ahead, but I can recommend preparing for enormous personal changes. Whether they’re good or bad is up to you.

You don’t have to give in to the perils of 2016 or the potential perils the year ahead will bring. Instead, you can shape your reality and decide your destiny. The perils might be unavoidable, but they don’t have to defeat you.

Utilizing your power to create reality will not only help you create less perils, but ensure you can handle the ones that come your way. As cliché as this will sound, you just have to realize you create your reality and be open to the power of love. More on that later.

What Will You Create?

What will you create in 2017? What are your goals? For most of you, your goal will undoubtedly be to leave behind the destructive patterns established in 2016. This wasn’t a bad or chaotic year for everyone, but on a global level, most people (including spiritual seekers) were knocked down a little.

I like to think of 2016 as a trial run for what’s to come. You can interpret this as a positive or negative thing depending on your choices this upcoming year.

I know pretty much every spiritual article about the new year states the previous one was a “trial run”, and admittedly, I’ve thought the same thing for the past few years. But it’s never seemed more obvious than it did this year. It’s as if we all live in a giant snow globe and someone shook it violently to see what would happen.

The beautiful thing is that out of this destruction will come cosmic order and an understanding of universal love. We need only be patient and considerate in our thoughts, words, and actions to witness it unfold slowly.

Chaos Is Part of the Process

Chaos is an inevitable part of the process, because collectively, we have a lot of pent-up energy we need to let out instead of grasping desperately it as if it’s our lifeblood. If we don’t let it go on our own, events in life will ensure we do.

For example: a great deal of pent-up rage over the political system surfaced this year because of the election. The result, Trump’s election, made it clear that people are fed up with the system and willing to take any alternative to the establishment figureheads.

Along the way, people on all political sides expressed that pent-up rage clearly and openly. In expressing it, we let some of it go. This doesn’t mean, however, that we have no rage left for the establishment. To the contrary; it’ll grow, purifying the defunct political system by inspiring people to act. It’s a justifiable rage that burns and purges what no longer works in the world.

As you can guess, the same purge will take place on a personal level. Thus, even more pent-up energy will leave the collective and free us to be open to love.

I’d like to say 2017 will be all flowers, sunshine, and personal/social growth, but the fact is we decide what will happen and how it’ll happen.It can be our best or worst year ever.

We’ll release our pent-up energy either way, but we’ll decide if it happens in a positive or negative way. Not to mention that, as always, adversity will be here regardless. Just try to remember it’s here to help and do your best to get through it.

Being open to adversity will help you leave behind the negativity associated with it, but resisting it will increase the chaos and discomfort brought to the surface this year. We can leave behind the chaos for good, but it’ll remain and grow if we don’t take the chance.

What Will You Create?

If I’m completely honest with myself, I have yet to be devoted enough to this work to ensure real success. I have yet to write consistently enough or generally show the conviction needed to succeed. This is one of many things I plan to work on in the upcoming year, and in some ways, it’s already getting easier.

My other goals are somewhat generic but meaningful for me. I prefer not to call them new year’s resolutions, because those are often a hollow result of the celebration of New Year’s and don’t tend to stick.

For me, these are long-term goals that will have an impact far beyond 2017. They include being here for my family, being more dedicated to music, nature, and writing, and becoming the authentic, creative, active, heart-centered individual I intend to be.

2016 may have been a trial run, but the new year will build on the positive things we’ve learned and hopefully encourage us to transcend the negative.

2017 will be the next step from what we’ve created so far. I have nothing to offer in the way of potential celebrity deaths or other (somewhat) trivial matters in the new year, but I can say that the goodness or lack thereof we established and built upon this year will be taken to the next level in the year ahead.

If you’ve learned and begun to follow the teachings of love, your love will grow. If you’ve taken the path of hate and divisiveness many chose this year, those qualities will grow. You guide the process every step of the way, knowingly or unknowingly.

The potential for love to explode in all directions is high this upcoming year, but the same can be said for hate. It all comes down to the path we follow and the devotion we do or don’t give it.

Experience has shown me that the only way to ensure you take a positive path is to stick with the path of love. I’m not trying to preach love as some religious movement, because despite that so many people use the popular phrase, “love is my religion”, the spiritual path of love is not a religion. Like Buddhism, it’s more of a daily practice anyone of any faith can embrace.

It doesn’t matter if you’re Christian, Catholic, Jewish, or even atheist; you can walk the path of love. Love doesn’t have to be spiritual. It can boil down to having compassion and treating the world the way you want to be treated.

With this said, love isn’t really something you can preach. I’ve learned, however, that sticking with it can change your life.

I don’t want to divulge too much information on the path of love since our next segment this week is all about it. In regards to the coming year, I can only repeat love is the sole way to ensure we take a positive, nourishing path.

The Madness Will Remain

We can’t control what others do, but we can control how we behave as well as our responses to the world’s madness. As 2016 showed us, the madness will grow and fester deep in the collective unconscious until we finally get it out.

Rather than ensuring you’re no longer angry over politics, the government, or the corporate ravaging of the environment, the path of love will ensure you can express your anger in a wholesome, authentic, and effective way. Your anger will inspire you to fight for positive change rather than fight out of anger or for the sake of fighting.

That angry pent-up energy can be used properly if given the space it needs to express itself. Instead of holding on to it until it erupts uncontrollably, you can channel it into the struggle for change.

This is one of many big secrets humanity is missing: rather than being a hindrance on the spiritual path or the path of love, anger is a natural emotion we’re meant to feel, express, and use to encourage change in your life or in the world.

The problem is not that we get angry, but that we become bitter and hateful. 2016 made this clearer than any other year in recent history. People seemed to be more hateful this year, which made it difficult to have a real, beneficial global conversation.

You Control the Outcome

The world is far from embracing the path of love, but this doesn’t mean we can’t embrace it individually. This is the only way to ensure it catches on, and although it’s easier said than done, the rewards will far outweigh the struggle.

I believe humanity can embrace the path of love and make the changes we need, but we’ll need more chaos and upheaval first. This seems like the only thing capable of waking people from their self-imposed slumber, and the first step to helping others wake up is to wake up yourself.

The year ahead offers the potential for a radical transformation, whether good or bad. Since you control the outcome, you can ensure the transformation is in line with your ideals and goals.

It will surpass your wildest expectations no matter how you approach or attempt to control it, and ultimately, you can only let go and let life do what it will this year.

I wrote the following for the 230th issue of the Weekly Awareness Guide, a written document distributed weekly via email that I offer for $11.11 a month.

Income from the guide helps me get by and ensures I can continue to offer free content, and every subscription is appreciated. The option to subscribe is given at the bottom of this post (learn about subscribing with cash/check here).

This article appeared first at Culture of Awareness and appears here courtesy of Wes Annac.

I’m a twenty-something writer & blogger with an interest in spirituality, revolution, music and the transformative creative force known as love. I run The Culture of Awareness, a daily news blog dedicated to raising social and spiritual awareness and supporting the evolution of the planet.

I also have a personal blog, Openhearted Rebel, in which I share writings related to spiritual philosophy, creativity, heart consciousness and revolution (among other topics).

I write from the heart and try to share informative and enlightening reading material with the rest of the conscious community. When I’m not writing or exploring nature, I’m usually making music.

If you enjoyed this post and want to support my work, consider a donation (no PayPal account required).