What Is Vault 7 on WikiLeaks?

What Is Vault 7 on WikiLeaks?

By Stephanie Dube Dwilson, published on Heavy, on February 7, 2017 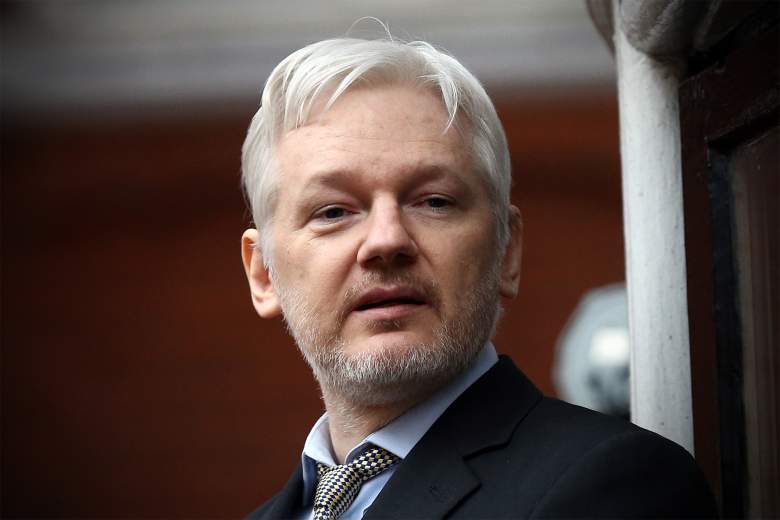 WikiLeaks Twitter followers are wondering about the meaning behind mysterious #Vault7 tweets. (Getty)

WikiLeaks is known for its cryptic messages, but the latest #Vault7 tweets may be among the most mysterious. WikiLeaks’ Twitter account just recently started tweeting #Vault7 messages with cryptic photos, and no one is quite sure what WikiLeaks is hinting about. The tweets are sparking all sorts of theories ranging from post-apocalyptic in nature to theories that are more conspiracy-laden. We’ve gathered the photos and tweets and are sharing the latest theories and analysis. Once you’re done reading this article, take our poll at the end of the story and let us know which theory you think is most likely true.

Here’s what you need to know. 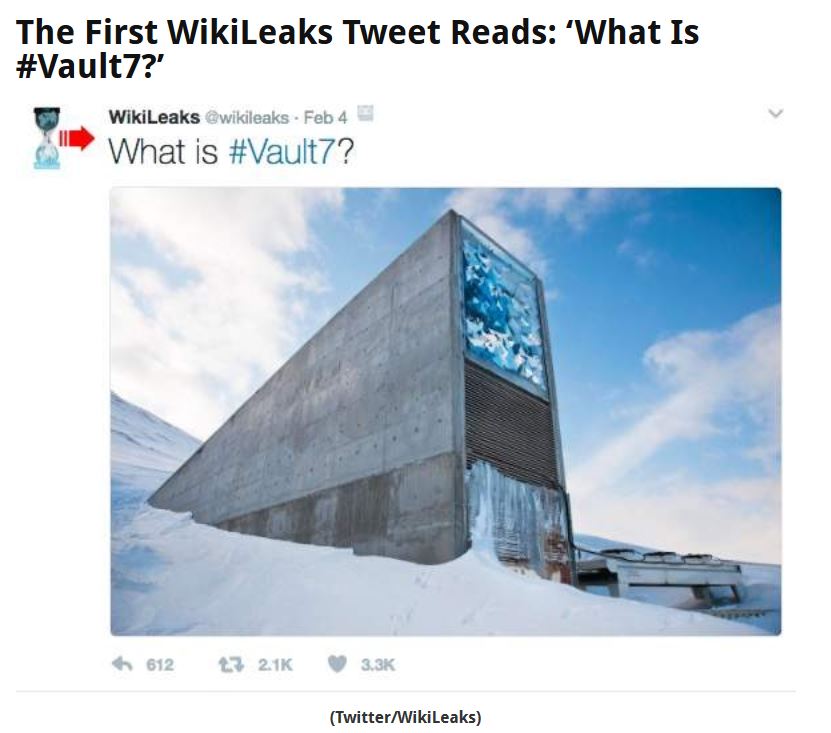 Starting February 4 and ending early Monday morning, WikiLeaks shared a series of strange tweets about #Vault7. The first is pictured above.

The tweet features a photo of the Svalbard Seed Vault. You can watch a video about it below:

The seed vault is on the Norwegian island of Spitsbergen in a remote Arctic archipelago. The vault was started by Cary Fowler and the Consultative Group on International Agriculture Research to preserve plant seeds and make sure there are always spare copies of seeds around the world, in case of a global or regional crisis. The facility’s managed by the Nordic Genetic Resource Center, but there are no permanent staff at the facility. The permafrost and lack of tectonic activity make this a good location for a seed vault.

What you see above the entrance to the vault, in the photo, is an illuminated public artwork. It was made by Dyveke Sanne and is called “Perpetual Repercussion.” Interestingly, Norwary requires that government-funded works that exceed a certain amount must include artwork. 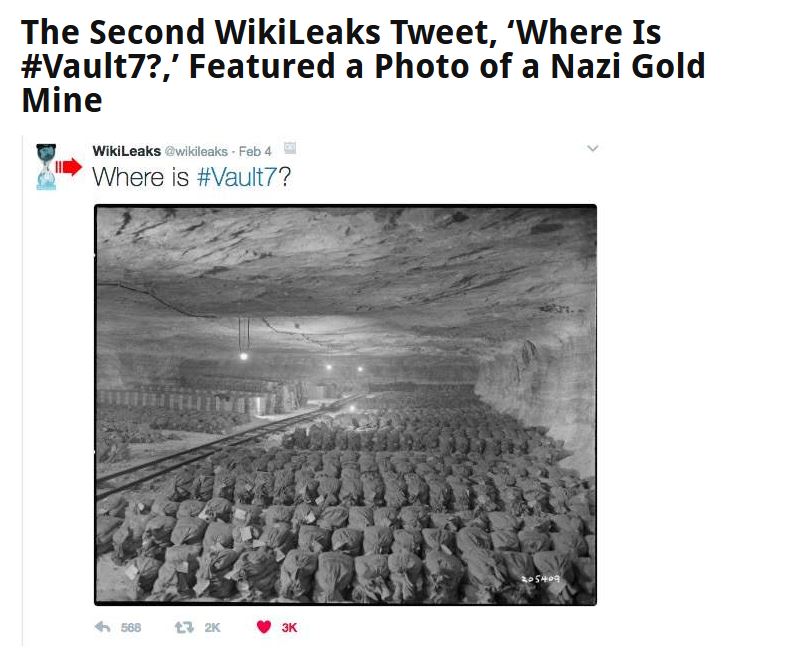 The second tweet is pictured above. It asked “Where is #Vault7?” The photo in the tweet shows Nazi gold stored in Merkers Salt Mine (it’s referenced in this Wikipedia article.) The gold at Merkers was discovered when the U.S. Army took Merkers in 1945 during World War II. Two French women had reported that the Kaiseroda salt mine had gold stored by Germans, which was how the U.S. Army first discovered it. According to the National Archives, the mine contained gold bullion, gold Reichsmarks, British gold pounds, French gold francs, American gold pieces, gold and silver coins, additional foreign currency, silver bars, platinum bars, artwork, and more.

Nazi gold was allegedly transferred by Nazi Germany to overseas banks during World War II, as part of a strategy involving looting victims’ assets to fund the war. Authors and conspiracy theorists have long guessed about what happened to the Nazi gold that disappeared. In fact, a group of Holocaust survivors even brought a civil suit against the Vatican Bank over it, filed in November 1999. The case was dismissed in 2003, but then reinstated in part in 2005. Various parts of the case were dismissed again in 2007-2009. The Nazi gold has been the subject of conspiracy theories for a long time. 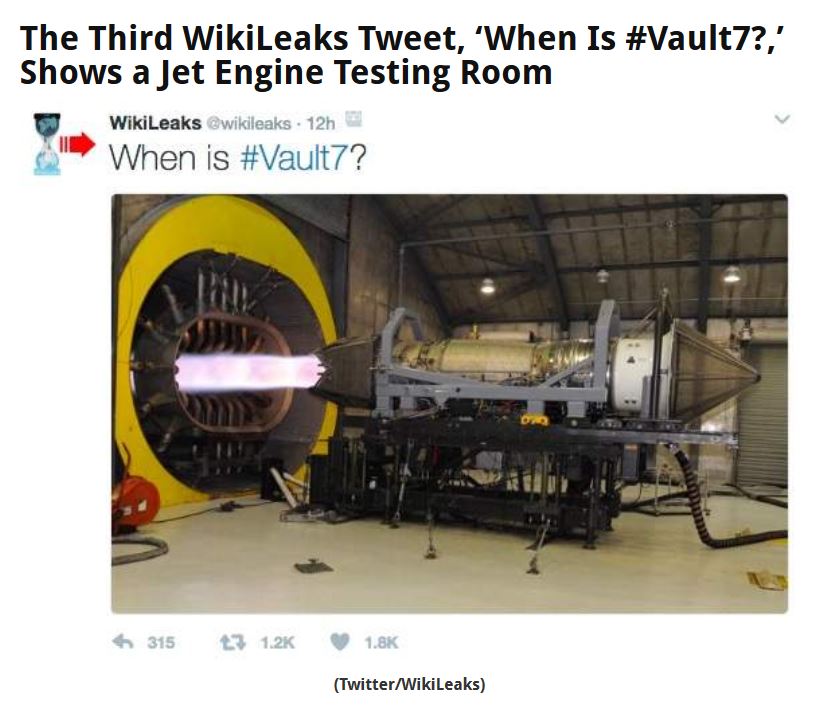 The final tweet in the series, as of the time of publication, asked “When Is #Vault7?” The photo in the tweet was from 2010, taken at Langley Air Force Base in Virginia, while running a test on a Pratt and Whitney F119-PW-100 jet engine. The jet inspections look for any objects that could damage blades inside the engines. The article that the picture is from talks about soundproof hush houses that are used for jet engine testing. These are sometimes called “vaults.” 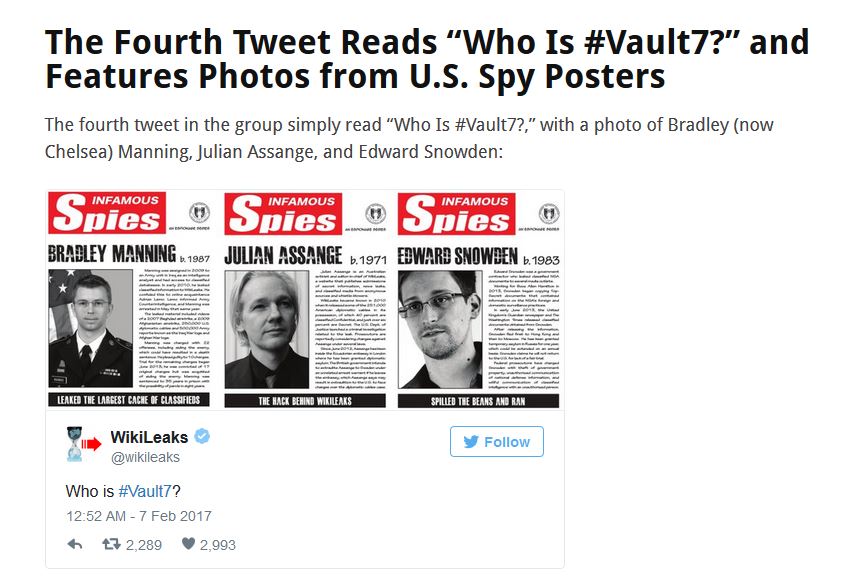 In case you’re wondering where these photos came from, they are part of a series of spy posters created by the U.S. government. Each poster contains a head shot, year of birth, bio, and a paragraph about their alleged crimes as part of an Espionage Series. You can see all of the posters in the series at the Center for Development of Security Excellence’s website. Beneath Snowden’s photo the poster reads: “Spilled the Beans and Ran.” Beneath Assange’s it reads: “The Hack Behind WikiLeaks.” Beneath Manning’s it reads: “Leaked the Largest Cache of Classifieds.” 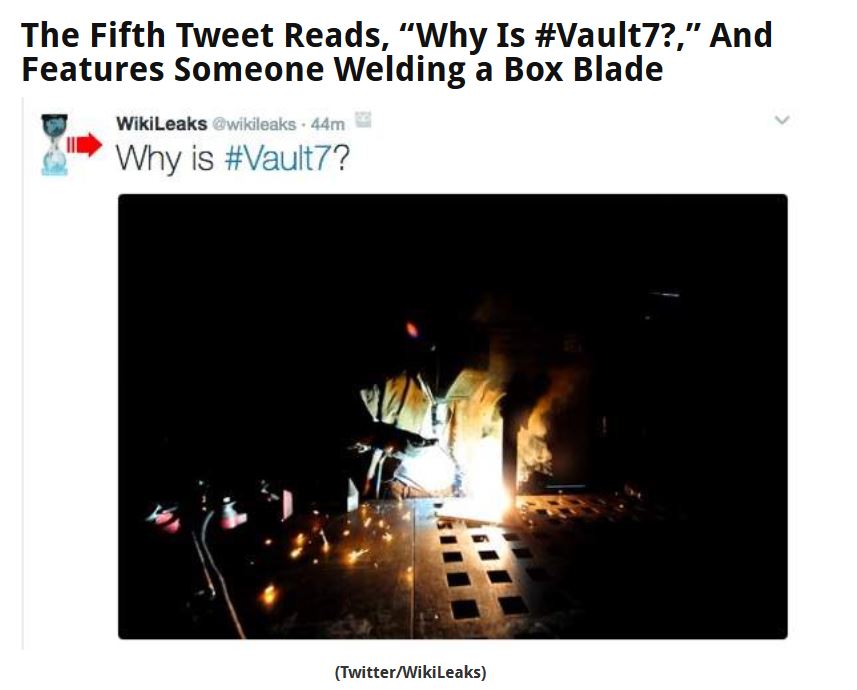 The fifth tweet, released on February 8, read: “Why is #Vault7?” The image appears to be of someone welding something. A reverse image search reveals this to be from an article posted by Whiteman Air Force Base. The caption of the photo reads: “Staff Sgt. Adam Boyd, 509th Civil Engineer Squadron structural supervisor, welds a box blade for a snow plow, Feb. 27. Structures Airmen perform jobs such as this one to save the Air Force from having to possibly spend money on parts made by civilian companies.” This photo will likely feed more theories that these tweets are about 9/11. However, the article also talks about vault doors (albeit briefly) and about how the government spends its money. Interestingly, this is the second photo in the series that isn’t explicitly of a vault. 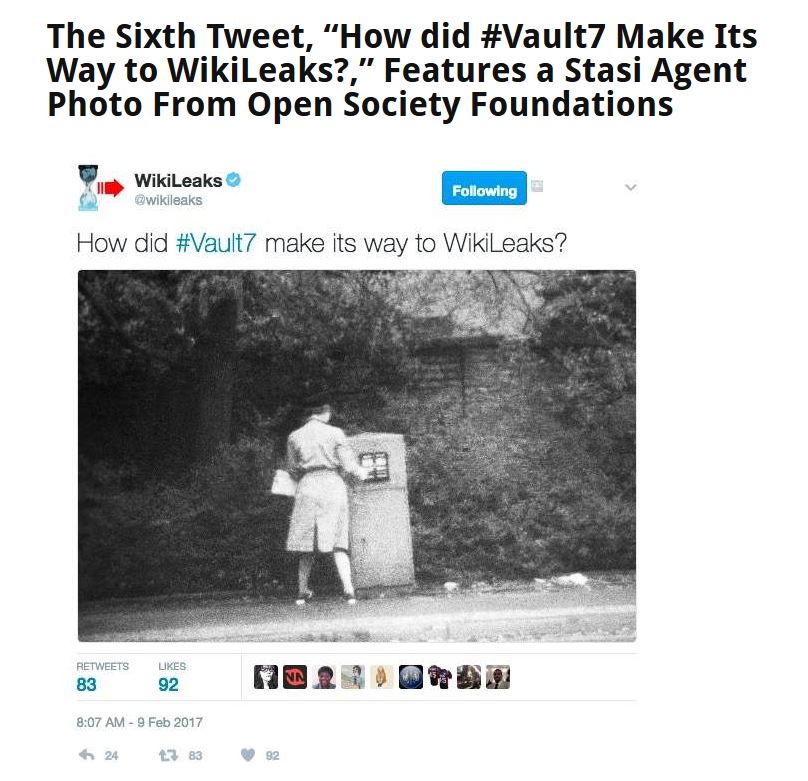 The sixth tweet, released early on Thursday morning, February 9, reads: “How did #Vault7 Make Its Way to WikiLeaks?” This photo can be found in several locations, including Open Society Foundations’ “Images from the Secret Stasi Archives” here. The caption reads: “When mailboxes were being observed by Stasi agents, every person posting a letter was photographed. Some films found in the Stasi archives also show persons dressed in civilian clothing emptying the mailbox after the conclusion of the surveillance action.” It’s part of a series of photos of people at mailboxes. Stasi is The Ministry for State Security, which was the official state security service of the German Democratic Republic (East Germany.) Wikipedia cites several sources as saying Stasi was often referred to as one of the most effective and repressive intelligence and secret police agencies to have existed.

As an interesting note, George Soros is the founder and chairman of Open Society Foundations, the source of this photo. 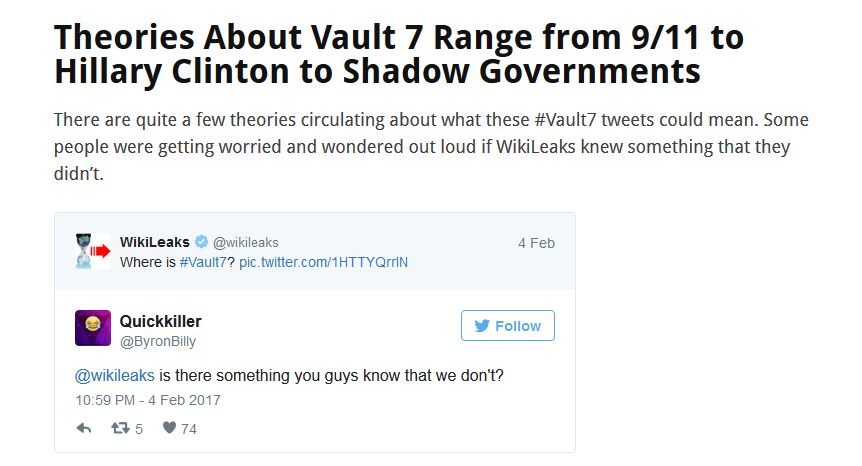 Here are some of the theories:

One theory points out that the FBI recently released part 6 of 6 from Hillary Clinton’s email investigation. This theory proposes that the tweets are a reference to deleted emails that the FBI will never be able to release. The FBI’s Vault releases on Clinton can be viewed here. These deleted emails would have, theoretically, been released as Vault 7. Others believe WikiLeaks is hinting about a new Clinton email batch that they plan to release themselves.

Others are holding to a theory that these tweets are about an upcoming 9/11 leak. In the third tweet, the engine was an F119, and these theorists point out that 119 backwards is 911. They also reference Building 7, which has been the source of many 9/11 conspiracy theories, including a conspiracy theory that there was a “vault of gold” beneath the building. (This conspiracy theory is often incorrectly ascribed to Building 7, but it’s actually about Building 6.) It seems like a bit of a stretch, since WikiLeaks has not made any indications of an upcoming 9/11 leak. A more likely explanation is that the photo was chosen because jet engine was being tested in a room sometimes called a “vault.”

The fifth tweet features a photo of someone welding, which some believe is a reference to a conspiracy theory about an angled cut on a World Trade Center beam. The “box blade” he’s welding, some say, might also be a reference to box cutters used on 9/11.

A new theory, derived from the fifth tweet, is that WikLeaks is going to release something related to government spending or military projects. The fifth tweet referenced a photo from Whiteman Air Force Base, which talked about government spending. In addition, the host unit for the base is the 509th Bomb Wing, which operates the B-2 Spirit Stealth Bomber. Whiteman is the only permanent base for the B-2. B-2 bombers were used in October 2001 in Afghanistan.

More Theories About the Number 7

Others are taking this even farther and finding any connection they can to the number seven. In several WikiLeaks Reddit discussions, some have said that it might be a reference to the next mass extinction event following the sixth, which some scientists say we are already in the middle of. This theory is connected to the first tweet, which showed the seed vault, and proposes that #Vault7 has something to do with climate change.

Then there’s the “shadow government” theory connected to the number seven. CNBC reported in October that a new FBI release featured claims of a “shadow government” composed of high-ranking state officials, whom some referred to as “The 7th Floor Group.” There’s also a theory that this could be somehow connected to George Soros, as the last tweet in the series featured a photo from Open Society Foundations, which he founded.

References to a Vault 7

Here are some other past references to Vault 7, not connected to WikiLeaks:

Now It Is Unclear What Tweets Will Be Next

It remains to be seen which of these theories about Vault 7 — if any — will end up being correct. There’s also a chance that the pictures might not provide any clues at all, and WikiLeaks might simply be showing pictures of well-known vaults to go with its tweets about #Vault7, along with other photos related to each subject. WikiLeaks was referencing the 5 W’s (& one H) of journalism (Who, What, Where, When, Why & How). As Heavy predicted, one from each series was ultimately tweeted. Does that mean a file release is next?