What If: The Tattered Ball of Twine 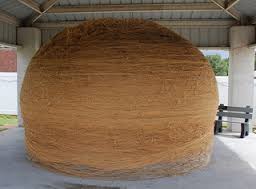 What If: The Tattered Ball of Twine

I originally released this article in February 2013.  A wonderful friend brought it to my attention a few days ago and after re-reading it a year later, I felt the need to repost it.  Today this article has far more meaning as a year later our own understanding of “what’s happening” has been greatly expanded.

All over the world there are so many frustrated and angry people and groups.  They’ve been waiting for “something”,  been promised “something”, and yet those “somethings” haven’t happened.

…. they have all been left waiting.

Nick and I had a conversation two nights ago on this topic and I will share my thoughts on it as I think they might help some of these groups join the dots and bring perhaps a bit of understanding to the interconnectedness of all of these topics.

“INTERCONNECTED”  – This is a vitally important aspect to understand in looking at all of the above situations and frustrations.  They are ALL interconnected and directly linked.

The main reason that not one of these things has been announced or openly discussed is because to admit to even one small aspect, is to open Pandora’s Box and have ALL of “their” dirty laundry dumped out.  Because it is all linked together.

The situation in the world of “governments” and “finance” and even “science” globally is basically one huge FUBAR mess.   “They” know it.  “They” know that there is nothing they can do about it.  But that doesn’t stop them from desperately trying anything possible to continue the charade.   “They” are hoping for a miracle…..  so far they’ve gotten a big fat zero.

Each and everyone of these things is also linked to the next one in line, forming and endless spiral of deceit and lies, showing just how desperate they have been to hide EVERYTHING from the people of this planet.

It isn’t that “they” are stubbornly refusing to move forward.  At this point they are DESPERATE to move forward!!!   It is that they cannot figure out HOW to move forward with their charade of change without the entire ruse becoming glaringly SEEN.  Every plan they have devised to try to keep the game going and to keep them in control has completely failed.  Every desperate attempt they have made to try to “fix” it, or to mask it, or to bluff their way through it…. has failed.  They KNOW that they cannot keep it all hidden anymore…. and they are terrified.

“THEY” are ALL terrified.  Not just the Cabal, but their controllers as well.   As I said: each and every aspect of these things, that they are trying so desperately to hide, are all tied together in one HUGE ball of mess- every piece is knotted to all the other pieces, and if they allow even one frayed string in the gnarled, convoluted and twisted ball of twine to be pulled loose, then ALL the tangles that have been snarled and braided together instantly fall apart, becoming completely transparent for everyone to see.

And once it is all made clear….. then all they are left with is tattered pieces of string in a pile on at their feet.

There was a new financial system
…… that left the same banks in charge of your money?

There was total debt forgiveness- both national and personal
…… but you still had to pay rent, buy food & gas & necessities and to pay bills?

There were Prosperity Packages for those who signed up for them
….. but only for those that knew about it in advance?

There was a new government
….. but it was made up of the same ol’ politicians?

There was free health care
….. by the same doctors we have now pushing the same drugs that already exist?

There was new Laws
….. enforced by the same thugs/authorities we have now?

There was a global revaluation of currencies
….. but you don’t own any foreign currencies?

Those checks they sent you, paying you back all the illegal income taxes you’ve had stolen from you for your entire life is a payoff to keep you fat and indolent,  happily counting your shiny pennies for a few years?

Their new era of prosperity and freedom still included passports to travel in and out of your country, drivers licences and insurance to own a vehicle, government registration of who you are, and continued to force you to prove that you are not a criminal?

Everything they told you was new and wonderful, was actually the same old thing with a fresh coat of paint?

What if the universe had suddenly changed, releasing your mind from the confines of it’s prison and allowing you to know WHO you are?

What if the YOU that they convinced you was you, was really a construct of their system and not the real YOU at all?

What if you looked inside and remembered WHO you are and the TRUTH of who you BE and what it means to DO?

What if THIS is what they are desperately trying to hide from you?