What does it feel like to have coronavirus? [from someone who has had it]

What does it feel like to have coronavirus? [from someone who has had it] 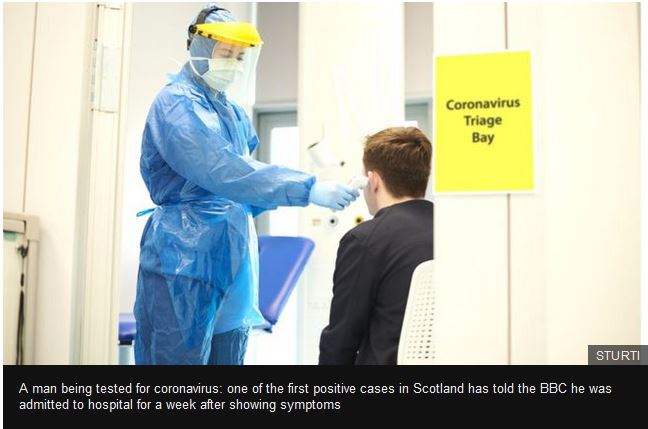 One of the first people in Scotland to contract coronavirus has spoken about his experience of the illness.

The Covid-19 patient told BBC Scotland he wanted to provide reassurance for the majority of people who are expected to make a full recovery.

He was diagnosed with Covid-19 about 10 days ago following a trip to Italy and becoming feverish.

The man, in his 50s, was treated in isolation in a Scottish hospital and has now fully recovered.

He told BBC Radio Scotland’s Drivetime with John Beattie programme he had travelled to watch the Scotland rugby team take on Italy in the Six Nations tournament.

He went between Milan, Pisa, Florence and Lucca, spending four nights in Rome for the rugby match.

The man said: “I returned on 25 February but because the place I had been to was a category two area, when I came back it didn’t have any particular restrictions in place.

“I felt no symptoms. I was completely fine and went to work on the Wednesday and Thursday. Later on the Thursday evening, I started to feel a bit of a flu coming on. I had a mild fever, I felt shivery but the biggest symptom was aches and pains, particularly in my legs.

“I was feverish – that continued through Thursday night and I didn’t sleep too well.”

He followed the NHS 24 guidance and called the 111 number for advice. They instructed him to go to hospital on Friday morning where he was tested with nasal and throat swabs.

He said: “That was returned as a positive test on the Sunday evening (1 March) and I was hospitalised. From that point on I was subject to daily blood tests and throat and nose swabs.”

But from this point on, he said his symptoms did not develop any further.

He added: “By the time I went to hospital, I was feeling fine. The mild flu symptoms quickly dissipated, I had no leg pain, no fever, no cough and no shortness of breath.”

The patient remained in isolation for eight days and was released on Monday after two consecutive nasal swabs came back negative for Covid-19 .

He said: “I felt well. My symptoms seemed to have gone within three or four days. But I fully understood the reason for isolation, given my tests showed I was positive for Covid-19.”

He is back at work now and worked from the hospital throughout his isolation.

The case involved an elderly patient in the Lothian area who had an underlying health condition.

Currently, there are 85 confirmed cases, with 3,314 people tested. 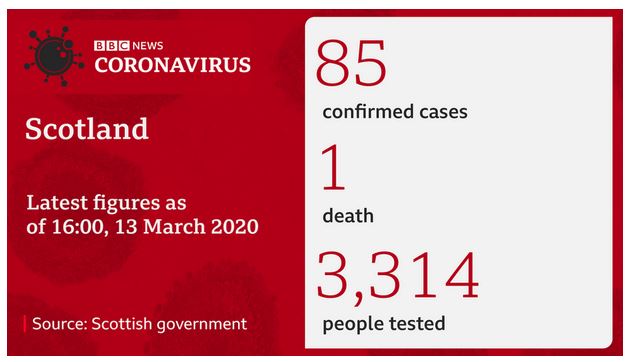 The patient asked to tell his story to the BBC during the virus crisis so that people do not panic over exposure to the disease.

He said that while some the virus might be much more serious, for most people it would be a mild illness.

He said: “I think I am fairly normal. The vast majority of the population will experience what I have experienced.

“It is something that is short-lived and you can recover from it fully. That’s how people should be viewing this.

“For many, it is nothing more than a bad cold, really.”

He urged people to take time to read the advice from public health professionals.

He said: “The information is spot-on but you really do need to take the time to read it and be aware of what it is asking of you.

“I do accept there are a lot of people worried out there but if you start following the advice in relation to self isolation in particular, there is a real chance we can limit the extent of this disease.”