What David Rockefeller would now tell The Donald, if David were being honest

Will Donald Trump keep his promises?

What David Rockefeller would now tell The Donald, if David were being honest.

(To read about Jon’s mega-collection, The Matrix Revealed, click here.) 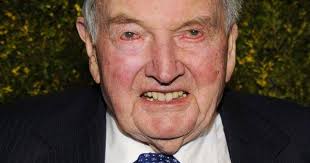 All right. Hillary and Bill are gone. They’re back in their coffins and their supplies of blood are running low. That’s a good thing. That is a major outcome of the election.

But will Donald Trump now keep his promises?

I’ve framed this piece as a letter David Rockefeller, arch-Globalist-in-charge, might write to President-elect Trump. The updated “payoff” is in the last paragraph.

If Rockefeller were being honest, this is what he would write:

I won’t waste time congratulating you. We both know you and America are in for a rough ride. That plucky little demon, George Soros, is already funding and orchestrating thuggish riots in American cities. They do induce a bit of chaos, and I take a certain delight in chaos.

The machinery of Washington DC is ready to chew you up, Donald. There are spies everywhere, and at least a few of them will infiltrate your Presidency at influential levels—if you yourself don’t bring them in because you believe you need them.

I represent and lead an international order, as you know. Our basic plan is to eliminate sovereign nations and erase borders. We must do this, so we can usher in our own global system. We are winning. Surely, you see this.

On the issue of borders and immigration, we want none in the first case and no limit on immigrants in the second case. We want to overwhelm infra-structure and communities with the greatest possible number of people who refuse to assimilate and yet demand special treatment and consideration. We want people who utterly reject America and yet insist on taking whatever they can get from America. Do you really think you or anyone else can stop this wave?

I bring this up, because it represents just one, out of a whole host of strategies, by which we aim to undermine and reduce the country and bring it into our system, absent the precious freedom so many people talk about endlessly.

In other words, Donald, if you are more than a self-serving narcissist who has found a way to stir up the masses in your favor—if you really intend to “restore American values”—you are going to have to give something in order to take something. You’re going to have to make deals. You, of all people, should understand this.

Consider a few items on your long laundry list:

Close the southern border. Cancel NAFTA. Get rid of Obamacare. Induce corporations to close their factories in Third World hell holes and come back home. Lay on tariffs. Outlaw special-interest lobbyists. Reform the tax system. Set term limits on Congress. Take people in inner cities off Welfare by giving them good jobs. Root out terrorists at home and abroad. Refrain from making foreign wars. Somehow fire all federal employees who are useless and just taking up space. End Common Core. Build a wall.

Naturally, all these changes you want to make…I want to stop. Why? Because continued corruption is good for my business, and my business is Control. I want to foster the worst in people, so I can enact the time-honored strategy of imposing A Better Order. I want to prove that humans are badly programmed and need correction.

I want one Planet, without liberty and justice for all.

On the outside chance you are more than just another self-seeking politician who has an instinct for the jugular, you will most certainly see you need to start making deals and compromises.

We knew, from the beginning, there was a chance you would win the election. Hillary Clinton, despite all the favorable press she received from our dupes and pawns, was basically a weak candidate. Aside from mouthing the same empty sentiments over and over, she offered little. We prepared for the possibility of your victory. For us and our agenda, your strongest asset was your innate ability to divide the country—or to be more precise, we could characterize you as a great divider. Doing this, for us, is child’s play. Using the idiot youth and the badly misinformed inner city populations, we could paint you as the worst possible threat to America. We like that tactic because, again, we intend to bring down America into a sewer. We want conflict. Racial conflict, for example, is very good for us. We can play that tattered card again and again. We can roll out some very obnoxious characters, when we need them to stir up trouble.

So here you are, about to move into the White House. We can push a plan to make life miserable for you, or we can do business. It’s up to you.

I’ll quote myself here. This is from my 2003 Memoirs: “Some even believe we are part of a secret cabal working against the best interests of the United States, characterizing my family and me as ‘internationalists’ and of conspiring with others around the world to build a more integrated global political and economic structure—one world, if you will. If that is the charge, I stand guilty, and I am proud of it.”

—I’m just reminding you where I stand, Donald. And why don’t I also quote my intellectual lackey, Mr. Brzezinski, while I’m at it. He wrote this in 1969, and yet people still don’t seem to realize where we’re going: “The nation state as a fundamental unit of man’s organized life has ceased to be the principal creative force: International banks and multinational corporations are acting and planning in terms that are far in advance of the political concepts of the nation-state.”

You see, we speak and write out in the open, and the fools don’t get the message.

Donald, hundreds of thousands of influential press people and academics have sold out to us and our Globalist agenda. They did so long ago. I confess, I despise them. They’re weak cowards of the first order. But we use them, and they constitute, all together, a formidable army. They love the pittance they earn, and they love the small degree of status they’re given. Pathetic fools. But if you try to go up against them, it’s rather like swinging at clouds. What can you achieve? And then they descend on your head and make it rain. It’s amusing.

Have you been reading the editorial pages of the New York Times lately? A contingent of the paper’s little grotesque turtles has been characterizing your election as a disaster for the nation. They pick away at you, they imply the gates of hell await. They’re busy, in their own way, stirring up revolt. NBC News is also predicting doom and encouraging the perception that you are standing on a shore at which minorities can never arrive, and a revolt is necessary. And this is just the beginning, Donald.

In the coming days, I’ll be sending one of my representatives to talk to you. Pay attention to what he says. He’ll have specific “gives and takes” for you to ponder. All your life, you’ve done business. At times, you’ve dealt from what you thought was the bottom of the deck. You have no idea how far down that bottom actually goes. You’re in the major leagues now.

In case you’re wondering, we’ve contacted and worked with every President for decades. Many decades. Things operate best that way.

Meanwhile, watch your back, as they say. I’d hate to have to work with that dim bulb vice-president of yours. You’re a lively fellow. I think we would enjoy each other’s company.

PS—A note on mind control, a subject with which you may not be familiar. Or should I call it mind chaos? Our people exercise a great of control over the medical system, including the psychiatric arena. They specialize in diagnosing and treating non-existent mental disorders with highly toxic drugs. In the process, they consign millions of people to an existence of confusion, despair, and debilitation. We are rotting out the country from the inside. Our other medical drugs are just as harmful. And then there are the vaccines and the gross neurological damage they cause. We cover the waterfront, Donald. Will somebody go up against us? Are you that person? If so, my advice is: go all in. Risk your life. Or: let’s make a deal. It’s the smarter business move.

PPS—Update: It appears you’re opting for “the gracious Trump” rather than “the attack-dog Trump.” I take this as a good sign. You’re getting the message. If I’m reading you correctly, you’re going to leave the Clintons alone and let them fade into the twilight. You’re going to appoint Washington insiders to important posts. You’re going to revise Obamacare and still give Big Pharma (that’s me) pretty much everything they want. You’re going to go soft on deporting illegals. You’re not going to build a wall. You’ll induce a few corporations to come back home from foreign lands, but on the whole the Globalist framework (that’s me) will remain intact. As President, you’re going to back off your vicious attacks against major media (that’s also me). Am I correct in these predictions? If so, you’re going to need some very competent propagandists to run interference for you, because the millions of people who voted for you will rise up in outrage. I can help you out there. I have some of the best minds of this generation on my payroll. As Barack Obama famously said, “We’re all in this together.” Well, not all of us. Just the ones who count. Do you want to count, Donald? Or…do you want to be a hero? It’s an interesting quandary. Wouldn’t you agree?