by Daisy Luther, published on The Organic Prepper, on January 3, 2017 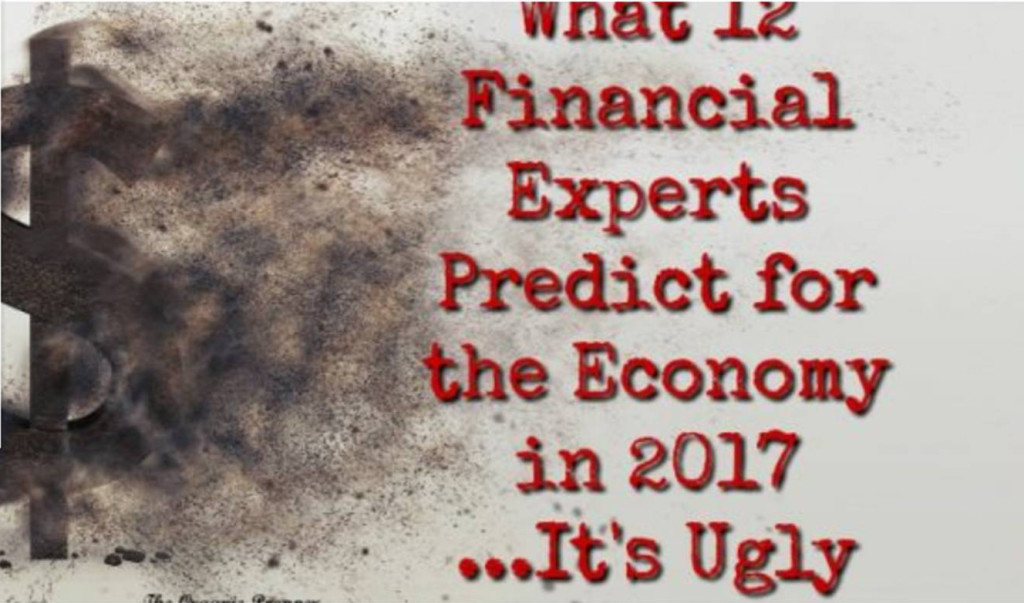 What lies ahead for the economy this year? Will the economy finally collapse as predicted by many or will the early positive signs in stock markets around the world continue and the global economy will flourish? I’ve taken a lot of heat for being “gloomy” and for “fear-mongering” lately when I’ve said that President-Elect Trump is inheriting a mess of epic proportions and that we may still be in for a rough financial ride. While I do think that Trump is a far better choice than Hillary Clinton ever could have been, when a situation has been declining as long as ours has, it would take an absolute miracle to turn it around without some pain. And it turns out, I’m not alone in my concern about the worst for our economic situation during the upcoming year.

Lawrence Yun is the chief economist at The National Association of Realtors® (NAR).

“The budget of many prospective buyers last month was dealt an abrupt hit by the quick ascension of rates immediately after the election. Already faced with climbing home prices and minimal listings in the affordable price range, fewer home shoppers in most of the country were successfully able to sign a contract.” (source)

Gerald Celente is a trends forecaster who has a long history of accuracy. You can find his work at TrendsResearch.com. He predicts:

“We’re forecasting the economy is not going to rebound with the economic proposals that are in place now. . . . The global situation has created an environment for financial panic. The financial panic conditions have been in place for quite a while. What Trump’s victory has done is played it off for a little bit possibly, but on the negative side, you still have the debt and interest rates going up and the debt that has to be paid. On gold, we believe right now is near its bottom.” (source)

James Dale Davidson. He’s the economist who correctly predicted the collapse of 1999 and 2007.

“There are three key economic indicators screaming SELL. They don’t imply that a 50% collapse is looming – it’s already at our doorstep.” (source)

Marc Faber is an investment advisor and fund manager. He is the publisher of the Gloom Boom & Doom Report newsletter and is the director of Marc Faber Ltd. Last month, he wrote:

“2017 will be [when] the US Economic causes a World Economic Collapse! Trump can’t stop a dollar crisis, stock mark crash or gold and silver prices skyrocketing! “. (source)

Faber was also quoted in an article on The Sovereign Investor:

Mark Faber, Dr. Doom himself, recently told CNBC that “investors are on the Titanic” and stocks are about to “endure a gut-wrenching drop that would rival the greatest crashes in stock market history.” (source)

Harry Dent, Harvard economist, predicts the safe-haven of gold will be wiped out during 2017. From a conversation with Economy and Markets:

“While many economists will argue that gold is not in a bubble… and insist it will soar to $2,000, $5,000 and even $10,000, my research has said otherwise…I’ve never been more certain of anything in over 30 years of economic forecasting.”

Incidentally, here is his latest report. Ann Rutledge is a fixed income analyst who is a regular writer for Forbes. She analyses economic patterns and feels the slide has been underway since 2013. Last year, she wrote:

“So, if you ask me whether we are going to have another global financial crisis in 2017…I would say the odds are good. This one probably started in 2013 and by now is well under way.” (source)

Peter Costa, president of Empire Executions, has taken the unprecedented step of pulling out of the markets ,believing that they are overpriced and that a major correction is on the way. In an interview, he said:

“I think that a lot of these stocks, big cap, small cap, they all got ahead of themselves. And I think that there will be a correction to bring them back to some sort of normalization in pricing and once it gets back there, I’ll be back in the market.” (source)

“GDP growth is very unlikely to support the rate of credit expansion that the Federal Reserve wants (or, more accurately, needs). And what will happen if it indeed doesn’t? A lot of painful, awful things – but central among them is a currency crisis. Amidst the ensuing unpleasantness will be an awakening within today’s hyper-financialized markets to the huge imbalance now existing between paper claims and ownership of real things. A massive wealth transfer from those with ‘paper wealth’ (stocks, bonds, dollars) to those owning tangible assets (the productive value of which can’t easily be inflated away) will occur – and quickly, too.”  (source)

Michael Covel, a teacher of trend-following and financial strategy ,thinks the collapse will start in Europe and then spread to the rest of the world. He explains why in great detail, calling it chillingly “the next Lehman moment.”

“Deutsche Bank has startling leverage of 40 times. Leverage is the proportion of debts that a bank has compared with its equity/capital. That means Deutsche has 40 times more debt than equity/capital. Keep in mind that Lehman Bros. was only 31 times leveraged when it imploded in 2008 and sparked the worst global financial crisis since the Great Depression…France’s clear discontent with the EU can’t be overstated. The EU might survive Brexit. But a French divorce from the EU would be cataclysmic, both financially and politically. It would mark the official end of the EU. …Bank runs would spread as consumers sought the safety of cash well before the actual earth-shattering event took place. It would start in French banks… and the knock-on effects would spread to other European banks that have relationships with French banks. This would create a huge decline in confidence, leading to a European-wide decline in bank lending. And these bank runs would spread into a more widespread financial crisis in the global financial sector. Non-eurozone financial institutions in the U.S. and Asia would come under immense pressure because they too have heavy exposure to European banks. (source)

“Emerging markets are the soft underbelly of the global economy. Many analysts expect the election of Donald Trump to the White House will change the United States’ economic and monetary policies. This could worsen conditions for businesses in emerging markets that are financed in U.S. dollars. The result might be a global economic collapse in 2017.” (source)

Jim Rogers, who founded the Quantum Fund with George Soros, is on the record as saying:

“A $68 trillion ‘Biblical’ collapse is poised to wipe out millions of Americans.” (source)

Andrew Smithers, an economist with an unsettling history of being prophetic, was quoted in the same article.

“U.S. stocks are now about 80% overvalued.” Smithers backs up his prediction using a ratio which proves that the only time in history stocks were this risky was 1929 and 1999. And we all know what happened next. Stocks fell by 89% and 50%, respectively. (source)

What do you think?

Personally, I’m prepping harder than ever before.  I’ve spent too much time researching the collapse of Venezuela to sit idly by and let my family face the same hunger and desperation that is rampant there. Right now, a few rocks are falling, warning of an imminent disaster. If you aren’t prepped, you still have time. Go here to learn more. If you wait until the avalanche begins, it will be unstoppable. You will have waited too long. My suggestions are:

We’ve been in a decline for years. Our national debt has reached monstrous proportions. Even if Trump is able to pull off a miracle and turn things around, there will have to be drastic cuts for this to happen. Painful ones. People will suffer. And I’ll do everything I can to protect my family before that happens.