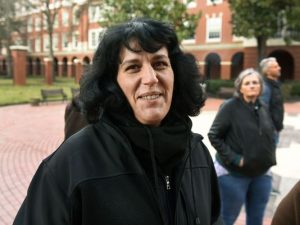 by Travis Dorman, published on Knoxville News Sentinel, on July 17, 2018

Heather Ann Tucci-Jarraf believes her imprisonment will amount to a “hostage situation.”

The former prosecutor turned evangelist for the so-called sovereign citizens movement said as much Tuesday before U.S. District Judge Tom Varlan sentenced her to serve 4 years and 9 months in prison for conspiring to launder money. Her sentence will be followed by two years of supervised release.

A jury in Knoxville found Tucci-Jarraf guilty of the federal charge in February. Authorities say she counseled Randall Keith Beane while he used electronic sleight-of-hand to rip off a bank to the tune of millions of dollars.

Beane also was convicted of conspiracy to launder money as well as wire fraud; his sentencing is set for July 24.

At her three-hour-long sentencing hearing, Tucci-Jarraf gave a 45-minute speech during which she repeatedly denied the jurisdiction of the judge, used terms like “collusion” and “foreign actors,” cited convoluted legal documents, and portrayed herself as a bold truth-teller being persecuted for working to expose the alleged corruption within the U.S. banking system.

“I’m the one voice they don’t want heard,” she said of the Federal Reserve.

Prosecutors accused Tucci-Jarraf — who has a sizable following online, where she’s often referred to by her initials, HATJ — of merely seeking fame. They pushed for a longer sentence, citing the need to deter others, like Beane, from following her advice to commit fraud.

“This is not a vast conspiracy,” Assistant U.S. Attorney Cynthia Davidson said. “The defendant is not a martyr.”

Prosecutors during the trial said Beane, an Air Force veteran working for Advantage Innovations in Knoxville, owed tens of thousands of dollars to the United Services Automobile Association, an online banking service catering to current and former military personnel.

Beane came across a YouTube video shared on social media by Tucci-Jarraf, a licensed lawyer in Oregon who worked as a state prosecutor there before she became involved in the sovereign citizens movement.

The video claimed Americans can withdraw vast sums of money from secret bank accounts with the Federal Reserve. It recycled discredited tropes popular among sovereign citizens, a loose collection of fringe groups that believe in a mishmash of conspiracy theories.

Followers typically deny the legitimacy of government authority and believe reciting the right legal jargon can unlock untold riches and exempt them from the law.

Prosecutors said Beane used automatic delays in the banking system of transfers of money from one bank to another to buy certificate of deposits using the Federal Reserve Bank’s routing number and a fake checking account number, quickly liquidating the CDs and stashing the money in his USAA accounts. USAA allowed its members to make withdrawals before the transaction was approved and funded.

Beane opened $30 million in CDs and cashed in roughly $2 million before USAA discovered the trickery, according to court records.

He used some of the money to pay off debts and to buy a half-million-dollar motor home — complete with two bathrooms, marble floors and countertops and pop-out side rooms — from Buddy Gregg Motor Homes in Farragut last year.

Prosecutors said Tucci-Jarraf talked Beane through the fraud “every step of the way,” and that she helped him set up a trust to try to hide the motor home purchase.

A few days after Beane’s arrest, Tucci-Jarraf was arrested outside the White House after the FBI got a tip from the Secret Service that she was demanding a meeting with President Donald Trump.

‘I don’t know what to teach my kids’

Tucci-Jarraf represented herself throughout the trial but at sentencing was joined by Attorney Francis Lloyd.

Much of the hearing revolved around whether Tucci-Jarraf’s sentence should be lengthened because she used “special skills” — in this case, her legal training — to commit or conceal the crime. Judge Varlan ultimately ruled the enhancement to be applicable.

Tucci-Jarraf then called two witnesses to testify on her behalf: her husband, Youssef Jarraf, and a friend, William Ferguson III, who described himself as a blogger who also worked to root out alleged corruption in the banking system.

Ferguson called Tucci-Jarraf “the most kind human being I’ve ever known” and said characterizations of her as “internet hungry” are wrong. At one point, he appeared to compare her to Mahatma Gandhi and Nelson Mandela.

Youssef Jarraf spoke haltingly, repeatedly wiping away tears as he talked about his wife and the four children they have together. “I don’t know what to teach my kids, what to tell them about justice,” he said.

Both men said they didn’t believe Tucci-Jarraf had committed a crime and that she didn’t deserve to be sentenced at all.

Youssef Jarraf asked if his wife could be housed in a prison in or near Boston, where he lives. Varlan said he would make the recommendation to the U.S. Bureau of Prisons.

In deciding her sentence, Varlan said he considered that Tucci-Jarraf had no history of mental illness or substance abuse, and that she had no prior criminal history to speak of. The sentence he imposed was less than prosecutors asked for and in the middle of the sentencing range.

After Varlan announced his decision, Tucci-Jarraf again denounced his authority — and asked the court clerk to file a notice of appeal.