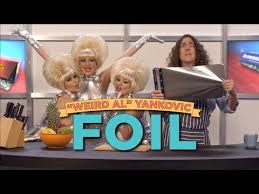 Weird Al Turns Lorde’s ‘Royals’ Into A Song About Foil And Somehow Also The Illuminati
The Huffington Post, By Katla McGlynn, published on July 16, 2014

“Weird Al” Yankovic is no stranger to food-based parodies (where would he be without “Eat It?”), but his spoof of Lorde’s song, entitled “Foil,” is about so much more than leftovers.

In the third release off his new album, “Mandatory Fun,” Weird Al teamed up with CollegeHumor on a music video for the song that turns Lorde’s infectious “Royals” into a diddy about the many, wonderful uses of foil (e.g. making a hat so aliens can’t read your mind).