by Tyler Durden, published on Zero Hedge, on September 9, 2019 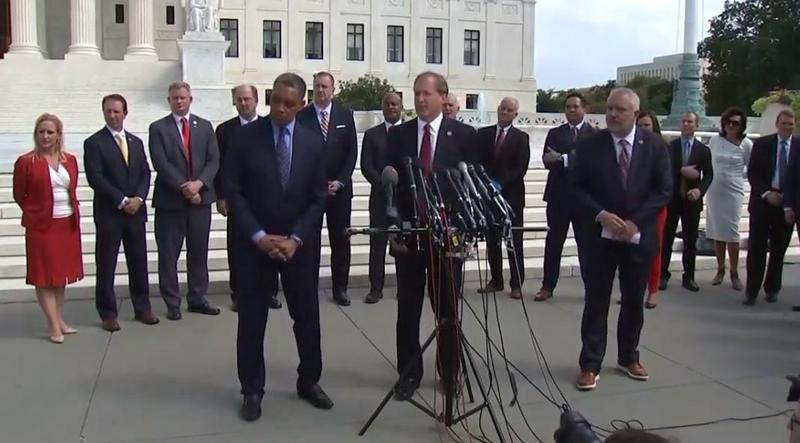 Update: During the post-conference Q&A, Paxton revealed that, though their investigation is still in its early days, the AGs have already issued subpoenas related to Google’s digital advertising business.

“If advertising costs are higher…who ends up paying that?” Paxton said.

Asked about coordination with the federal government, Paxton and AG Sean Reyes of Utah, intimated that they had reached out to the FTC but that their response was unsatisfactory.

Washington DC’s AG Karl Racine insisted that their probe wasn’t intended to send a message to Congress, but that the AG’s investigation is an independent action. Later, Paxton said the investigation would be a “very open process” with the states, with each state and the federal government allowed to offer input.

“We’re open to using talent from every office in this country.”

And with that, the AGs ended what was a rather brief Q&A that lasted roughly ten minutes.

In the latest legal push that could ultimately result in the break-up of one of the world’s largest tech firms, a bipartisan group of more than 40 state attorneys general, led by Texas’s Ken Paxton, will unveil a sweeping anti-trust investigation against Google parent Alphabet Inc.

The anti-trust investigation, which was previewed late last week in a leak to the Wall Street Journal, aims to hold Alphabet accountable for the extreme concentration in the US technology industry. Specifically, the AG’s case will focus on Google’s influence in search and the digital advertising market, and whether the Silicon Valley giant’s overweening influence harms rivals and consumers.

Part of the message from Monday’s press conference will be asking Google employees who might have information about Google’s abuses in the online advertising market to come forward.

The investigation is being pursued alongside a flurry of federal lawsuits and investigations against the biggest tech firms being led by the DoJ (with the FTC assisting), as well as another investigation brought by state AGs against Facebook.

The press conference kicking off the investigation will take place on the steps of the Supreme Court Monday afternoon.

According to Politico, eight attorneys general will make up what’s known as the “executive committee”. These states include: Texas, Arizona, Nebraska, Louisiana, North Carolina, Colorado, Iowa and Mississippi.

AGs will explore whether Google and its fellow tech behemoths are stifling start-ups, delivering worse service and siphoning off too much personal data to bolster their bottom-lines at the expense of consumers.

“The growth of these [tech] companies has outpaced our ability to regulate them in a way that enhances competition,” Keith Ellison, a Democratic attorney general from Minnesota who is signing on to the effort to probe Google, told the Washington Post.

“They need to be regulated,” he continued, “and my view is, it’s the state AGs job to do it, particularly when the federal government is not necessarily a reliable partner in the area.”

State AGs have been warned that Google will do everything in its power to “stonewall” these anti-trust investigations using formidable defensive tactics, despite the company’s promises of cooperation.

While Washington has typically taken the lead in investigating anti-trust matters dating back more than a century to the trust-busting days of the Gilded Age, state AGs are coming off a notably successful run, including their successful takedown of Purdue Pharma and other drug makers over their role in fostering the opioid crisis.