Hundreds of thousands of Hong Kong protesters, fighting for judicial autonomy and protesting a Beijing edict to transport accused criminals to mainland China for trial and incarceration sing and sway together, “Sing Hallelujah to the Lord.”

Their spirit of determined solidarity grows by the day, even as their beautiful city is besieged by hundreds of thousands of communist Chinese troops that are massed at the Hong Kong border and have infiltrated both the Hong Kong police force and civil service sector.

Pepe the Frog may be their chosen mascot and the American flag their favorite symbol, but now, Hong Kong’s inspirational yearning for freedom has an official anthem as protesters have adopted “Sing Hallelujah to the Lord,” as their common prayer for humanitarian recognition of their struggle against the tyranny of Beijing

WATCH: “God is alive in the hearts of the people of Hong Kong,” the pastor says in Cantonese. “He hears us and stands beside us in the fire.”
In the midst of the chaos and the threat of brutal genocide by a totalitarian regime, the spirit of the Almighty God is moving in Hong Kong, as witnesses recount a movement of mass revival and personal spiritual salvation that is sweeping the ranks of political protesters in moment by moment experiences of the touch of Christ in the lives of oppressed people standing firmly for their beliefs.

The looming threat of violent invasion and suppression of the Hong Kong protests has most experts predicting a spectacle that could dwarf the carnage and bloodshed of the Tiananmen Square student uprising in 1989 that left 60,000 dead and another 40,000 incarcerated or executed for sympathizing with that movement as People’s Liberation Army soldiers mowed down waves of protesters and ran them over with armored vehicles and tanks.

So far, skirmishes between protesters and police have been episodic and limited in scale. Observers believe Beijing is simply waiting until sufficient numbers of PLA resources are staged in the area in order to quell the uprising with overwhelming force. 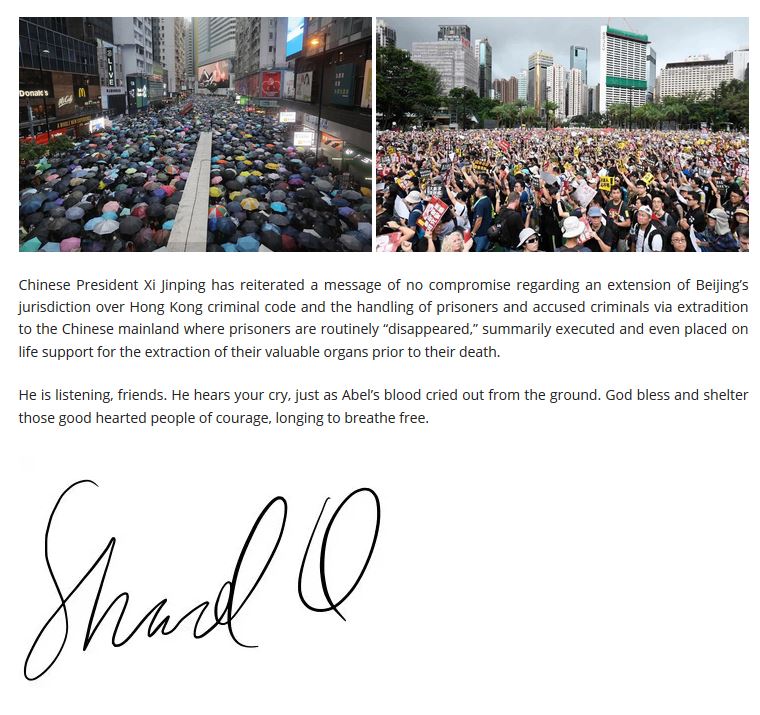