Warning: The Lab Rats Have Escaped

Warning: The Lab Rats Have Escaped 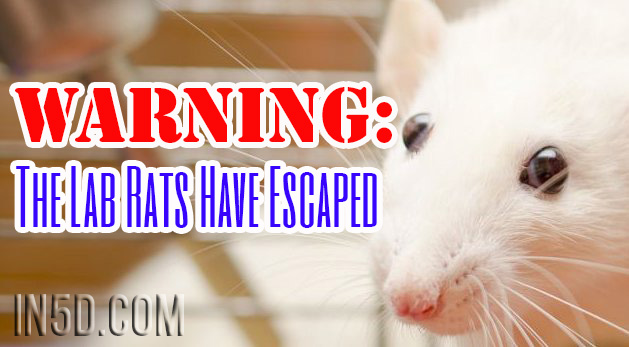 From the various accounts of holiday experiences, it appears the rats (and mice) have chewed through their mazes and escaped culminating in a successful coup.

For those of you unfamiliar with psychology student’s study of behavior modification techniques, laboratory rats are trained to run a maze by getting a food pellet if they learn and then take the designated path. Mastering that level, the maze is littered with obstacles and may eventually even require the trapped rodent to press a lever to get his food pellet.

Watching the holiday season unfurl this year, it started much the same as previous years with people running about like rats in a maze. They maneuvered the department store isles, leapt hurtles, repeating what they had been taught since the days of ‘ole. The baffling part was how all had been trained to accept as just reward the accompanying whopping credit card bill instead of a food pellet.

Perhaps it is one of the waves we’ve been reading so much about, perhaps sunspots or even solar flares but I personally noticed and experienced stark differences between this and prior years once the family and friends gathered. EVERYONE sharing their 2016 holiday experiences reported similar occurrences.

Synchronicity abounded and once the day of festivities arrived, only those that resonated with love, joy, forgiveness, compassion, and excitement actually showed up for the gatherings! At times it was last minute “snafus” and at times it was a culmination of months where disharmony reigned supreme. Either way, love, joy, peace and grand fun was had by all. For those of us comparing notes, it was the BEST Thanksgiving and Christmas holiday season we’ve ever had or could ever have imagined having. There were absolutely no disharmonic resonances among those gathered.

Thinking back on how the season predictably began with everyone running around like lab rats trapped in a never ending maze, a difference clearly emerged at the end. It seems people had organically fallen into one of two distinct categories:

1. The closed-minded, opinionated group that only embraced others willing to run the maze as constructed. Strict compliance was required. Anyone falling outside of set parameters were denied the “food pellet”. Want a food pellet? …. run the maze as dictated or starve.

2. The loving, open-minded, diversity embracing group where no such maze existed. These people, while having wildly differing political stances, a variety of beliefs systems, different socio-economic statuses were connecting in amazing ways. Their only goal was to have a joyful, loving, happy experience.

It was absolutely fascinating to watch the die-hard NASCAR enthusiast, bubbling over with excitement, sharing the success of his favorite driver’s season with the classically trained opera and symphony lover. It even got better when the NASCAR enthusiast actually LISTENED and was INTERESTED, really interested to learn about what the classically trained person had to say about operas and symphonies!

Here is the future of humanity, the evolution of the human race, the flourishing instead of merely surviving, the thriving, prospering, new social structure being co-created: Escape from the maze. Chew your way through if necessary.

All levity aside, it is becoming ever increasingly apparent that those in the loving, diversity embracing, open-minded group, without planning or organized orchestration of any kind, are organically coming together and networking in ways that are moving towards sustainable options for living.

These new foundations are built on love, acceptance, encouragement, trust, joy, diversity, understanding, communication, compassion, and compromise. It starts with heart centered and focused open mindedness. A quote from Isaac Asimov (1920-92) seems strikingly relevant. He said, “The most exciting phrase to hear in science, the one that heralds new discoveries, is not ‘Eureka!’, but “That’s funny.””

Our heart centered way of life will not unfold from shouts of “Eureka, the rats are still running the maze as intended!” Reality will change when we hear the distant voice proclaim, “That’s funny…. Where have all the rats gone?”

Wishing you each joyful and loving journeys,

About the author: Amina Deb Lewis has been a seeker and student in esoteric, spiritual and scientific studies for over 40 years. As the proverbial square peg in a world of round holes, her greatest joy in is sharing various perspectives and tools on living your Individual Unique Truth to its fullest capacity possible. Contact info: Deborah@TransformingToEssence.com