VL’s Pentagon Insider Reveals All in a Q & A

VL’s Pentagon Insider Reveals All in a Q & A 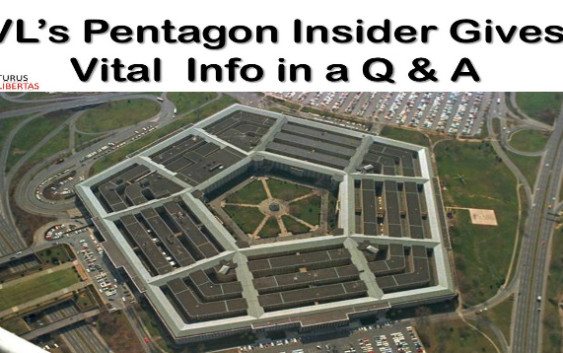 We have been reaching out to our Pentagon insider and…  FINALLY!  We got a reply and he has agreed to answer some questions about Vault 7.

Q. Vault 7 is the biggest story of the year, right?

A. It gets bigger by orders of magnitude.

Q. So what happens now?

A. The story will go well beyond Implants, C2’s, and LP’s.

Q.  What does that mean?

A. Listening posts, Malware. The danger is in how the CIA declassified “war code”. They also failed to keep different eggs in different baskets. This can be blamed on the agency not wanting to loop NSA in their plans. In essence, the CIA sought to create their own NSA.

Q. What do you see happening next?

A. Well, “Whack A Mole” takes on a whole new meaning!

A.  The media steps in. Talking heads bemoan the “threat to national security”, blame Russia, avoid any mention of Uk involvement or Israel, which by the way, is furious beyond belief and scared shitless  at the release of  Vault 7… as are the Brits.

Q. We keep hearing this. Why?  The Brits and Israeli’s are allies, right?

A.  Define ally? The CIA, MI6 and Israeli secret service have been engaged in asymmetrical espionage on civilians, both domestically and abroad. They turned their tradecraft on the civi’s. Thats not going to play out well. There are bigger floods ahead, I fear.

A. Its a term used to denote large scale leaks or breeches in intelligence.

Q. What type of things can we expect?

A.  Right now, the first dump concentrated on the CIA’s toolkit. The fear and loathing barometer tells me there is real concern the source code will get leaked, and even bigger concern the CIA’s past ‘activities” get exposed. If that happens, we will have a shockwave and an instant realignment of friends and foes.

Q. Could you explain further?

A. Lets say Wikileaks divulges that the CIA engages in domestic espionage in tandem with Mossad and MI6… Lets say CIA looks the other way while foreign nations are allowed to surveil American citizens… Lets say the people find out we created Isis with Israel, or the CIA really did neutralize Kennedy. Imagine how the citizens will view the CIA, Mossad and MI6.  In truth, these entities are not the beast, but rather the claws of the beast.  The combination of the CIA, Mossad and MI6 can be considered the greatest sponsors of terrorism in the world.

Q.  Wow. So you are saying Wikileaks may leak the secret history of the CIA?

A. I am sure its coming. Why did they use a Kennedy quote referencing the CIA’s destruction as their passphrase? I am pretty certain they plan to expose just who was behind the Kennedy assassination.

Q. If foreign nations were behind 9/11, will the people sit idly and forget about it and go back to their everyday lives?

A.  2 years ago, I would have been confident they would have behaved as the lemmings the CIA expects them to behave like. But the foundation of trust is eroding. People no longer trust DC, MSM, Banks, our courts, etc.

Q.  Will Pedogate ever be fully exposed?

A. Vault 7 will make certain that Pedogate is exposed. CIA and Mossad are behind much of it. Many in my close circle welcomes what Wikileaks has done.  Most military servicemen serve honorably. Most law enforcement as well. We want the swamp drained. If Trump muzzles Pence, and guides this nation by his instincts, my guess is he will gut the CIA, modernize it, kick the MI6 and Mossad out of the tent and start re-evaluating who our friends are.  Start with Saudi Arabia. Our relationship with the UK is very good from a military standpoint. That will not go away. But, we need to weaken the power and reach of our current intelligence community as it is forced to disengage from foreign intelligence services like Mi6 and Mossad. We have to stand alone.

Q.  Whats the immediate effect of Vault 7 for the average computer user?

A. Siege mentality, I would imagine. Is your anti virus actually a virus?  You will see computer “eye patches” being sold to cover the camera. Users will start to physically disable their mics, and only use headphone mic’s that you can detach when not using it.The public will equate all internet enabled consumer products as weapons of espionage and potential murder. The climate of the American public is one of distrust and apprehension.  They do not feel protected.  If you’re talking about a failure to protect America people, you can add, the CDC, the SEC, the USDA, Homeland Security, and just about every other branch of government.

But, the sub rosa conclusions swim in even deeper waters. America feels sabotaged by it’s Government. We falsely believed we were spectators at a Roman Arena, watching the blood sport of foreign wars on our flat screens and computers. Iraq, Syria, Yemen.

But, now we have soft terror in France, Germany, Turkey, United States, and so on.  And with the revelation of our devices listening in on us, its clear we are not spectators in the Roman Arena, but lion and gladiator fodder, as well.

Q. So its all going to hell?

A. No.  Vault 7 is a good thing, actually. From a military standpoint, it’s better to protect an aware civilian population than one that is programmed and obtuse . The average Joe and Mary damn well want to know if their kids are being spied on. The exploitation of these cybertools, in the hands of pedophiles, psychopaths and phishermen is what should really alarm people.  This is a watershed moment in American history, The pursuit of privacy may eclipse the pursuit of happiness.

Q. Can I trust my phone?

A. Google’s Android Operating System is used in almost 9 out of 10 smart phones globally. Google, Facebook and Apple may very well have sold backdoor access to the CIA. We call it Judas technology.