VIDEO: Democrat Leaders Pelosi and Schumer Caught on Camera Doing Victory Dance After They Thought They Goaded Trump into War with Iran!

VIDEO: Democrat Leaders Pelosi and Schumer Caught on Camera Doing Victory Dance After They Thought They Goaded Trump into War with Iran! 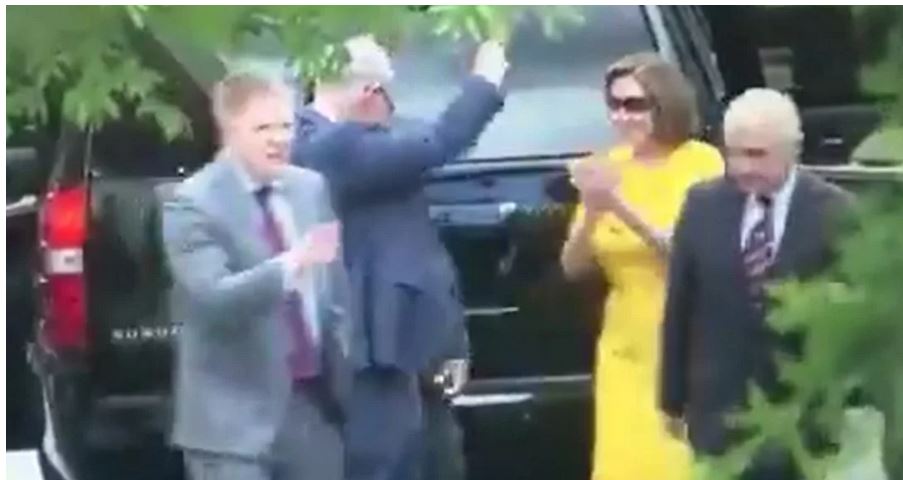 The leaders of the Democrat Party could not care less about 150 Iranian lives.  They couldn’t care even less about the fate of our country.

Everything, everyday to them, is about power and how to steal it and keep it.

Rather than attempting to make America a better place or keeping America great, Democrat leaders are all about power.  On Friday before President Trump decided not to drop bombs on Iran for knocking down a US drone, the President met with Congressional leaders in the White House to discuss the situation.

After the meeting, Democrat Senate leader Chuck Schumer from New York and Democrat Speaker of the House, Nancy Pelosi, could be seen cheering outside the White House. As they approached their cars, Schumer raised his hands in victory and Pelosi was smiling and cheering on Schumer.

Well now we know why Chuck and Nancy were celebrating last night. They thought the Deep State had goaded Trump into war, exactly as they planned with their FF. Trump outsmarts them again! #WRWY #GreatAwakening #WWG1WGA #Qanon #MAGA #MEGA #WeThePeople pic.twitter.com/njd1OmOlIu

The Democrat leaders clearly wanted President Trump to make a wrong move so they could criticize him endlessly for getting America into another bloody war.  They don’t care about protecting the US, standing for justice or protecting innocent lives.

It is clear that the Democrats are not about protection of human lives or what is best for the USA.  These leaders seek power. What wicked people.

UPDATE: The liberal media says Schumer was dancing because he was overjoyed his mother had been released from hospital.
That’s what Schumer says.
OK.

1 Comment to “ VIDEO: Democrat Leaders Pelosi and Schumer Caught on Camera Doing Victory Dance After They Thought They Goaded Trump into War with Iran!”