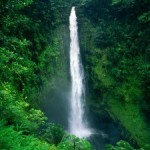 Not often do we score a legal win against biotech, but today we completed the mission here on Hawai’i island! Today Bill 113 was signed into law, banning further GMO crops from being cultivated on our island. If you read no further (and you should), please tell these good people thank you by signing our letter here.

Many of us worked long and hard, day and night on this: signing and sharing petitions; writing letters to newspaper editors and to authorities; preparing both written and oral testimony; studying the science and cultural concerns over GMO; networking and meeting with one another, engaging in debates on-line and in-person, meeting with council members and farming groups; and attending what seemed like endless streams of county council meetings over months to share our testimonies for why we want to keep the toxic GMO industry off our island.

Today justice and intelligence, good science, and our love for nature prevailed! After the last hearing’s 6-3 vote in favor of the bill at council chambers, today our mayor, Billy Kenoi, signed Bill 113 into law—to our utter shock and surprise! He had three options: sign the bill into law, veto it, or do nothing and it automatically becomes law. Most of were sure he would veto it; he was receiving pressure from our Governor, Neil Abercrombie, who is a known biotech supporter and rumored to be a recipient of “favors” from the same. But today, justice and respect for the Good Earth prevailed!

With regard to signing bill 113 into law, Christine Hirasa, a spokeswoman for Hawai’I Governor Neil Abercrombie, said that such decisions should be “based on proven science.” We are grateful that after months of testimony from reputable scientists, physicians, and others in the health and agricultural sectors, the sound science revealing the destructive and dangerous track record of GMO “farming” methods and GMO foodstuffs (let’s not call it food) has indeed supported a level-headed and fact-based decision to ban further GMO agriculture on Hawai’i Island. Add to this the heartfelt, first-hand experience of all those who testified—those with families and neighbors plagued by cancer, immune deregulation, chronic headaches, asthma, debilitation, newborns with birth defects, and on and on—and the evidence was overwhelming in favor of putting an end to the suffering caused by the GMO biotech mayhem.

I was expecting the veto to be announced tomorrow, but it came unexpectedly today. I had prepared myself all week to be heartbroken, so when I unexpectedly heard the news today I was awestruck, elated, and broke down in tears. We had just won a hard-fought battle against biotech and special interests in the worldwide war against GMOs and the horrors they bring with them. This is a victory for every sane person, and what we hope is a new trend in the United States, the most progressive yet idiotically GMO-friendly government in the world. Time to stop the bullshit; may this draw a line in the sand. We on Hawai’i island hope that each of you will take the baton from us and draw the line in your own communities.

Tonight I am deeply grateful to all those who sacrificed pleasure and leisure to fight for this ban. To all those who worked overtime in addition to their regular job. To all of those, like myself, who put everything else on hold (even writing for WuW!) to work for ground-breaking justice. Today we got a rare sweet victory that feels so damn good!

Not half an hour after getting the news I got off Facebook and screamed for joy, ran out to my thriving organic orchard, fell to my knees, and wept like a child. I was overwhelmed. The rest of the night was spent emailing and Facebooking and calling friends and fellow activists who all had a hand in this. We worked so hard. And that is what it takes. People who have that fire in their belly to make a difference and not let lies and corruption usurp our wellness. The passionate people who don’t really think twice to push themselves when any number of excuses and justifications for not doing so would be totally valid…except if you actually want to change the status quo. It takes a big heart, a deep love, passion, and a reverence to humbly do the leg work, to take action, and do what seems undoable.

This is a win for the whole world, not just for our island. It means that you can do the same. You can lobby your council members and local government to craft a legislation to do the same. You can create citizen-based initiatives like California and Washington State recently did. Check out the free services offered by Citizen’s Environmental Legal Defense Fund (CELDF), who can help your community get the ball rolling to take back your rights and health (we are working with them too). It’s all worth it—to live by what you know is right and fight for what you love. We need everyone standing up all over the USA and in every other local district around the world to say NO to biotech’s poisons. No to fracking, which we also banned a few months ago. No to strip mining. No to all the crap that is tearing down our world. Frack you! We are taking back our freedom and health!

We did it here on Hawai’i island against all odds. We honestly never thought we’d win this thing. This is a miracle, a small miracle in a world gone crazy with lies and selfish nonsense—the pathological meme that has got to stop. You can stop it when you gather with your community and create grassroots resistance. Just begin, take the first step and let it grow.

We thank our two council women heroines, Margaret Wille and Brenda Ford, who both took the bold steps to draft legislation to get this ball rolling. We thank the other council members who supported it and our mayor for not playing the fool, but doing the right thing! This is now the second GMO win in a short time span; the first was Kauai island’s hard-fought battle to get Bill 2491 passed, which requires the GMO industry to disclose all restricted-use pesticides and to respect mandatory setbacks from their toxic fields.

Join us in celebration and help us further this victory!

1) By signing this thank you letter to our Mayor and council members who supported the bill to ban GMOs.

3) Enjoy this educational rebuttal to the nonsensical “Ag Letter” put out by the propaganda-wielding GMO front groups that fought this bill.

4) Check out this highly educational petition letter included in this WuW article to the council member from my district, which did not sway his vote. Shame on you, Mr. Greggor Ilagan! We will be seeking your replacement!

6) Don’t buy GMOs…. check your labels! Here’s an easy guide to help you.