VETTED NOTICE TO THE WORLD: “The IRS has never been authorized to collect taxes or enforce any laws” 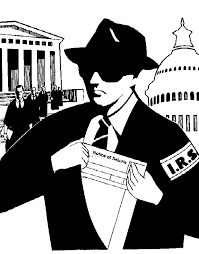 VETTED NOTICE TO THE WORLD: “The IRS has never been authorized to collect taxes or enforce any laws”

Psa. 89:14 “Justice and judgment are the habitation of thy throne : mercy and truth shall go before thy face.”

VETTED NOTICE TO THE WORLD

THIS NOTICE Challenges the income tax, and the authority of, and the very existence of the Internal Revenue Service. We offer this notice to you as a Caveat. Beware of being duped by IRS people. They have no authority anywhere whatsoever. The only legal offices of the Commissioner of Internal Revenue are in the District of Columbia, and cannot be operated outside the District. All the outlying offices were abolished in 2001.

The IRS has never been authorized to collect taxes or enforce any laws. And since March 9th, 2001, the Commissioner has had no legitimate Offices outside of the District of Columbia. But the IRS continues to pretend to be the nation’s tax collector, using the United States Mails to extort money from the public.

In August of 2003, Ms. Vernice Kuglin was acquitted of several charges of “willful failure to file” and “false information on W-4’s” because Ms. Kuglin had asked the government to produce the taxing statute that made her liable to do so, and the government had failed or refused to produce it. And it seems that there are at lease two other cases that are similar in nature. In U.S.A. v. Lloyd Long, in 1993, a similar verdict was reached by a jury in Tennessee. Prior to that, in 1991, John Cheek (Cheek v. United States, 498 U.S. 192) argued before the Supreme Court, which held that since the government had not produced the required taxing statute, that he could not be convicted of willfulness.

Thus it is now res judicata that the government cannot produce the taxing statute, i.e., “the issue’s been definitively settled by judicial decision.”

The government cannot produce the taxing statute because Congress repealed all the internal revenue laws in 1939, and has never re-enacted them. The Code of 1954 did not, and could not, repeal or modify the Code of 1939, hence it is not a code of laws; its unenforceable as law. Hence we demand that the President, his Cabinet, the Congress and the Judiciary, examine the facts presented here and either rebut the facts and conclusions or admit that there is no “internal revenue law” to enforce. And even if there were, that the IRS could not enforce it.

We accuse the United States Government of perpetrating a hoax upon the American people that has reduced all of us to a condition of involuntary servitude in violation of the Thirteenth Amendment and federal laws found at 18 USC 1581, and 42 USC 1994. Millions of us in the states of the Union living OUTSIDE of the federal legislative jurisdiction involuntarily pay tribute to the federal government annually in order to avoid having our property taken from us by IRS mail, rather than the court orders required under the Fifth Amendment to the U.S. Constitution.

IRS letters are more powerful than any law, or any court order, but they lack legal authority. By these bogus letters and the illegal responses to them by fearful employers and banks everywhere, the IRS has exceeded its delegated authority to become an illegal enforcement agency, and hence a financial terrorist protected from its wrongdoing by corrupted federal courts, by abusing official and sovereign immunity over the District of Columbia. An examination of the Treasury Organization Chart, found in the 2003 U.S. Government Manual on p. 339, reveals that the IRS is NOT an enforcement agency, since it does not come under the Undersecretary for Enforcement as all other Treasury enforcement related activity does.

In 1944, the then Chairman of the New York Federal Reserve, Beardsley Ruml, gave a speech to the American Bar Association, entitled “Taxes for Revenue are Obsolete”. In his speech to the Bar, he said that taxes for revenue purposes are obsolete, because the government could now print all the money it needed to pay its bills. It could use taxes for other purposes, such as implementing “national policies” for other things.

The recent Kuglin case puts the government on notice that the best defense the people have against suits for non-filing or non-compliance with “the tax laws” is to demand a copy of the taxing statute, which the government cannot provide. It is shameful for the government to prosecute people for violating laws it cannot produce. We have become the laughingstock of the planet as a result. To permit such idiotic things to occur makes the United States an embarrassment to the people they theoretically serve. We all should be embarrassed. In light of the recent Kuglin case, the question we all have, now, is “what federal law imposes a tax on me, my activity, or my property?” More precisely, “where is the taxing statute that is represented by the Code, that imposes the alleged tax on me, my property, or my activities?” If the government fails to produce the un-repealed taxing statute, it can never convict anyone for violating it ever again.

The Act of 1939 repealed all the taxing statutes, but the Bureau of Internal Revenue continued to mail out tax returns for the “tax year” 1939-1940 and subsequent years, even though those years were not “tax years”. Treasury Order 150-02 cancelled all the outlying offices of the IRS, but nobody told the IRS. They think they’re still in business.

We bring these matters to your attention because it is only a matter of time before people start reading the laws for themselves, and discover what government officials and their predecessors have done, promoted, or simply permitted to happen. They directly or indirectly have led the American people to believe lies about the law, promulgated, or permitted by them and those who carry out their orders.

This whole mess is the responsibility of the President to admit to and clean up under Article 2, Section 1, Clause 8 of the U.S. Constitution. It is his appointees and employees who are perpetrating this hoax, and it is his duty to take care that the laws of the United States, made in pursuance of the U.S. Constitution, are faithfully executed.

It is time for the President of the United States, Congress, and the Justices, to “fess up” and admit that there is no “income tax law” codified in the Code of 1954, yet they have allowed us to believe, or promoted the notion, that the Code is real, honest-to-goodness law. Even to this day, Congressmen continue to mail their constituents letters in response to their tax questions assuring them that the Sixteenth Amendment authorizes the federal government to collect taxes on labor. They tell this bald-faced lie in spite of the fact that the Supreme Court has admitted many different times that the Sixteenth Amendment “conferred no new power of taxation.” (See Stanton v. Baltic Mining Co., 240 U.S. 103 (1916)).

You must admit that the IRS is out of business, and that the Secretary of the Treasury and the Commissioner do not have constitutional power to collect taxes. The Secretary is an accountant, not a cop. The Congress is still the nation’s tax collector. It is just not doing its job right now. Soon, the IRS will be gone, and with it the false belief that the people must pay tribute to a foreign government (The Crown) through that instrumentality of injustice, or be ruined by it. We seem to be taxed for the mere privilege of existing. But the Constitution says that they cannot tax people or their property directly. Whether there ever was a tax on all the people or their activities or their property, if it was an “Internal Revenue law” the taxing statute no longer exists, and had no “force of law” after the “tax year” 1938.

We challenge anybody to disprove that all the official documents cited herein, and our conclusions drawn from them, by providing us with the taxing statutes enacted between 1939 and 1954 that were codified in and underlie the “Code of 1954″.

Please provide us with a considered timely response. We are fed up with “the tax laws are constitutional”or other irrelevant assertions made by ignorant IRS employees or public officials. If you can’t show us the taxing statute, then you must admit that we, as a nation, have a problem, and need to face it and work to get rid of it together. Thank you for your prompt attention to this serious matter.

VETTED NOTICE TO THE WORLD

We the Unified Maine Common Law Grand Jury fully concur with the above Vetted Notice To The World:

4 Comments to “ VETTED NOTICE TO THE WORLD: “The IRS has never been authorized to collect taxes or enforce any laws””