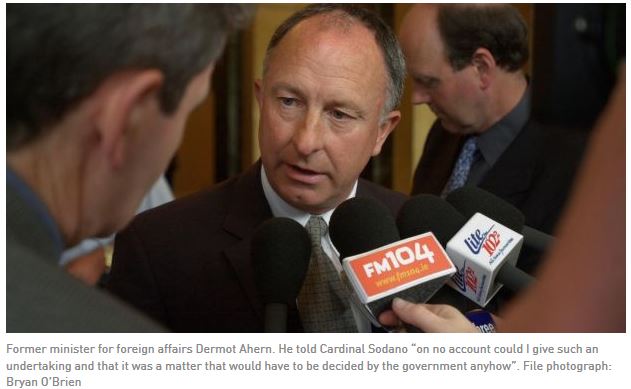 Former minister for foreign affairs Dermot Ahern says a senior Vatican official sought an agreement in 2004 under which Ireland would indemnify the Catholic Church against legal actions for compensation by clerical child sexual-abuse survivors.

“No one forewarned me. I was completely taken aback,” Mr Ahern said of the approach by Vatican secretary of state Cardinal Angelo Sodano.

Revealing details of the meeting for the first time, the former minister told The Irish Times: “The cardinal had just come off a plane from the US where he had successfully concluded claims. It was a very direct question. He wanted to know whether the Irish government would indemnify the Vatican against any similar claims in Ireland. He was as blunt as that.”

Mr Ahern told him that “on no account could I give such an undertaking and that it was a matter that would have to be decided by the government anyhow. I was very annoyed.”

The cardinal referred to the Irish State’s heavy involvement in education as possible grounds for such an indemnity where the church was concerned. “He referred to the US cases and the potential serious financial implications [for the church] in Ireland,” said Mr Ahern.

“I spoke to him in no uncertain terms about the separation of powers in Ireland and how the Irish State was a Republic and about the redress board [set up to compensate people who had been in religious-run institutions as children].”

The cardinal “knew things were being investigated in Ireland”, Mr Ahern said. At the time, the Ryan commission was investigating the abuse of children in orphanages, reformatories and industrial schools run by 18 religious congregations, and the Ferns inquiry was also under way.

Four months previous to Mr Ahern’s November 2004 meeting with Cardinal Sodano, the Commissions of Investigation Act was passed by the Dáil mandating the government to set up an inquiry into the handling of clerical child sex abuse in Dublin’s Catholic archdiocese.

The context of Mr Ahern’s meeting with Cardinal Sodano were celebrations marking 75 years of diplomatic relations between Ireland and the Holy See, beginning in 1929.

Mr Ahern was en route to a meeting with Pope John Paul when he met Cardinal Sodano. “I was on my way back from [Palestinian president] Yasser Arafat’s funeral and had begun our discussion about the Middle East. I was very annoyed. He was quite blunt.” The subject was not raised again.

Mr Ahern said he could not remember whether he informed the government when he returned to Dublin. “I may have, informally. I probably told Bertie [then taoiseach Bertie Ahern],” he said.

At an event in Rome’s Irish College during the same visit, Mr Ahern announced the Irish government’s intention to institute arrangements for “an open, transparent and regular dialogue with churches and with philosophical and non-confessional organisations”. This structured dialogue was launched at Dublin Castle in February 2007.

In The Irish Times on Tuesday, former president Mary McAleese revealed that in November 2003, a year previous to Cardinal Sodano’s meeting with Mr Ahern, she refused to discuss an attempt by the cardinal to secure an agreement with Ireland that it would not access church documents.

What she described as “one of the most devastating moments in my presidency”, occurred during a State visit to Italy when she had a private meeting with Cardinal Sodano, who was then Vatican secretary of state.

“He indicated that he would like, and the Vatican would like, an agreement with Ireland, a concordat with Ireland. I asked him why and it was very clear it was because he wanted to protect Vatican and diocesan archives. I have to say that I immediately said the conversation had to stop,” Ms McAleese said.

She hoped “those days are over, that everybody is more chastened now. Everybody knows now that the secrecy was certainly not conducive to the good of the church. It eroded credibility and it eroded trust,” she said.