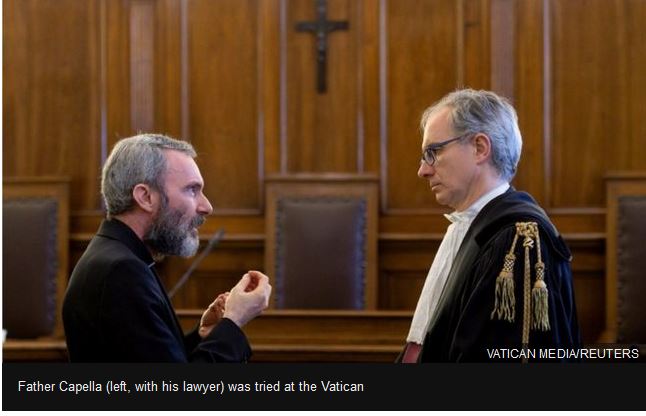 A former Vatican diplomat has been sentenced to five years in prison for child pornography offences.

Monsignor Carlo Alberto Capella pleaded guilty at a Vatican court, which heard that indecent images of children and a video were found on his mobile phone.

He said he had suffered a personal crisis while working at the Vatican embassy in Washington DC.

The priest was recalled from the US last year after authorities notified the Vatican of their suspicions.

The US had asked that Capella’s diplomatic immunity be lifted so he could face charges there. Canadian police later issued an arrest warrant for Capella, an Italian.

A prosecution witness told the court that an examination of the priest’s personal devices revealed more than 40 incriminating images, including an explicit video involving a small child.

The case is the latest allegation involving child sexual abuse to hit the Catholic Church.

All of Chile’s 34 bishops offered to resign in May following a child sex scandal and a cover up. Pope Francis has since accepted three of their resignations.

Also in May, Australia convicted the archbishop of Adelaide, Philip Wilson, of concealing historic child sexual abuse in the 1970s. He has stepped aside from his duties but not resigned as archbishop.

In 2013, the Holy See recalled and defrocked its envoy to the Dominican Republic, Jozef Wesolowski, and ordered he be tried for child sex offences.

Wesolowski was found dead in 2015 before he could stand trial.

A man considered the Church’s third-ranked official, Vatican treasurer Cardinal George Pell, is due to go on trial in Australia on charges of historical sexual offences, which he denies.