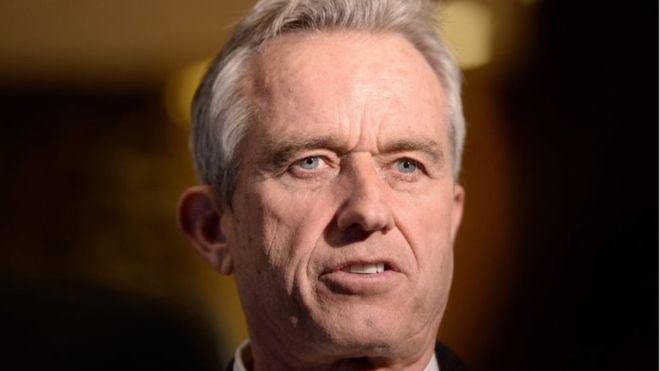 Mr Kennedy has questioned whether vaccines cause autism, a claim that has been widely debunked by medical professionals

Robert F Kennedy Jr, a leading voice in the anti-vaccine movement, says President-elect Donald Trump has asked him to chair a study on vaccine safety.

The eldest son of liberal icon Senator Robert Kennedy has long contended that some vaccines may cause autism, a claim that has been widely debunked.

The president-elect has also expressed doubt about vaccinations.

Mr Trump has previously tweeted about the issue, advocating for children to receive smaller doses of vaccines over a long period of time.

“I am totally in favour of vaccines,” Mr Trump said in a 2015 Republican primary debate.

“But I want smaller doses over a longer period of time. Same exact amount, but you take this little beautiful baby, and you pump – I mean, it looks just like it’s meant for a horse, not for a child, and we’ve had so many instances, people that work for me. … [in which] a child, a beautiful child went to have the vaccine, and came back and a week later had a tremendous fever, got very, very sick, now is autistic.”

Medical experts have overwhelmingly rejected any link between vaccines and autism, warning that promoting such a theory endangers public health.

The Centers for Disease Control and Prevention has found no connection between autism and vaccines, citing numerous studies.

The commission will focus on making “sure we have scientific integrity in the vaccine process for efficacy and safety effects,” Mr Kennedy told reporters after Tuesday’s meeting at Trump Tower in New York.

Mr Kennedy, an environmental activist who has focused his attention on the “anti-vax” movement, campaigns for parents to opt out of vaccinations and immunisations.

He came under fire in 2015 for describing the number of children injured by vaccines as “a holocaust” during a film screening of Trace Amounts, a documentary on the subject.

Mr Kennedy later apologised and said he “struggled to find an expression” to convey his thoughts.

Mr Trump and his team have yet to confirm news of Mr Kennedy’s new role.