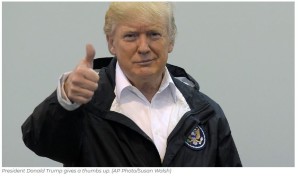 by Paul Bedard, published on The Washington Examiner, on January 9, 2018

bz: many already know that your utilities, among many other things are all, already pre-paid, per-authorized, pr-approved…. This DOT- is starting to show you some of that ; -)

On the heels of companies dishing bonuses of up to $3,000 to over one million workers due to the anticipated benefit of President Trump’s tax reform victory, several major utilities have announced plans to cut rates in a consumer payback related to the lower taxes.

Energy suppliers like Washington’s Pepco, Baltimore Gas and Light, Pacific Power, Rocky Mountain Power and Commonwealth Edison said they plan to give hundreds of thousands of customers a rate cut due to the tax reform.

The taxpayer advocate group Americans for Tax Reform is pulling together the list of utilities expected to apply for a rate cut as it has for more than 100 major firms planning to pay out bonuses, higher wages and increased benefits due to the expected windfall they plan to receive when corporate taxes are cut.

In one announcement typical of those from the utilities sharing their tax benefits, Pacific Power said, “The benefit of this tax cut should be passed on to our customers – and we will work with our regulators and stakeholders on the best way to do that.”

Baltimore Gas & Electric – the utility is passing on $82 million worth of tax savings, resulting in lower gas and electric bills for customers:

Today BGE will file with the Maryland Public Service Commission (PSC) to pass approximately $82 million in annual tax savings to customers, resulting from federal tax cost reductions. The Tax Cuts and Jobs Act, which decreased the corporate tax rate from 35 percent to 21 percent, was signed into law on Dec. 22, 2017 and became effective on Jan. 1, 2018. If approved by the PSC, the average BGE residential electric customer can expect to see an estimated $2.31 decrease on their monthly bill, and the average residential combined natural gas and electric customer can expect an estimated $4.27 monthly reduction, effective in February 2018.

Pacific Power – the utility will pass along tax savings to customers:

The new Republican tax plan has brought a variety of tax cuts. Pacific Power says they are committed to passing the benefit of this tax cut on to customers.

“We strive to provide our customers reliable service while keeping rates low,” said Stefan Bird, President and CEO of Pacific Power. “The benefit of this tax cut should be passed on to our customers – and we will work with our regulators and stakeholders on the best way to do that.” – Jan. 3, 2018 My Columbia Basin article excerpt

Pepco – the utility will pass along tax savings to customers:

Pepco today announced they will file with the Public Service Commission of the District of Columbia in early February, outlining plans to provide annual tax savings to more than 296,000 electric customers in the District of Columbia. If approved, Pepco would plan to begin providing a credit lowering customer bills starting in the first quarter of 2018.

The tax savings are the result of federal tax reductions under the new Tax Cuts and Jobs Act, which was signed into law on Dec. 22, 2017, and became effective on Jan. 1, 2018. The decrease in the Corporate Tax Rate from 35 percent to 21 percent reduces the amount of federal income tax Pepco will have to pay.

“The tax law will result in lower bills for our customers and lower taxes for Pepco,” said Dave Velazquez, President and CEO, Pepco Holdings, which includes Pepco. “We are pleased to provide these savings to our customers, while at the same time ensuring we are making prudent investments in the local power grid to maintain the safe, reliable, and affordable service our customers have come to expect.” – Jan. 5, 2018 Pepco press release

Rocky Mountain Power – the utility will pass along tax savings to customers:

Rocky Mountain Power says it plans to pass some of its federal tax savings on to customers. But, the company isn’t sure how much or when. – Jan. 4 Local News 8 article excerpt

Commonwealth Edison Company (ComEd) – the utility is passing on $200 million worth of tax savings to its customers:

Today ComEd is filing a petition with the Illinois Commerce Commission (ICC) seeking approval to pass along approximately $200 million in tax savings to its customers in 2018. If approved by the ICC, the average ComEd residential customer can expect to see an estimated $2-$3 decrease on their monthly bill related to the tax reduction.

The Tax Cuts and Jobs Act (TCJA), which was signed into law on Dec. 22, 2017 and became effective on Jan. 1, 2018, decreased the corporate tax rate from 35 percent to 21 percent, reducing the amount of federal income tax ComEd will have to pay. – Jan. 5 Commonwealth Edison Company press release

Paul Bedard, the Washington Examiner’s “Washington Secrets” columnist, can be contacted at pbedard@washingtonexaminer.com