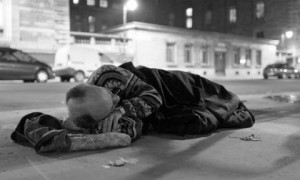 Earlier this month, Hawaii State representative Tom Bower (D) began walking the streets of his Waikiki district with a sledgehammer, and smashing shopping carts used by homeless people. “Disgusted” by the city’s chronic homelessness problem, Bower decided to take matters into his own hands — literally. He also took to rousing homeless people if he saw them sleeping at bus stops during the day.

Bower’s tactics were over the top, and so unpopular that he quickly declared “Mission accomplished,” and retired his sledgehammer. But Bower’s frustration with his city’s homelessness problem is just an extreme example of the frustration that has led cities to pass measures that effective deal with the homeless by criminalizing homelessness.

How did Utah accomplish this? Simple. Utah solved homelessness by giving people homes. In 2005, Utah figured out that the annual cost of E.R. visits and jail says for homeless people was about $16,670 per person, compared to $11,000 to provide each homeless person with an apartment and a social worker. So, the state began giving away apartments, with no strings attached. Each participant in Utah’s Housing First program also gets a caseworker to help them become self-sufficient, but the keep the apartment even if they fail. The program has been so successful that other states are hoping to achieve similar results with programs modeled on Utah’s.

It sounds like Utah borrowed a page from Homes Not Handcuffs, the 2009 report by The National Law Center on Homelessness & Poverty and The National Coalition for the Homeless. Using a 2004 survey and anecdotal evidence from activists, the report concluded that permanent housing for the homeless is cheaper than criminalization. Housing is not only more human, it’s economical.

This happened in a Republican state! Republicans in Congress would probably have required the homeless to take a drug test before getting an apartment, denied apartments to homeless people with criminal records, and evicted those who failed to become self-sufficient after five years or so. But Utah’s results show that even conservative states can solve problems like homelessness with decidedly progressive solutions.