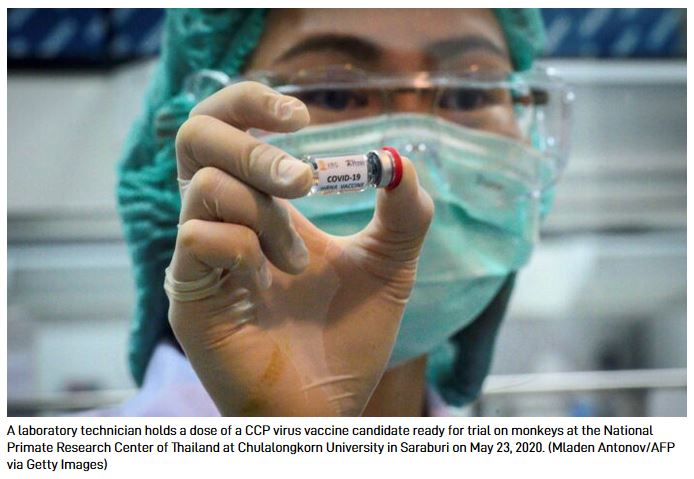 The United States will develop a CCP virus vaccine before any other country, a top U.S. official says.

“I think we’re going to develop a vaccine first,” national security adviser Robert O’Brien said during a May 25 interview on CBS News’ “Face the Nation.”

“I think we’re moving out very quickly on both therapies and a vaccine. We’re gonna make it available to the American people, and one of the things the president said is if we have a vaccine, we’re going to share it with the whole world.”

Chinese Communist Party (CCP) hackers have been trying to use espionage to gain access to crucial research into a vaccine, he added, noting China’s history of stealing intellectual property and technology. U.S. researchers are pushing ahead with the development of both vaccines and therapies regardless of China’s actions, O’Brien said.

The CCP virus, commonly known as the novel coronavirus and which emerged in China last year, causes the disease COVID-19.

Ten vaccines have entered human trials as of May 24, including several in the United States. The leading candidates appear to be an RNA-based vaccine developed by Massachusetts-based Moderna and a candidate developed by British researchers called AZD1222 that’s made from a weakened version of a common cold virus.

Dozens of others are in various stages of development, including testing in animals.

Vaccines typically take 5 to 15 years to develop. Scientists are racing to get vaccines for the CCP virus approved in less than a year.

Federal health officials recently hammered out a deal with the company that licensed AZD1222 that would see hundreds of millions of doses delivered to the United States as early as October. The U.S. government is providing up to $1.2 billion to the project.

About a dozen other vaccine candidates are receiving a boost from the United States as part of Operation Warp Speed, which aims to speed up development of the candidates’ vaccines.

Dr. Moncef Slaoui, the newly appointed “vaccine czar,” says he’s confident hundreds of millions of doses will be delivered by the end of this year, citing positive results from the trial of Moderna’s vaccine. Trump has also expressed confidence in that target.