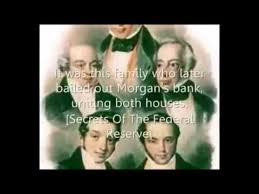 Is the Vatican behind the Mortgage mess?

“Ye are able upon earth to give and take away empires, kingdoms, principalities, marquisates, duchies, courtships, and the possessions of all men . . .” — Pope Gregory VII speaking of the papacy (1073).

The Vatican is the strongest push for banking anywhere in the world. When it comes to moving money, or not moving money, they are the Key.

Let’s take a moment to follow the “money” allegedly in your jeans.

Where do U.S. banks get their marching orders? From the Federal Reserve that is constantly in the news setting the interest rates that charge or cripple economies.

Often seen as a government agency, the “Fed” is actually a privately held, for profit bank that supposedly stands ready to make good on even the dodgiest loans made by U.S. banks that must hold in reserve only 10% of the money they loan.

This “fractional reserve banking” means banks can create mortgages and other loans out of thin air? [No! Promissory Notes*]. Another word for this is fraud.

In usurping the Constitution, which reserves the sole right to mint U.S. currency at zero interest, the illegal Federal Reserve Act passed during Congressional recess for Christmas in 1913 essentially enslaved Americans and their successive government under a mountain of compounding war debts before being exported as a model worldwide.

The Federal Reserve Act was created in London by Baron Alfred Rothschild. Its final draft was decided at a secret meeting of heavy financial hitters held at J.P. Morgan’s Jekyll Island estate in Georgia. Among those present were Senator Nelson Aldrich, Assistant Secretary of the Treasury, Paul Warburg, and several senior officials of J.P. Morgan’s banks. [Secrets of the Federal Reserves The Creature from Jekyll Island].

Hold on, advises G. Edward Griffin, author of the Creature From Jekyll Island. We had The Morgans; The Rockefellers; Kuhn, Loeb & Company; The Rothschilds; and the Warburgs. They were the major competitors in the field of investment and banking in those days; these were the giants.

Prior to this period they were beating their heads against each other, blood all over the battlefield, fighting for dominance in the financial markets of the world. And here they are sitting around a table coming to an agreement of some kind.What is going on here?

They came together completely and decided not to compete — They formed a cartel, to print money, collect taxes, and charge interest to the U.S. Government and other borrowing banks on loans made from nothing [No! Promissory Notes*].

With his extensive European banking savvy, Warburg was one of the more knowledgeable bankers in the group. Voicing the Jesuit agenda, this non-ordained “cohort” will later tell the Senate: “We shall have World Government, whether or not we like it. The only question is whether World Government will be achieved by conquest or consent.”

The main problem, as Paul Warburg informed his colleagues, was to avoid the name “Central Bank”. For that reason, he had decided upon the designation of “Federal Reserve System”. This would deceive the people.

This patent removal of the system from Congressional control meant that the Federal Reserve proposal was unconstitutional from its inception.

And Morgan? John Pierpoint Morgan was born in 1837 during the first money panic in the United States, said to have been caused by the House of Rothschild. It was this family who later bailed out Morgan’s bank, uniting both houses. [Secrets of the Federal Reserve].

By June 1932, Congressman Louis McFadden was fed up with the Fed: “We have in this country one of the most corrupt institutions the world has ever known. I refer to the Federal Reserve Board and the Federal Reserve Banks . . . private credit monopolies which prey upon the people of the United States for the benefit of themselves.”

The Chair of the House Committee on Banking and Currency told the House of Representatives: “The United States has been ransacked and pillaged . . . The truth is the Federal Reserve Board has usurped the Government of the United States. It controls everything to supply financial power to an international super state — a superstate controlled by international bankers and international industrialists acting together to enslave the world.

Meeting in private with the presidents of the 12 Federal Reserve Banks, the Federal Reserve Board of Governors controls all economic activity throughout the United States, creating money out of nothing [No! Promissory Notes*] and manipulating money markets and employment by setting interest rates for the billions of dollars in government bonds floated daily to keep a seriously bankrupt economy afloat.

Those dollars in your wallet are actually “Federal Reserve Notes”. These “promises to pay” are not “money”. Regardless of denomination, each bill printed by the Bureau of Printing and Engraving in D.C., on contract from the privately held Federal Reserve, is actually worth exactly three-tenths of one penny. No wonder the Fed’s founder Nathan Rothschild, once boasted: “Permit me to issue and control the money of a nation, and I care not who makes the laws.”

The privately printed thousand dollar bills streaming in sheets off the presses become “liabilities and obligations” of the United States Government, and are added to its present [$19] trillion dollar debt. The government had no debt when the Federal Reserve Act was passed in 1913.” [Secrets of the Federal Reserve].

In case you are wondering, the never properly ratified U.S. Income Tax was also introduced by busy bankers in 1913 as the only means to finance the war and ensure perpetual profits from providing public and corporate debt.

The U.S. “Federal Income Tax” is not “federal” either. According to attorney, author and federal witness, Paul Andrew Mitchell: “After much diligent research, several investigators have concluded that there is no known Act of Congress, nor any Executive Order, giving the IRS lawful jurisdiction to operate within any of the 50 States of the Union. When all evidence is examined objectively, the IRS appears to be a money laundering extortion racket, and conspiracy to engage in a pattern of racketeering activity in violation of 18 U.S.C. 1951 and 1961, et seq.

In other words, it is an organized crime syndicate operating under false and fraudulent pretenses. As Eustace Mullins helpfully explains: “The IRS is actually a private collection agency for the Federal Reserve System. It originated as the Black Hand in medieval Italy, collectors of debt by force and extortion for the ruling Italian mob families.

All personal income taxes collected by the IRS are rrquired by law to be deposited in the nearest Federal Reserve Bank. In other words, into the pockets of the Rothschilds, Warburgs, Schiffs, Rockefellers, Harrimans, Morgans, and other elite families. But don’t try to buy any of this hot Fed stock. The Federal Reserve Act stipulates that the stock of the Federal Reserve Banks cannot be bought or sold on any stock exchange.

It is passed only by inheritance as the fortune of the “big rich”; Mullins states “Almost half of the owners of Federal Reserve Bank stock are not Americans.” These “foreign” owners include the Fed’s originators, the Vatican Jesuits.

“In a country where there are Jesuits, they must either rule or the country must go to ruin… it is they who rule the world.” — Luigi Desanctis, official Censer of the Inquisition, Protestant Reformation pastor (1852).

The Great Depression put all the smaller banks out of business and made the Federal Reserve Bank “Lord of all:” — Eric Phelps documents.

Guess who helped trigger the Great Depression? According to FDR’s son-in-law, it was a Knight of Malta named Joseph Kennedy. As Curtis Dall relates: “The feeling around the Street, in succeeding months, was that there were, in particular, three large short sells of stock, allegedly, Tom Bragg, Ben Smith, and Joe Kennedy. Of the three mentioned well-known short sellers, Joe Kennedy was allegedly the most important, the most powerful and the most successful… Was Joe Kennedy carefully selected by world money leaders to sell short? Today the largest bank in the world today, the Federal Reserve “is one of the greatest contributors, or players, in international trading” Mullins observes.

The Fed gets its orders from the Queen Mum of all Banks, the Bank of England — aka, the Bank of Rothschild considered by many to be the world’s most powerful institution. The power behind all presidencies, dictatorships, and thrones.

Does the Bank of England answer to any other bank? Well, yes, actually. The Bank of Rome began opening branch offices in Venice in 1587.

Bank of Rome = Vatican Bank controlled by the Jesuit General, aka the “Black Pope”.

The Jesuit Bank of Rome opened its Bank of England branch in 1694. The first bank to be named after a country, the Bank of England has nothing to do with the British Government — except to own it through privately held, interest-compounded debt.

Unaccountable to either the Queen or Parliament, the misleadingly labeled “Bank of England” finances the throne, the British prime minister, Parliament and much of the planet out of “The City” located in central London. All major British banks have their main offices in this “Square Mile” — as well as 70 U.S. Banks. Throw in the London Stock Exchange, Lloyds of London, the Baltic Exchange (shipping), Fleet Street (publishing and Newspapers), the London Commodity and Metal exchanges and you are looking at Earth’s financial axis. [Descent into Slavery].

The City operates as a sovereign state, just like the Vatican. Since 1820, the Rothschilds have traditionally chosen The City’s Lord Mayor.

Back in the U.S.A., as author Eric Phelps explained in an interview just before publication of his secrecy-shredding “Vatican Assassins”. The Vatican’s Black Robes “own and control” the Federal Reserve Bank “by proxy” through the Knights of Malta, with their various trusts and so on. They never own anything outright; they always own it through a trusted third party including the Vatican home mortgage connection.

All Roads lead to Rome.

Anonymous: “And then they want you to respect them. Respect their religion. Religion is not to be respected. You uncover the truth. You say the truth no matter what.”

*Bank Credit is exchanged for Promissory Notes. [The real owner of the promissory note creates the credit and mistakenly GIVES it to the bank, in return for a bank deposit or bank check].