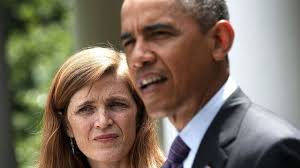 Former U.S. Ambassador to the United Nations Samantha Power may share an unflattering stage with a text-loving FBI agent and his Donald Trump-hating paramour from the bureau.

Fired agent Peter Strzok and ex-FBI lawyer Lisa Page are infamous today for texting on FBI phones their anti-Trump sentiments while allegedly having an affair. They played key roles in the now-debunked Russia collusion investigation.

It turns out that Power — the diplomat whose authority inexplicably was used to unmask hundreds of Americans’ names in secret intelligence reports during the 2016 election — engaged in similar Trump-bashing on her official government email, according to documents unearthed by an American Center for Law and Justice lawsuit. The conservative legal group is run by Trump defense attorney Jay Sekulow.

The discovery could add a new dimension — a question of political bias — to a long-running congressional investigation into why Power’s authority was used to unmask hundreds of Americans’ names in secret National Security Agency intercepts during the 2016 election. That practice of unmasking continues to grow today.

Power’s barbs toward Trump started as early as the GOP primaries, when she used her email to connect Oskar Eustis, the artistic director at the Public Theater in New York, with oft-quoted think tank scholar Norman Ornstein, the memos show.

“Oskar, Norm will explain our political system, in a way that will fleetingly make it seem rational, though maybe not after Trump and Sanders win NH,” she wrote, predicting the future president and upstart socialist Sen. Bernie Sanders (I-Vt.) would win the esteemed New Hampshire primary.

After Trump stunned the world with his general election win over Hillary Clinton, the observations of Power and those emailing her on her official government account turned more vitriolic.

“I am discouraged and frightened. Electing a right-wing president is something, but such a morally repugnant bully!” read a Nov. 14, 2016, email to Power from a sender whose name the State Department redacted for privacy reasons. The email referred to former Trump strategist Stephen Bannon as “an avowed racist” and predicted, “The worst is coming.”

There is no evidence in the released documents that Power responded or chastised the sender for using government email for such political animosity.

But there is ample evidence she engaged in similar Trump-bashing.

In December 2016, for example, when sent a news story about Trump’s effort to communicate a new policy direction for the U.N., Power snarkily replied: “This reflects the lack of understanding of history.”

When Trump announced his intent to withdraw the U.S. from a global climate deal, Power emailed a colleague: “Lord help us all.”

And when a routine diplomatic issue with Japan arose in late November 2016, Power emailed another colleague: “It is unreal how the Trump dynamic has changed things.”

Perhaps most telling are Power’s efforts to arrange media interviews and speeches during her final days in office, clearly aiming to counter the incoming president’s agenda and fan the narrative that Trump might be dangerously soft on matters involving Russia and mercilessly hard on immigrants.

When Jorge Ramos, news anchor for the Spanish-language network Univision, floated an idea for an exit interview, Power suggested her anguish at seeing Democrats lose the election was receding the more she watched Trump in action.

“If we do something, we will make it good,” Power wrote Ramos. “PTSD in retreat — Trump has vanquished it.”

Power and her staff spent time brainstorming a possible CBS “60 Minutes” interview as Trump’s transition period began. The idea was to parlay Power’s remarks at an upcoming citizenship event and the TV news magazine interview into forums to shame the president-elect on immigration.

“Ambassador: Have a draft for your remarks for the naturalization ceremony on Tuesday, which has proven a useful and somewhat cathartic vessel to channel some post-Trump messages about who we are,” fellow State Department official Nikolaus Steinberg wrote on Nov. 11, 2016.

Power responded: “Need to move out on 60 mins idea to seek maximum amplif.”

Soon, CBS’s Bill Owens, then executive editor of “60 Minutes,” and Power’s staff exchanged a series of emails about how a prospective interview could include the Syrian refugee crisis to focus attention on Trump’s immigration stance.

“We think they might still be interested because this shows the flip side of the story, how refugees are actually contributing to American communities, with the hook being the foreshadowing that Trump and Company may try to undo all this,” Steinberg wrote Power.

She responded, “Yes, unfortunately. Will see what else I can put up w.”

Owens replied a few days later that perhaps they could discuss the interview after the Thanksgiving holiday. “I can only imagine the conversations you are having with some of our allies now and I would love a chance to brainstorm,” he wrote.

At first blush, the Power emails may seem to be nothing more than political screeds from government elitists exhibiting their disbelief that America elected Trump. But the president’s defenders and congressional investigators see reason for concern.

“The sheer political panic evidenced in Samantha Power’s emails shows that ‘the fix was in’ against the incoming administration even before the 45th president was sworn into office,” said Sekulow, one of Trump’s lawyers and founder of the center that successfully sued to obtain the documents.

One thing clear from Power’s emails is an effort to turn a burgeoning Russia scandal against Trump during her final days in office.

For example, when a reporter emailed that he was working on a story advancing the Trump-Russia collusion theory, she asked Barack Obama’s deputy national security adviser, Ben Rhodes, to assist. “Sounds serious. Can you follow up, Ben?” she emailed.

And on Jan. 17, 2017, three days before she and Obama left office, Power worked into the wee hours of the morning to make her final speech, one that would warn Trump might have the wrong formula for addressing Russia aggression.

“Trump’s interviews over the weekend with the foreign press questioning R sanctions and the value of NATO will be helpful for relevance of speech,” Steinberg wrote Power.

Power’s final draft of the speech obliged, suggesting it was “flawed” for Trump to think he could “put recent transgressions aside and announce another reset with Russia,” and that “easing sanctions” would be a mistake. She took aim at Trump’s credibility with one of his own favorite lines, writing: “Making up fake news — ask the reporters here today — is a lot easier than reporting the facts.”

Rep. Mark Meadows (R-N.C.), a member of the House Oversight and Reform Committee, told me that the emails’ expressed bias and the use of government speeches, interviews and events to counter Trump might warrant an investigation into whether any conduct violated the Hatch Act’s prohibition on engaging in political activities on government time.

But the most important impact of the emails may lie in the ongoing investigation into the Obama administration’s unmasking of American names in secret foreign intelligence reports.

Congressional investigators confirmed more than two years ago that there was a massive spike between 2014 and 2016 in the number of names Obama officials asked be unmasked, including dozens involving Trump campaign and transition officials.

Though Power’s U.N. job did not have regular intelligence-gathering responsibilities, her name was invoked as the authority for unmasking hundreds of American names in 2016 — averaging more than one American name per day, the investigation found.

When Power was questioned last summer, she gave congressional investigators an unsettling answer: She claimed that she did not specifically request many of the unmaskings and that other government officials must have used her name as a justification.

Multiple congressional investigations continue to pursue how and why those unmaskings occurred, and whether any led to damaging leaks such as the January 2017 publication of secret intercepts between Russia’s ambassador and then-Trump national security adviser Mike Flynn.

Power’s obvious anti-Trump predisposition in the emails raises questions about a political motive for the unmaskings done under her authority, several congressional investigators told me.

The truth is, neither political party has done a good job of resolving the troubling question of why thousands of Americans’ names are unmasked each year when they are incidentally intercepted by the National Security Agency during overseas phone calls.

The redacting, or masking, of names — known as minimization — is supposed to protect those Americans’ privacy from unlawful intrusion under the Constitution’s Fourth Amendment, and U.S. officials are supposed to have a compelling reason for requesting an unmasking.

In her congressional testimony last year, Power did not provide a compelling reason for the hundreds of unmaskings done in her name. And each time a U.S. official unmasks a name, he or she essentially is overruling an intelligence professional’s assessment that there wasn’t a national security reason to violate that American’s privacy.

While lawmakers in both political parties bicker over unmasking, the practice has ticked up under Trump. The Office of the Director of National Intelligence tells me that in fiscal 2018, unmasked names rose nearly 70 percent to 16,721, compared to 9,529 in 2017.

Bias or no bias, Americans deserve an answer to the question of why privacy-busting unmasking has become so widespread.

John Solomon is an award-winning investigative journalist whose work over the years has exposed U.S. and FBI intelligence failures before the Sept. 11 attacks, federal scientists’ misuse of foster children and veterans in drug experiments, and numerous cases of political corruption. He serves as an investigative columnist and executive vice president for video at The Hill. Follow him on Twitter @jsolomonReports.