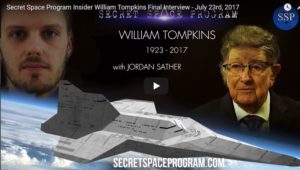 As a young boy, William Tompkins’s photographic memory nearly landed him in hot water with the Navy when they found his publicly displayed models of Navy ships included specifications that were top secret. However, when the Navy found that it wasn’t a spy who made these models, but young Tompkins, they took interest in his capabilities and recruited him into their Navy Intelligence to work on classified programs.

From 1942 to 1946 while in Naval Intelligence, Tompkins was a part of a top secret espionage program where he would debrief Naval spies that were embedded on German secret aerospace programs, and disseminate the advanced information he was receiving to corporations and research centers around America. After the Navy, Tompkins worked within highly classified think tanks designing advanced weapons for aerospace companies, including North American Aviation, Northrop and Douglas Aircraft Company. He came forward late in his life to disclose all he knew about extraterrestrials on our planet and secret space programs operated in secret by our very own government. Find information related to Tompkins and more @ https://www.secretspaceprogram.com/