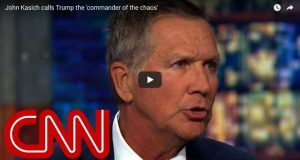 “John Kasic calls Trump the ‘commander of the chaos'”
the real mic drop moment, which no one on show reacted to John’s “slip”… which came at 5 minute mark in a 7:05 minute clip..

He is talking about the chaos of trump… and then says

“The other thing is when you look at the congress, though. it’s like 24 hours, since, John McCain was put to Death, and look at this circus of a hearing that’s going on” camera is in tight on John, can’t see Cuomo, probably a good thing as he is probably apoplectic. John takes 3 beats, no change in facial expression and then goes to “his given message”…