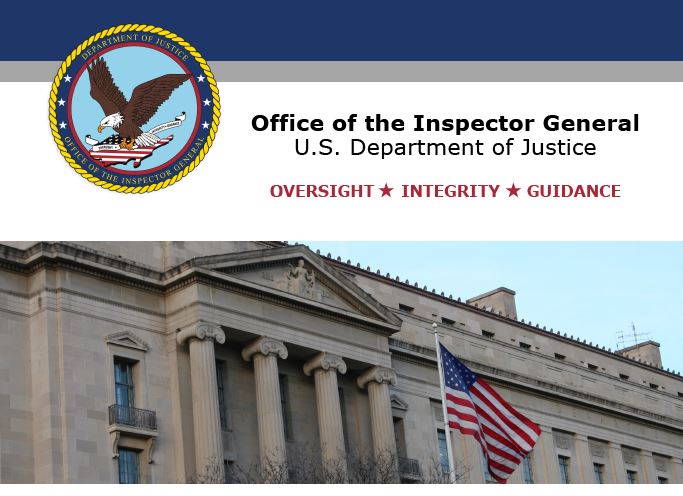 Cover of OIG report “Federal Bureau of Prisons’ Management of Its Female Inmate Population” Respectfully There is NO Oversight, ZERO Integrity, We The People Give You Guidance on The Damnable and Horrifying conditions Female prisoners are subject to. ~ BZ Riger@IUVPORTAL on behalf of Heather Ann Tucci-Jarraf, Carissa Carpenter, Julia Teryaeva-Reed … thousands of others.

This I UV Blog post has been @ tweeted to  @realDonaldTrump, @TheJusticeDept, @hannabogorowski, @JusticeOIG

BZ: I received this email from Heather this morning, its her response to an article I sent her on the OIG report.

Thank you to everyone that sent me this article <3

I make the following FEW (of many) comments/notes/highlights/overlights, with these two points in heart:
1. What you sent me for review is an article; and, link to article sent
2. I have not viewed the OIG report that is the point of topic in said article. [attempting again to send her the contents of OIG reports- BZ]

The points that the article cover regarding the conditions and treatment of ONLY female inmates, are the tamest points that femal inmates experience…and if the general public actually saw, knew, or experienced the totality of what female inmates do, the penal systems in America would not exist, and answers would be demanded from the DOJ as to the human rights abuses they allow, encourage, and “policy” to be practiced in said facilities.

“Damnable” and “horrifying”, in my professional opinion and experiences, are tame words to use to describe the conditions and treatments inflicted on female inmates in the penal systems operating in America. What is most concerning is there is no true recourse or remedy for any of the female inmates while they are in custody, and no effective assistance possible from their attorneys, if they even have one…and by some accounts, those factors and more, have fatal results…and by many accounts, permanently crippling results.

From informed experience and investigations, many men and women that are in the penal systems, should not be there. There are more instances than I care to recall, where “criminal procedures”, “criminal process”, and “due process” were not followed, not even a little bit…where those thought to have been delegated authority to enforce “laws”, could not even follow said “laws” themselves, and with the most heinous flair. Couple that with the infamous “shame and shun” societal programming when the purported “inmates” are released, which “China” has now taken beyond extremes, and you have guaranteed infite market for “prison bonds”.

Are there situations where measures must be taken to keep all beings safe and protected…yes, for the here and now…however, the situations are manufactured at the highest levels, and inherent in the very systems and the manner of application of said systems the people use daily…coupled with an unaware populous…and corrupt enforcement…I could speak for weeks on that topic alone…and I will leave it until the appropriate moment and forum.

During this operation, I had to bite my tongue from gushing forth apologies, and blink my eyes repeatedly to stop the tears for all that was experienced by ALL purported inmates.

OIG report "Female Inmate Population" Respectfully There is NO Oversight, ZERO Integrity, We The People Give YOU Guidance on The Damnable and Horrifying conditions . @realDonaldTrump, @TheJusticeDept, @hannabogorowski, @JusticeOIG pic.twitter.com/rkY7t8aiH9