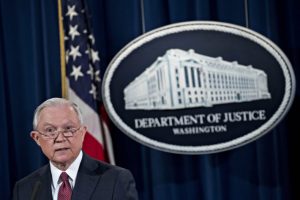 Attorney General Jeff Sessions today issued litigation guidelines to aid Department of Justice attorneys involved in litigation challenging a federal government program, regulation, order, or law. The litigation guidelines will arm Department litigators handling these cases to present strong and consistent arguments in court against the issuance of nationwide injunctions and to reaffirm the existing constitutional and practical limitations on the authority of judges. The Department opposes the issuance of nationwide injunctions, consistent with the longstanding position of the Executive Branch under previous Administrations from both parties.

Nationwide injunctions—sometimes called “non-party injunctions”—prevent the federal government from enforcing an Executive Branch law or policy as to any person or organization, across the entire United States, regardless of whether such broad injunctions are necessary to provide relief to the specific plaintiffs involved in the case. In effect, they allow a single unelected federal district judge to set or veto a national policy. The increase in the number of nationwide injunctions in recent years, across Administrations of both parties, highlights the problem of judges acting outside of the bounds of their authority to grant relief to people or organizations that extends beyond the particulars of a specific case.

“Increasingly, we are seeing individual federal district judges go beyond the parties before the court to give injunctions or orders that block the entire federal government from enforcing a law or policy throughout the country. This kind of judicial activism did not happen a single time in our first 175 years as a nation, but it has become common in recent years. It has happened to the Trump administration 25 times in less than two years. This trend must stop. We have a government to run. The Constitution does not grant to a single district judge the power to veto executive branch actions with respect to parties not before the court. Nor does it provide the judiciary with authority to conduct oversight of or review policy of the executive branch. These abuses of judicial power are contrary to law, and with these new guidelines, this Department is going to continue to fight them.”

In a recent speech to the Eight Circuit Judicial Conference, the Attorney General stressed that the use of nationwide injunctions threatens the rule of law. The Attorney General also emphasized how nationwide injunctions are a danger to our constitutional order in a March op-ed (link is external). The litigation guidelines published today will strengthen the Department’s efforts to help restore order, boundaries, and common sense to the U.S. judicial system.