Many people have asked about the documents that Heather spoke about two months ago, specifically the documents that will outline the current financial system and how it works vs the “New” financial system (ie: the Universal Value Exchange System) and I Value.   Over the course of the past couple of months more and more information, intel, and absolute data has become available on this.  Each step of the process of has become very clear- to the point of extreme clarity- and as each piece of the puzzle makes itself visible the documents are edited and changed to reflect that information.

Several months ago the following patent was made visible- and we’re pretty sure it was back-dated to cover their asses.  Since then a huge amount of data has been released.  Here’s the thing:  Even with all the shenanigans that are constantly going on within the corporate governments, the world of finance, industries like big pharma and big oil, etc…. they HAVE to be transparent in some way, shape or form.  They MUST make it known and available to the public to know what they are doing.  Of course, they don’t actually want you to KNOW what they are doing, so these pieces of information and data are hidden in ways that are not apparent, with no fanfare or sign posts to direct you to the information, and the information is many times hidden behind elusive language and wording that is not easily understood. So finding the information takes a lot of digging in places like the UCC, the Patent offices, various government agencies, etc…. Not easy to say the least.  The other place that you can find them outing various information they need to make public is, believe it or not, Wikipedia!  They do an amazing job of hiding in plain sight pieces of the information puzzle in such a way that the vast majority of the public wouldn’t connect any dots at all.
…. unless you happen to know what dots to look for  ;>)

Today I am posting the patent that has been put forward by VISA (yes, the credit card company) for the “Universal Value Exchange”….. sounds familiar, eh?

……. I do love it when they make it absolutely transparent and blatantly show what it is that they are planning.   The “Universal Value Exchange”……  “Universal” is pretty damn straight up in your face and crystal clear.  The words that I LOVE though are “VALUE” and “EXCHANGE”… ’cause you know…. we’ve been talking about exchanging Value all year!!  I have to wonder if they’ve thought about just how much information they’ve released just with the name of their new system alone, eh?

Below is the original patent filing.  Under that is a blow up of the little tiny diagram they have in the document- and THIS is the most enlightening part of the whole document to me as I’m a very visually oriented person.  So, start with looking through the patent for the Universal Value Exchange, then we’ll take a good look at the diagram and I’ll illuminate some very important points in the diagram. ….

The diagram above here is taken directly from the Patent filed with the WIPO HERE .  For the sake of clarity and the fact that I’m a bit of a neat freak when it comes to stuff like this, I’ve cleaned up the diagram- edited my own nice neat headings etc….  as you can see that the original doesn’t size up very well from the document.

The next diagram – and all the ones that follow in this article, were created by myself to give a visual image of my opinions of what these represent and what is currently happening.

This diagram above is my representation of the Current Financial System and is based on the diagram in the patent for the UVE.  Take a close look between the two diagrams- of the Universal Value Exchange and of the Current Financial System.  The first thing I want to point out- as it’s the most major piece of the puzzle is that the UVE diagram has arrows from the man figure- one to the bank and one to the exchange (and we’ll get into more details of exactly what this “exchange” is in a bit) and the word written below that arrow is “Optional”.  Therein lies one of the major differences between the current system- which you notice doesn’t have anything “optional” anywhere- and the UVE system:

The dotted line boxes around the Exchange and Bank squares are also an indication of change, because by using the dotted line, they are giving you a choice.

Looking and the diagram of the Current Financial System you can see that there are no options, no choices to be made….. you are dealing with a closed system.  The pieces that are in grey are the parts that they don’t tell you about, ie: that YOU are the Value, and that the controller of the Currently Financial System is STILL the Universal Value Exchange system!!!!  They just dropped out the upper box into the lower box in the middle of the UVE so that you’d think that it’s a “New” financial system!!  Same girl, Different party dress, to quote Heather, lol.

Here is my “interpretation” of the patents UVE diagram…. with the missing component drawn in, in grey:

They don’t tell you that YOU are the VALUE- which of course is the really big biggie- and they don’t tell you about where your value is going, ie: who the real “controllers” are, and where exactly they are located!!!

I don’t know about you, but I have a serious problem with both of these points.

Don’t you find the word “Merchant” and interesting choice of words?

So if assigning your Value over to the banks and exchange traded funds (not that they actually tell you about them either) is an “Option”, does that mean that you can deal directly with the Universal Value Exchange Controller?

How about those guys really running the show way up there….. can you deal directly with them?

Can we skip over all the middlemen and the brokers and the bankers and the “Controllers” and just deal directly with User 1 01b? 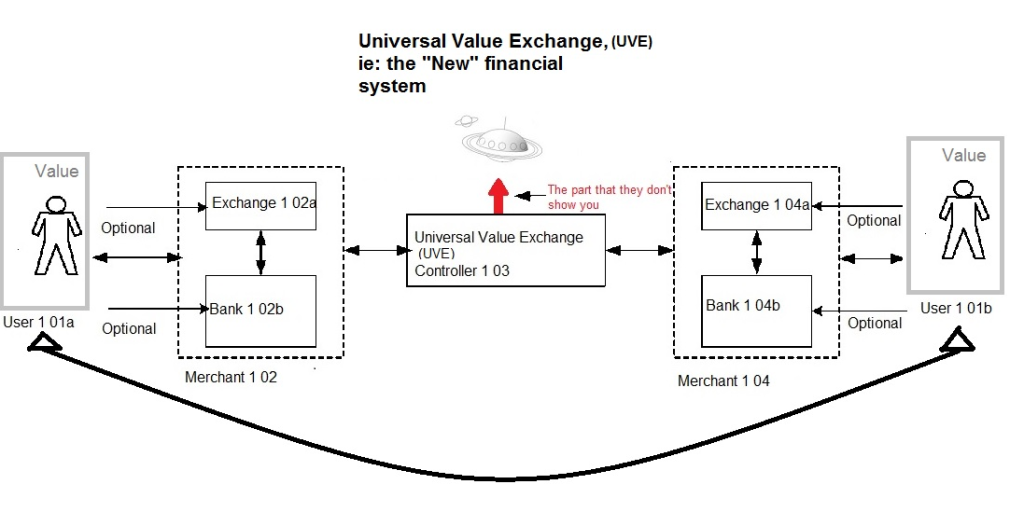 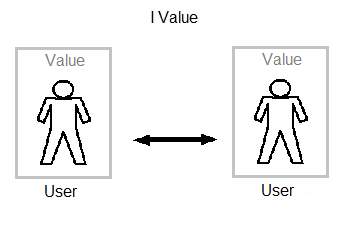 So for tonight, I will leave you with the homework of reading all this very interesting patent information on the “Universal Value Exchange”, and I will ask you to think about these two questions, and come up with the answer that resonates with YOU.

Would you rather exchange your Value within THIS system: 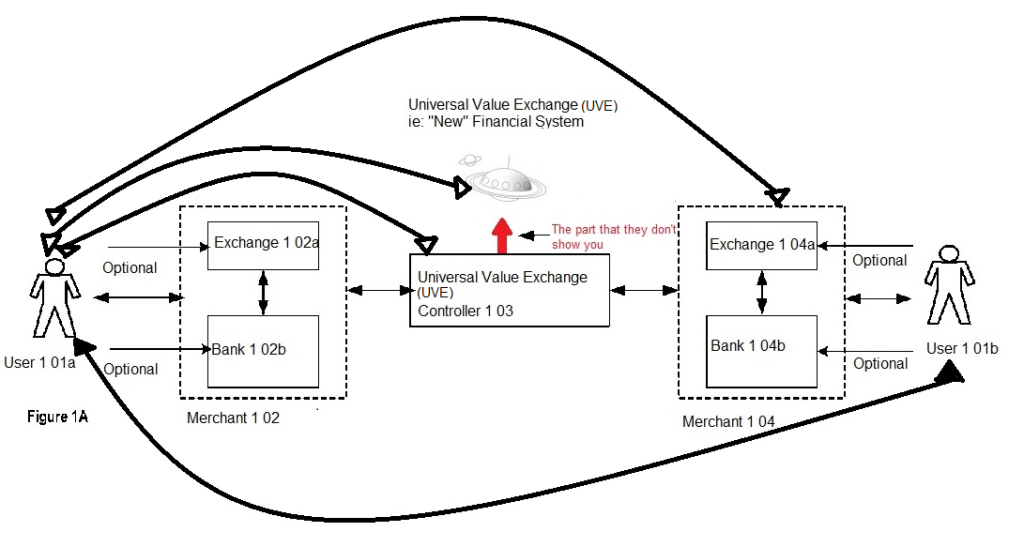 …. Or would you rather exchange your value this way:

OH!  And by the way, you might find this definition interesting in light of everything we’ve been discussing for the past 9 months: