Unexplained Deaths Continue to Rock the Health World… So Why Aren’t Officials Connecting the Dots?

Unexplained Deaths Continue to Rock the Health World… So Why Aren’t Officials Connecting the Dots?

By Andy Whiteley, published on Wake Up World, September 14, 2015 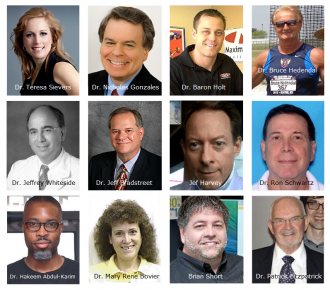 Over the past several months, there has been a series of at least 11 unexplained deaths and disappearances of holistic physicians and health practitioners in the United States. These deaths include Dr. Nicholas Gonzalez, a renowned holistic medical doctor who specialized in holistic cancer treatment, Dr. Jeff Bradstreet, a leading autism researcher and physician, and Teresa Sievers MD, an Integrative Medicine practitioner who operated Florida’s Restorative Health and Healing Center.

Last week, further news surfaced of the poisoning of 29 holistic doctors and homeopathic practitioners with a controlled substance, 2C-E, during a professional conference near Hamburg, Germany. (Despite Snopes.com‘s claims of “debunking” this story, German news networks Der Spiegel and Northern German Broadcasting (NDR) have confirmed these facts.)

And now, this disturbing trend continues with the shooting death of Brian Short, the founder of popular health website AllNurses.com, and his entire family at their home in Greenwood, Minnesota.

Although officials are treating each instance of murder or disappearance separately, this series of “co-incidental” deaths among health practitioners and holistic physicians has raised many concerns among the alternative news community.

The Death of Brian Short

Reports Yahoo.com: “The founder of a social networking service for nurses used a shotgun to kill his wife and three children before turning the gun on himself, police said Saturday after the release of autopsy reports… Investigators believe Brian Short killed his wife, Karen, and their three teenage children in their Greenwood home late Monday or early Tuesday, Mike Siitari, the interim chief of the South Lake Minnetonka’s police department, told The Associated Press.”

While the Short family deaths are being treated by mainstream media as a closed murder suicide case, the South Lake Minnetonka Police Department, however, has not concluded its investigations.

According to a report from the Star Tribune: “Investigators estimated that the deaths occurred late Monday night or early Tuesday morning and said they had not determined a motive in the killings.”

Says interim police chief Mike Siitari: “There are many moving parts in an investigation of this magnitude. I once again ask for the media’s and public’s patience while we work through all of the evidence and facts.”

Are the “moving parts” more complex than officials care to admit?

Considering the apparent coincidence of these many unexplained deaths and disappearances, detailed below, many in the health and holistic care communities are asking the question: Are health practitioners under attack? However it seems officials are taking the more reductionist view, choosing instead to view each instance as entirely unrelated. This of course raises the further question: Why are officials so unwilling to acknowledge the obvious?

This spate of deaths, largely within the holistic health arena, undeniably demands far more consideration, as indeed does the death of Mr. Short, who provided a popular networking platform for nurses working within the ailing healthcare system.

As noted by Heavy.com, there were no obvious signs the trouble at the Short home.

“Nothing in Brian Short’s Facebook page hinted that there were any problems. In fact, friends, neighbors, and family members thought the family was happy. Brian and Karen seemed like a happy couple who were always together, [as] People Magazine reported. They hosted parties at their home, but seemed unpretentious, according to friends. Brian seemed to be happy and smiling all the time. Some people question the entire murder-suicide story and wonder if there’s more to the case than the police have stated.”

According to the Star Tribune:

“They seemed like a great family… Everything was perfect.”

Sold in September 2011 for $2 million to the Shorts… the family moved to the 5,600-square-foot mansion, with an eight-car garage and a panoramic view of St. Albans Bay, from a 4,200-square-foot house in Lakeville.

He was facing a federal lawsuit from a New Jersey-based company… [after] AllNurses.com failed to delete anonymous defamatory comments from its website… although it is unclear whether it posed much of a legal or financial threat to his business…

There is some speculation within mainstream media that the potential financial implication of a lawsuit against AllNurses.com must have driven Short to commit murder/suicide, and this is really the only potential motive being seriously considered by investigators. However, as the founder of a website that receives over 4 million unique visitors per month, Short had received offers from numerous companies to buy AllNurses.com over the years, as he detailed in a 2014 interview with the Star Tribune:

I’ve been offered 50 buyouts in the last 10 years. I’ve turned them all down. I have so many ideas that I want to enable. At some point maybe I’ll sell — I have no interest in that now. I get a lot of satisfaction knowing that I’ve had an impact on nursing. It’s a very fulfilling career.

With lucrative buyout opportunities available, a reasonable person must wonder: If Short was facing financial troubles so dire as to drive him to murder suicide, why would he not have just sold the business? Or his $2 million mansion?

Furthermore, Yahoo News also reported that “all evidence indicates Brian Short killed his family members in their bedrooms before turning the gun on himself”. However as Short is alleged to have killed 4 family members, such a scenario would therefore require each of them to have remained stationary in their individual bedrooms, paying no attention to the sound of a shotgun going off multiple times in their home. It also requires Mr. Short to have turned a shotgun — a long weapon that fires from the shoulder — on himself.

Clearly, something doesn’t add up here.

With no clear motives or background that might explain this, or indeed any of these mysterious deaths and disappearances, why are officials so intent on ignoring the broader context of these killings? In the course of several months, no less than 11 prominent names in the health community have been killed or disappeared, many of them controversial to the mainstream health establishment, and many under highly suspicious circumstances. For example:

Such a series of events within any specific industry would ordinarily be treated as highly suspicious by officials, or even investigated as potential serial killing. However it is only the ‘alternative’ (I hate that word) media that is even acknowledging these coincidences, much less taking this context into serious consideration.

It’s time we know why.

Further demonstrating the culture of criminality among the pharmaceutical health industry, testimony in an Australian class-action case revealed emails between Merck employees seeking to “neutralize” and “discredit” doctors who criticized the highly profitable drug Vioxx (which was withdrawn from the market after it was proven to cause heart attacks, strokes and death.) One email between Merck employees said:

The court was told James Fries, professor of Medicine at Stanford University, wrote to the head of Merck in October 2000 complaining about the harassment members of his team who had criticized the drug received from Merck agents.

When this culture is viewed in context, even the least conspiracy-minded among us must soon begin to wonder: Are these recent deaths the acts of crony corporatists trying to silence the prominent voices of natural and progressive health solutions? Or voices of dissent among their ranks?

At the time of writing, investigators into the death of the Short family are unavailable to comment.

If there is foul-play behind these apparent coincidences, you can bet officials are never going to solve these crimes, and it is only through public awareness and diligence that the dots will ever be connected.

Please inform yourself of the history of recent deaths (listed below) and share this article with as many people as you can. We will continue to make public any details that come to hand.

My deepest condolences to the families who lost their loved ones. And to our friends and colleagues in the natural health arena, please take care of yourselves. We need you now more than ever.

To your health,
Andy