U.S. Ally Cuts Off Communications with Obama and Seeks New Trade Outside Dollar 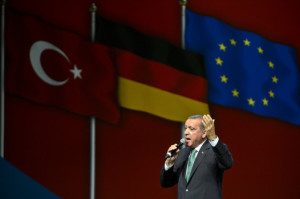 U.S. Ally Cuts Off Communications with Obama and Seeks New Trade Outside Dollar

On July 21, Turkish Prime Minister Tayyip Erdogan spoke in an interview with Turkey‘s ATV television, and confirmed that his office had cut off direct communications with President Obama, and in fact, were no longer even answering calls received from the White House. In addition to this startling announcement regarding a long standing U.S. ally, the Russian Ministry of Economic Development followed this up with a press release that stated that Turkey was quickly moving away from their reliance on the dollar as the global reserve currency, and is seeking increased trade with Russia in a mutually beneficial exchange of self-contained sovereign currencies.

Turkey’s cold shoulder against President Obama and the U.S. began shortly after the Syrian crisis failure by the United States back in September of 2013. And since that time, Turkey has begun to move away from its U.S. alliance and has started seeking increased trade agreements with America’s primary adversary Russia. Already the eighth ranked trading partner for Russia, Turkey is proposing an even greater share of this pie, and is willing to accede to Russia and China’s agenda for a de-dollarized trade system that cuts out the reserve currency from most or all transactions.

In 2013, the volume of trade between the countries amounted to 32.7 billion dollars. Russia is the second (after the EU) among foreign trade partners of Turkey, and Turkey – the eighth largest trade partner of Russia.

Minister Alexei Ulyukayev said that last year 4.5% drop was recorded in the Russian-Turkish trade. This is largely due to the unfavorable global economic environment. However, in January-May this year compared to the same period last year, turnover grew by 0.6%, which was due to increased deliveries of Russian exports. “Our task is to make every effort to save the positive dynamics of bilateral trade,” – said the Minister.

As one of the measures to stimulate the development of trade and economic relations between Russia and Turkey, the Turkish side proposes to proceed in mutual national currencies. The question now being discussed at the site of the bilateral Working Group on banking and financial cooperation. – Ministry of Economic Development of the Russian Federation.

Ironically, it is the United States that has been attempting to use sanctions, propaganda, and increased aggression to isolate Russia as the Eurasian nation grows in strength through the formation of a new financial and economic system that replaces the dollar, the IMF, and the World Bank. However, just as in Syria last year when it was determined that Al Qaeda rebels, not Syrian nationals were responsible for the chemical bombing of innocent civilians, a new announcement today by the White House showed a sudden backtrack from their weekend long rhetoric against Russia, which had been citing that they were responsible for the tragic take down of Malaysian flight 777. And it these examples of unsubstantiated accusations and belligerent acts directed against the Russian Federation that are the U.S., and not Russian, to become more and more isolated as seen yesterday by Turkey’s Prime Minister.

It appears in all respects that the world may be in the final acts of a systematic change to the global financial system. And in what started out as a currency war among 12 nations in 2013, is now quickly escalating past the interim step of trade wars and rushing headlong into hot war. And like the days of the Cold War three decades ago, the battle for public, economic, and military supremacy is reaching global proportions, with proxy nations like Turkey and Ukraine determining who is winning at this time in history.