Submitted by NicklethroweR via The Burning Platform blog, 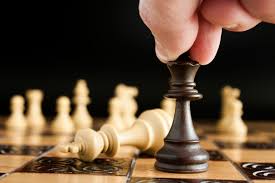 During the last 18 months or so I’ve heard a lot of talk about chess. This guy or that guy is playing chess while everyone else is playing checkers or some mastermind is playing 3 dimensional chess, etc. I find it odd that these statements are made given that only a tiny percentage of Americans know how to play chess with that number sitting around 5% or slightly over 14 million people. This is too bad because if the population, as a whole, had a better understanding of chess then the actions of President Trump would make perfect sense.

History: The school district where I was employed drastically cut its music programs and decided that chess would be an appropriate alternative to music instruction. I was not entirely opposed to this as there were published research papers extolling the virtues of chess and there appeared to be a direct relationship between playing chess and higher academic achievement. Besides, anyone can play chess while not everyone has the dexterity to be a musician. Wishing to be part of the solution, I agreed to become a coach and took on after school chess programs on three different campuses.

Our school district was kind enough to foot the bill for some necessary chess coaching and needed chess supplies. Not only that but I had the great fortune of having World Chess Champion Garry Kasparov’s former full time coach as my new teacher as the former Russian coach had relocated to the very city where I lived and had been contracted by the School District to get us up to speed. Private lessons with Kasparov’s coach! Can you imagine it?

It took my new coach all of about 30 seconds to figure out my level of chess competence which was not very high and I will paraphrase what he said next: “You are not very good and there is not enough time to teach you the correct way. But, I can teach you simple rules that will enable you to defeat anyone that doesn’t study chess full time.” He called his method “active chess” whereas a weak player like myself could use a simple formula to play the most aggressive game possible and win against stronger players. He believed that strategy flowed from tactics and his method allowed for a very fluid game of strategy.

So, what did he teach me and how does it relate to our president? Is Trump playing chess?

Chess is a game where the number of possible positions rises at an astronomical rate. By the 2nd move of the game there are already 400 possible positions and after each person moves twice, that number rises to 8902. My coach explained to me that I was not trained enough to even begin to keep track of those things and that my only chance of ever winning was to take the initiative and never give it up. “You must know what your opponent will do next by playing his game for him.” was the advice I received.

Now, I wont bore you with the particulars but it boiled down to throwing punches each and every turn without exception. In other words, if my opponent must always waste his turn responding to what I am doing then he never gets an opportunity to come at me in the millions of possibilities that reside in the game. Again, if I throw the punch – even one that can be easily blocked, then I only have to worry about one combination and not millions.

My Russian chess coach next taught me that I should Proudly Announce what exactly I am doing and why I am doing it. He explained to me that bad chess players believe that they can hide their strategy even though all the pieces are right there in plain sight for anyone to see. A good chess player has no fear of this because they will choose positions that are unassailable so why not announce them? As a coach, I made all of my students tell each other why they were making the moves that they made as well as what they were planning next. It entirely removed luck from the game and quickly made them into superior players.

My Russian coach next stressed Time as something I should focus on to round out my game. He said that I shouldn’t move the same piece twice in a row and that my “wild punches” should focus on getting my pieces on to the board and into play as quickly as possible. So, if I do everything correctly, I have an opponent that will have a disorganized defense, no offense and few pieces even in play and this will work 9 out of 10 times. The only time it doesn’t work for me is when I go against players that have memorized hundreds of games and have memorized how to get out of these traps.

With all that said, let’s see if President Trump is playing chess.

First, we can all agree that Trump, if nothing else, throws a lot of punches. We really saw this in the primaries where barely a day could go by without some scandal that would supposedly end his presidential bid. His opponents and the press erroneously thought that responding to each and every “outrage” was the correct thing to do without ever taking the time to think whether or not they had just walked into a trap. They would use their turn to block his Twitter attack but he wouldn’t move that piece again once that was in play but, instead, brought on the next outrage – just like my coach instructed me to do.

Second, Trump is very vocal in what he is going to do. Just like I had my students announced to each other their plans, Trump has been nothing but transparent about what he intends to do. After all, announcing your plans only works if your position is unassailable. It demoralizes your opponent. You rub their face in it. Another benefit to being vocal is that it encourages your opponent to bring out his favorite piece to deal with said announced plans. This is a big mistake as any good chess player will quickly recognize which piece his opponent favors and then go take them.

Time has been the one area that our president is having problems. Executive Orders and Twitter Wars have pushed the opposition off balance but he has not been able to use this time to get all of his pieces into play. The Justice Department (his Queen) is still stuck behind a wall of pawns. Furthermore, only 5 of his 15 Cabinet picks have been confirmed as of this writing. Without control over these departments, the president can fight a war of attrition but he really can’t go on the offensive. In chess, I will gladly trade a piece for a piece if it means you have to waste your turn dealing with it. It isn’t a long term strategy if you do not have all of your pieces ready to go.

In the end it would appear that Trump is playing the kind of game that I was taught to play by my coach.

His opponents are never given time to mount an attack.

Their queen – the MSM has been removed from the board and their favorite piece – the Celebrities are locked in a war of attrition while Trump gets the rest of his pieces on the board.

Remember, these are all Tactics but Strategy flows from Tactics.

Sooner or later the Left will find itself in some terrible position and the Strategy to drain the swamp will present itself.

Also, since I did mention Garry Kasparov’s, he had this to say on his Twitter feed just yesterday.

“It’s the birthday of Ronald Reagan, whose courage and moral clarity helped win the Cold War & free many millions from Communist servitude.”