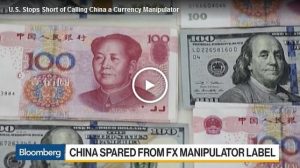 Trump to Withdraw U.S. From Postal Treaty, Squeezing China
By Justin Sink and Alyza Sebenius , published on Bloomberg, on October 17, 2018

President Donald Trump plans to withdraw the U.S. from a 192-nation treaty that gives Chinese companies discounted shipping rates for small packages sent to American consumers, another escalation of his economic confrontation of Beijing.

U.S. officials said the administration sought to revise the treaty in September and was rebuffed by other nations, prompting the decision to withdraw. The State Department will deliver a notice to the Universal Postal Union in Switzerland Wednesday, White House Press Secretary Sarah Huckabee Sanders said in a statement.

Under the union’s framework it takes a year for a country to withdraw, during which rates can be renegotiated. The officials, who briefed reporters on condition of anonymity, said postal rates wouldn’t change for at least six months, and that the U.S. would prefer to stay inside the union’s system.

The president wants to adopt “self-declared rates” as soon as practical, and no later than Jan. 1, 2020, Sanders said. “If negotiations are successful, the administration is prepared to rescind the notice of withdrawal and remain in the UPU,” she said.

“President Trump deserves tremendous credit for the administration’s focus on eliminating the anti-US manufacturer subsidy China receives from the U.S. Postal Service,” Jay Timmons, the president of the National Association of Manufacturers, said in a statement. “This outdated arrangement contributes significantly to the flood of counterfeit goods and dangerous drugs that enter the country from China.”

The group said the discounts amount to a subsidy for Chinese shippers that cost the U.S. Postal Service $170 million in 2017. The treaty sets fees that national postal services charge to deliver mail and small packages from other countries. Poor and developing countries are assessed lower rates than wealthier countries, an arrangement that has benefited China.

United Parcel Service Inc. said the administration “took the right step” in withdrawing from the accord.

“Foreign postal operators should not be given government approved advantages in what is a competitive market,” UPS said in a statement. “All parties should pay the same parcel delivery rates for the same services from the U.S. Postal Service, regardless of whether the country of origin is foreign or domestic.”

— With assistance by Thomas Black