Trump Responds To CIA Chief Brennan, Asks “Was He The Leaker Of Fake News?”

Trump Responds To CIA Chief Brennan, Asks “Was He The Leaker Of Fake News?”

Just hours after John Brennan lashed out at the president-elect in an interview with Fox News, Donald Trump has responded by suggesting that the outgoing CIA Director may have been behind the publication last week of unverified and salacious intelligence connecting the president-elect to Russia…. 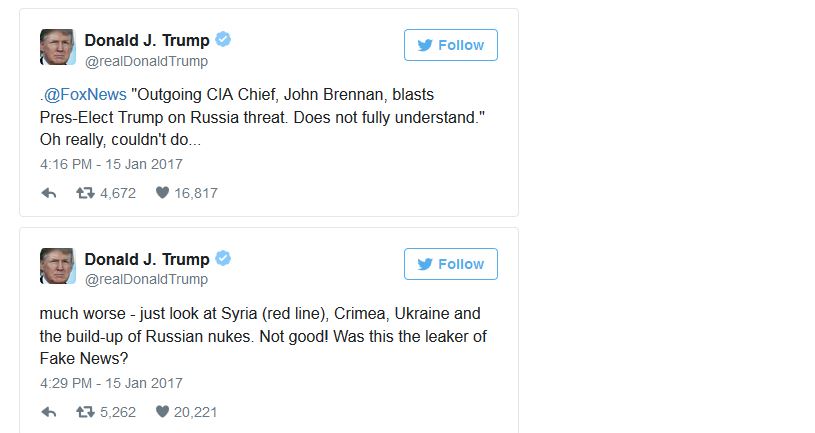 This is the most direct accusation yet in the escalating feud with Obama’s intelligence agencies. As we noted earlier, no president since John F. Kennedy has dared to take on the CIA or the rest of the national security establishment. They knew that if they opposed the national-security establishment at a
fundamental level, they would be subjected to retaliatory measures. To the extent that President Kennedy consciously stood up to the
system, he paid the price for his attempt at independent wielding of
power from the Oval Office. It is a shuddering thought. A sharp lesson in history that must not be misinterpreted. The implications for Trump are quite clear. If his refusal to take intelligence briefings, or follow CIA advice is serious,
then serious consequences will follow. If Trump is serious about peace with Putin when they insist on war, there will be a problem.

The CIA director will likely be replaced by Mr Trump’s pick Mike Pompeo next week.